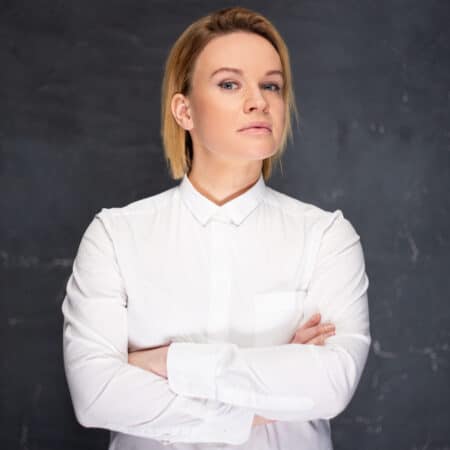 Oksana Pokalchuk is a Ukrainian lawyer, defense attorney, human rights expert with over 10 years of experience, and gender equality expert. Since 2015, she has been the Director of Amnesty International Ukraine. Before coming to Amnesty International Ukraine she worked for the European Court of Human Rights (Strasbourg). With Amnesty International Ukraine, Ms. Pokalchuk monitors whether various Ukrainian public agencies and institutions observe human rights. Before the war, her team focused on stopping domestic and gender-based violence in Ukraine, on the improvement of Ukraine’s educational system, and on the development of activism and international solidarity principle but now the team focuses on human rights violations during the war. Oksana Pokalchuk is a well-known public figure who provides her opinion on various issues to media outlets in Ukraine and worldwide through the lens of human rights. She participates in relevant public activities, such as the UN roundtable discussions and international conferences, talk shows and public discussions. She also publishes articles and op-eds in various media. As a scholar, Ms. Pokalchuk has a profound interest in the rights of women and LGBTQI+ people, transgender people in particular. She has written multiple research publications and is now working on a thesis dedicated to the reproductive rights of non-heteronormative families in Ukraine.