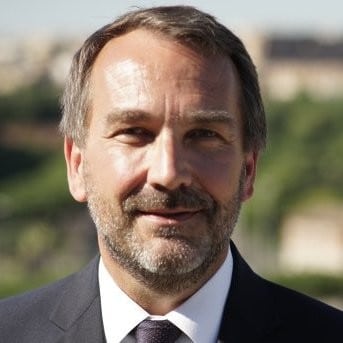 Dr. Frick has joined the WFP Global Office Germany in Berlin as Director on 2 November 2021. Prior to this assignment, he was the Deputy Special Envoy to the Food Systems Summit 2021. He served before as the Senior Director of UN Climate Change (UNFCC) where he was overseeing the implementation of the Paris Agreement and the secretariat’s Climate Action work. From 2015 – 2017, he served as Director for Climate Change at the Food and Agriculture Organization of the United Nations (FAO). As Ambassador to the international organizations based in Germany (2012-2015), he helped building up the UN’s sustainability hub in Bonn. Prior to this assignment, he led E3G’s – Third Generation Environmentalists, a leading climate change think tank – climate diplomacy work. From 2007 to 2010, as Programme Director of Kofi Annan’s Global Humanitarian Forum, Dr. Frick developed the founding narrative of climate justice. In 2007, during the German EU presidency, he was the European Union’s lead negotiator in the establishment of the UN Human Rights Council in Geneva. Prior to this, Dr. Frick served as German representative for human rights and humanitarian affairs at the UN General Assembly (2005 to 2007). From 2002 to 2005, he was Cabinet Affairs Advisor to German Foreign Minister Joschka Fischer. From 1999 to 2002 he was posted to post-crisis Albania as Consul and Deputy Ambassador. Dr. Frick has been a German diplomat since 1996. He holds a PhD in Law from Regensburg University and a diploma in International Relations from Science Po Strasbourg. He was a senior fellow at Demos, New York as well as a guest lecturer at the Hertie School of Governance in Berlin.