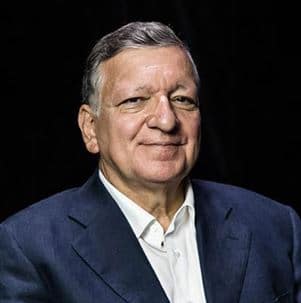 Board Chair, Gavi, The Vaccine Alliance

In September 2020, the Gavi Board appointed José Manuel Barroso as its new Chair, beginning in January 2021. Barroso served as Prime Minister of Portugal from 2002–2004 and as President of the European Commission from 2004–2014, accepting the Nobel Peace Prize on behalf of the European Union in 2012. He is currently non-executive Chairman of London-based Goldman Sachs International. In 1985, Barroso was elected for the first of several times to the Portuguese Parliament (Assembleia da República) and served as Chairman of its Committee on Foreign Affairs and Cooperation. He was successively State Secretary in the Ministry of Internal Administration, State Secretary for Foreign Affairs and Development Cooperation and Minister for Foreign Affairs. While serving as Prime Minister of Portugal, Barroso was invited by his European peers to be a candidate to the leadership of the European Commission and was elected by the European Parliament for two terms as President of the European Commission. Currently, Barroso is a Visiting Professor at Universidade Catolica Portuguesa and Director of the Center for European Studies at its Institute for Political Studies. He is a Visiting Professor at the Graduate Institute of International and Development Studies in Geneva and teaches at the School of Transnational Governance of the European University Institute in Florence. He is a Non-Resident Senior Fellow with the Liechtenstein Institute on Self-Determination at Princeton University. Earlier in his career, he was a teaching assistant at the Universities of Lisbon and Geneva, and a Visiting Professor at Georgetown University, Princeton University and the University of Geneva. He has published several books and articles in academic journals on political science and international relations. Barroso graduated in Law (Licenciatura) and obtained a Master in Law from the University of Lisbon, as well as a Master in Economic and Social Sciences/Political Science from the University of Geneva. He also holds a post-graduate diploma from the University Institute of European Studies in Geneva. Barroso has received numerous honorary distinctions from countries around the world.