Yemen: Is the war nearing an end?

The MED This Week newsletter provides expert analysis and informed comments on the MENA region’s most significant issues and trends. Today we turn the spotlight on Yemen, where a nationwide truce serves as the backdrop for the inauguration of a new presidential council tasked with managing the country and leading the peace efforts with the Houthis.

The MED This Week newsletter provides expert analysis and informed comments on the MENA region’s most significant issues and trends. Today we turn the spotlight on Yemen, where a nationwide truce serves as the backdrop for the inauguration of a new presidential council tasked with managing the country and leading the peace efforts with the Houthis.

Yemen has a new Presidential Leadership Council. On April 7th, the country’s exiled President Abed Rabbo Mansour Hadi formally stepped down and delegated his powers. Twelve days later, the eight-member council took office after a rare Parliamentary session in the interim capital of Aden. Under the leadership of the Yemeni veteran and politician Rashad Al-Alimi, the presidential council is expected to run the country for a transitional period and address Yemen’s thorniest issues. Together with crumbling public services and a falling currency, the council will be responsible for finding a solution to the ongoing violence and holding talks with the Iran-backed Houthis (who control the country’s northwest region and Sana’a, Yemen’s capital). From their side, Saudi Arabia and the United Arab Emirates welcomed the transfer of power to the presidential council and promised a $3 billion aid package to shore up the Yemeni central bank. Currently, Yemen enjoys a two-month-long truce agreement brokered by the United Nations and Saudi Arabia. The first one in six years, this ceasefire has raised hopes for a reduction in violence and an improvement of the country’s terrible humanitarian crisis, further exacerbated by the global repercussions of the ongoing crisis in Ukraine. However, the guns have never fallen silent as the Houthis recently resumed their attacks on Marib, the energy-rich government stronghold. The rebel group has also repeatedly shown it can attack infrastructure in Saudi and Emirati territories with drones and ballistic missiles. While the fighting is not as intense as it used to be, these recent developments raise questions around the group’s intentions and the likelihood of a permanent ceasefire in the near future. The status quo also tests the Saudi and Emirati desire to define a common strategy to end a conflict that has spilled over across the Gulf and turned into a quagmire. 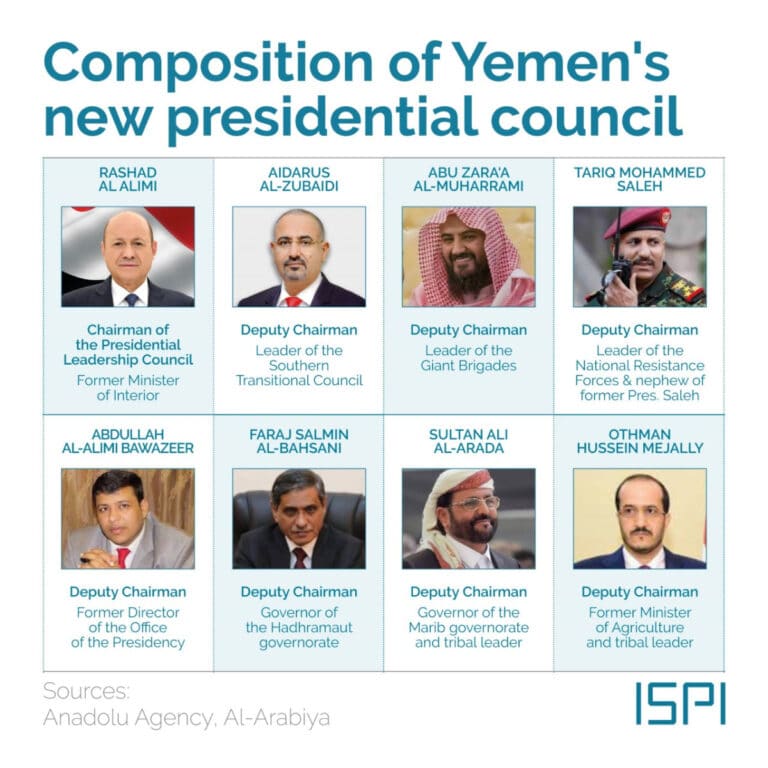 Experts from the ISPI MED network react to the recent appointment of a new presidential council in Yemen and the preservation of the national truce.

A giant umbrella against a common foe

“The newly established presidential council in Yemen is an anaemic attempt to unite anti-Houthi factions based on geographical and political affiliations. Its major flaw is that it is not a true representation of Yemen’s political groups and regions. However, suppose the members of this council seriously move to resolve their significant differences and work together to strengthen the internationally recognized government’s (IRG) legitimacy on the ground, such as by bolstering state institutions and enhancing public service delivery. In that case, the council may be able to lessen the economic, humanitarian, and security issues in IRG territories. Nonetheless, Yemen observers should be cautiously optimistic about the council’s capacity to resolve Yemeni hardship, and more importantly, for the council to agree with the Houthis on the future of Yemen.”

“The three-billion-dollar aid package pledged by Saudi Arabia and the United Arab Emirates (UAE) in support of the Central Bank of Yemen could go a long way to helping ameliorate the ongoing crisis in the country’s monetary sector, in addition to helping boost efforts to combat its ongoing humanitarian crisis. That being said, in some regards, it’s only one more comprehensive step to tackle the more systematic, structural issues constricting the Yemeni economy. The country’s government continues to lack sufficient revenues to avoid relative insolvency. Simultaneously, the fallout of the ongoing conflict continues to strangle the Yemeni private sector, development, and foreign investment. These challenges are likely to continue to profoundly affect Yemen’s economy until some more comprehensive settlement is reached.”

“The Ansar Allah (Houthi) movement is a secretive and opaque organization that discourages public debate on public issues. Therefore, we can only guess their true strategy and real position on the ceasefire. Overall, there are two factions in the movement, the Jihadists and the pragmatists. The Jihadists have a millennial mission to fight until they liberate Mecca, Medina, and Jerusalem. The pragmatists appreciate the need to end the war as the population under their control has reached its endurance limits. Recent setbacks and the horrendous loss of life during their two-year campaign to take over the city of Marib have strengthened the pragmatists and brought them much closer to the peace table. In addition, ongoing secret negotiations with Saudi Arabia in Muscat seem to be moving toward a deal: a prerequisite to any serious Houthi negotiations with their Yemeni adversaries. The ceasefire will hold as long as the Houthis and Saudis keep talking.”

“For Saudi Arabia and the UAE, this truce pursues two objectives: de-escalating the Houthis’ missile and drone attacks whilst coalescing a real Yemeni anti-Houthi front. Both these purposes are hard to achieve, although the truce is an encouraging step. Saudi Arabia will not have a viable military exit strategy from Yemen as long as the Houthis continue to hit the kingdom and economic targets in the Red Sea. Border security remains Riyadh’s fundamental goal. In the last decade, the Saudi leverage in Yemen has reduced: the appointment of the Presidential Council also aims to strengthen the kingdom’s position in the political process. For the UAE, the reality is quite the opposite: Abu Dhabi has gained remarkable influence in Yemen because of the war. The Emiratis are currently willing to preserve the geostrategic projection they acquired in — and from — Yemen’s coasts and islands. Their leverage is emphasized by the presence of many UAE-backed military leaders in the Presidential Council board. While the truce goes into effect, the launch of the US-led Combined Task Force 153 in the Red Sea, Bab el-Mandeb, Gulf of Aden, fits the Saudi and Emirati strategies in Yemen: it (also) targets weapons smuggling, thus sending a message to the Houthis and Iran.”

The spillover of the Ukraine war into Yemen

“Yemen already experienced one of the world’s worst humanitarian crises before the war in Ukraine. When I visited the country recently, I saw the fallout from prolonged conflict, a defunct economy, and shortages in humanitarian funding. Families are living off one meal a day. Mothers are using only flour and cooking oil to feed seven mouths. Men are cutting wood on the side of the road because they cannot afford to purchase fuel. Since Yemen is reliant on Ukraine and its neighbours for 40% of its wheat supply, the war in Ukraine will create a supply problem. But the reality is these resources were already out of reach for most Yemeni families because they could not afford the high prices of goods. Now, however, supply shortages of food staples and fertilizers mean meals are even further out of reach, with the future of agricultural harvests growing unpredictable. Overall, solidarity and support for Ukraine will come at a cost to Yemen and other urgent humanitarian crises around the world.”