The MED This Week newsletter provides expert analysis and informed comments upon the MENA region’s most significant issues and trends. Today, the focus is on Iran, where widespread protests over the killing of 22-year-old Mahsa Amini have shaken the country for the last two weeks, posing a new existential challenge to the Raisi administration. For almost

The MED This Week newsletter provides expert analysis and informed comments upon the MENA region’s most significant issues and trends. Today, the focus is on Iran, where widespread protests over the killing of 22-year-old Mahsa Amini have shaken the country for the last two weeks, posing a new existential challenge to the Raisi administration.

For almost two weeks now, Iran has been shaken by a social earthquake. The tremor that sparked this event was the death of Mahsa Amini, a young Kurdish woman who died whilst in custody on September the 16th after being arrested by the morality police for allegedly not wearing the hijab in accordance with government standards. However, the overwhelming resentment underlying these demonstrations is something that many women throughout Iran have felt for decades. Protests began in Saqqez, Amini’s hometown in the Kurdish region, rapidly spreading to most of the country’s 31 provinces, and were mostly led by young Iranian women. Within days, the uprising had become national, with thousands of demonstrators openly calling for regime change. To curb what it defined as a “foreign plot” and an act of “sedition”, the government has adopted similar tactics that have enabled it to quell protests in the past: counter-demonstrations, internet cuts, and violent suppression. According to the Oslo-based Iran Human Rights, the death toll stands at 76 victims, far higher than the official numbers published to date. As a result of the internet blackout, communications from Iran are sporadic, and it is difficult to assess what is happening within the country. Meanwhile, the violent repression of the protests continues to drawcondemnation worldwide. On September the 26th, the US Treasury sanctioned the Iranian morality police (a provision soon followed by Canada) and authorised American technology firms to provide additional internet services to Iran. While it is difficult to predict the unrest’s outcomes and impact upon the regime’s tenure, it is not difficult to imagine that any government victory will be pyrrhic unless it is willing to meet the population’s demands for decent economic and socio-political conditions. 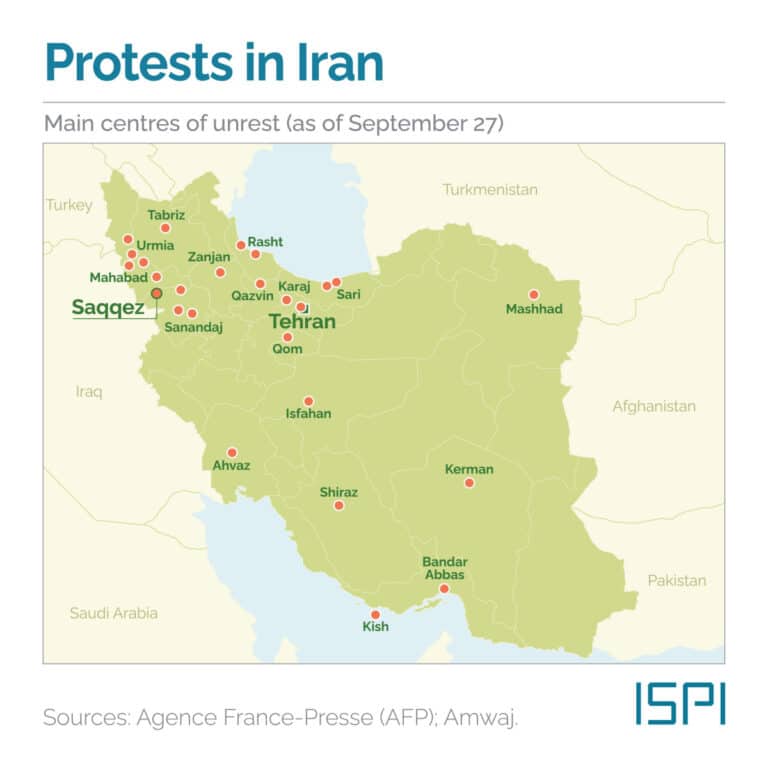 Experts from the ISPI MED network react to the wave of national dissent currently underway in Iran following the murder of the young Kurdish woman, Mahsa Amini.

Iran’s government has a long history of quelling unrest

“Public protests within Iran have become more frequent in nature ever since 2017. They have been sparked by various socio-economic factors such as water shortages, increased petrol prices, low wages, and low pensions. The latest round of protests was initiated in response to the brutality of the regime forces in implementing the state-defined code of conduct for women’s attire in public spaces. The killing of Mahsa Amini outraged Iranians. Like the many previous uprisings, people have openly rejected the Islamic Republic in Iran, and have demanded a complete regime change. The slogans that are being used in these demonstrations reveal that people have all but lost hope for reform, and instead ask for a complete collapse of the current political system. The regime’s response to the protesters has always been heavy-handed and brutal in nature. This has led to the killing of dozens of people in the demonstrations so far. It has outraged the Iranians in the diaspora, who arranged large-scale demonstrations in various cities around the world in solidarity with their fellow citizens while repeating the same demand for a regime change. The protestors have called on the international community for its support. It is hard to predict the results. However, it is clearly evident that while the regime is unable to control the public anger or manage their expectations, it is not shy of using brutal measures of suppression.”

“Every single Iranian family can relate to what happened to Mahsa”

“What is remarkable about the current wave of protests is the level of solidarity created by their trigger event: the arrest and death of a young woman only 22 years of age. Almost every family in Iran can relate to what happened to Mahsa Zhina Amini, and what her parents and family have had to endure. In addition to an enormous societal bond, statements by former and current officials indicate that some members of the political elite also feel this solidarity. It is here that I see potential for gradual change in the aftermath of these protests. Unfortunately, this will be too little too late for some, while it is just the right way forward for others. We must at all times take both perspectives into consideration.”

Adnan Tabatabai, Co-Founder and CEO, Center for Applied Research in Partnership with the Orient (CARPO)

The establishment-population divide is not simply a generational matter

“It’s not a generational clash per se, despite Iran’s Generation Z and women being at their forefront. And, of course, there is a generational divide in Iran: A relatively young and cosmopolitan population with the desire to live a free and prosperous life is ruled by a geriatric Islamist establishment that thrives in isolation and repression – the contrast couldn’t be starker.

These protests are characterised by unprecedented fervour and ferocity, not least due to the heavy presence of courageous women and youth, as well as quite a wide-ranging social composition in terms of class and ethnicity. Regarding class, it de facto combines the social bases of the 2009 Green Movement (primarily, the urban middle class) – albeit a younger generation now – and the recent nationwide 2017/18 (Dey) and 2019 (Âbân) protests (driven by the lower classes). And now, universities and workers have also entered the arena. Regarding ethnicity, we witness considerable solidarity between various ethnic groups in Iran, despite the regime’s attempts to ethnise the protests to divide and rule.

As such, it arguably represents the most serious threat to regime stability and survival in the four-decade history of the Islamic Republic. Analysing the momentous Dey Protests, I had argued that they represented the start of a “long-term revolutionary process” within Iran – similar to that in the Arab world: The present uprising could be read as a validation of this thesis.”

The internet shutdown won’t quell “the thirst for reforms”

“In 2009, Iranians were among the first to systematically use social media platforms to organise their resistance in support of reforms. With the current protests in 2022, they are spearheading novel forms of “e-organisation”, for instance, through a new Android App developed by tech-savvy Iranian entrepreneurs. The App encrypts up to 1,000 characters of Persian text into an undecipherable jumble of words. This mélange can be sent to anyone over any communication platform – Telegram, WhatsApp, Google Chat, etc. – and deciphered through the App to get around any censorship administered by the state through the track-and-trace software. Instead, the widely cited internet equipment that Elon Musk promised represents nothing but grandstanding in that regard (the hacking campaign of Anonymous, however, has been very well received in Iran). Of course, the internet blackout enforced by the Iranian security organs may hamper some of these efforts. Still, they do not quell the thirst for reforms in Iran as the recurrent protests in the last decades demonstrated.”

Mahsa, a “catalyst” for two causes of dissent: Women’s rights and minority rights

“The Islamic Republic of Iran is ruled by an authoritarian regime that violates civic liberties and political rights. Ethnic minority rights, women’s rights, civil rights and freedom of expression are all actively suppressed through legislation and extra-judicial intimidation, even so far as brute force. These measures work in tandem; opposition to them is typically segmented. This has been a significant weakness of the opposition to the regime. The killing of Mahsa Zhina Amini has become a catalyst to bring together two causes of dissent: ending state mistreatment of women, and ending the economic and political marginalisation of Kurds and other ethnic minorities. Against the backdrop of pent-up frustration with the economic crisis and nepotism, this merger of grievances has elevated the protests into a national revolt. The protesters see the regime in its entirety as responsible for their suffering, and ask for an ‘end to dictatorship’. Iran protests present an existential threat to the ruling regime and its system of government.”

With Tehran, Washington is pursuing a two-handed approach

“The Biden administration has shown that it can walk and chew gum at the same time by strongly condemning human rights abuses in Iran while continuing to support a diplomatic rollback of Iran’s nuclear program. The US has also sought to facilitate Iranians’ ability to communicate with each other and the outside world by authorising exports of crucial technology to Iran. Even before the protests broke out in the aftermath of the death of Mahsa Amini at the hands of Iran’s so-called “morality” police, the main obstacle to reviving the Joint Comprehensive Plan of Action (JCPOA) was in Tehran, not Washington. Iran has continued to demand guarantees that a future US administration will not withdraw from the JCPOA again, and has tried to force an end to the International Atomic Energy Agency’s probe of unexplained uranium traces by tying this to the JCPOA. Both demands are nonstarters. It is up to Iran to adopt a more flexible approach. Otherwise, its pariah status will only deepen for multiple reasons.”