War in Ukraine: A food crisis in the MENA region?

The MED This Week newsletter provides expert analysis and informed insights on the most significant developments in the MENA region, bringing together unique opinions on the topic and reliable foresight on future scenarios. This week, we focus on the rise in food prices that the MENA region is experiencing in the wake of the Russia-Ukraine war.

The MED This Week newsletter provides expert analysis and informed insights on the most significant developments in the MENA region, bringing together unique opinions on the topic and reliable foresight on future scenarios. This week, we focus on the rise in food prices that the MENA region is experiencing in the wake of the Russia-Ukraine war.

With a war at the doorstep of the European Union, global cereal supplies are now facing shocks unseen in decades. Today, Russia and Ukraine together account for 29% of the world’s wheat supply. As the escalating conflict between Moscow and Kyiv has further increased the threat of food insecurity, grain-importing countries must prepare for the far-reaching end of supply. This holds true particularly when it comes to a region where food insecurity is a constant threat, with just a few exceptions. As Putin’s forces are gaining ground in Ukraine, a further increase in the price of bread could severely destabilise MENA countries. Rising costs would inevitably challenge states such as Turkey, which imports essential cereal supplies from Russia and Ukraine. The same applies to most economies in the Arab world, such as Egypt – the world’s largest wheat importer – Algeria, and Tunisia. Spiralling food costs and a similarly intense rise in energy prices have flared widespread public anger in these countries, specifically in relation to bread which is a politically charged commodity. Morocco is less dependent on cereal imports than its Maghreb neighbours but is experiencing its worst drought in decades. As a result, a surge in food costs could force the kingdom to increase imports and subsidies. As the largest importers of barley globally from Ukraine and Russia, oil-rich monarchies like Saudi Arabia fear a severe impact on their livestock industry. Nonetheless, war-torn and fragile states that are dangerously close to famine, such as Lebanon, Syria and Yemen, would probably face the worst outcomes. With the conflict unfolding in Ukraine, these countries are likely to face swift food prices increase that, in turn, could exacerbate the appalling humanitarian conditions. 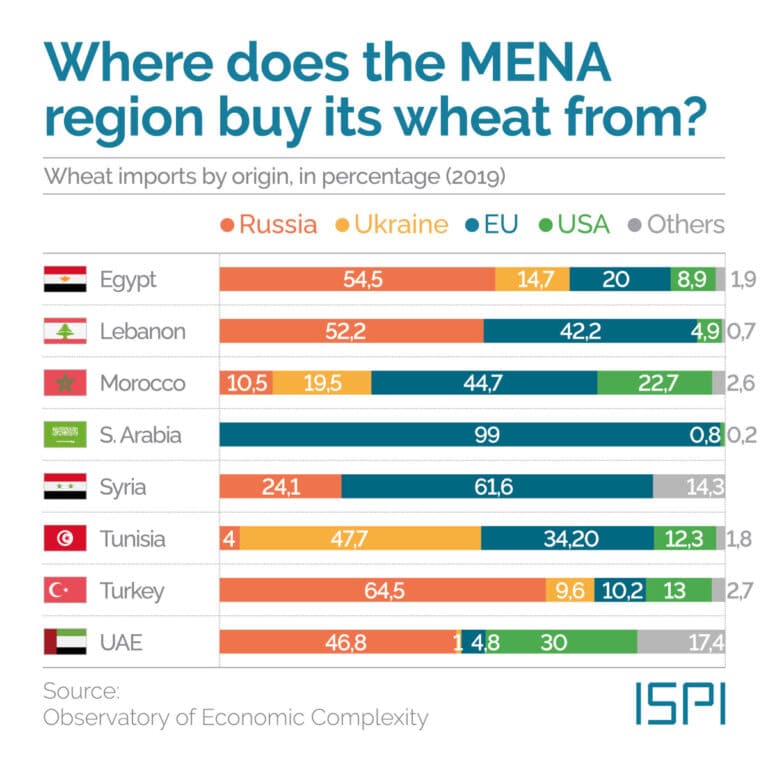 Experts of the ISPI MED network react to the consequences that higher food prices in the aftermath of Ukraine’s invasion could have in the Middle East and North Africa.

“Russia ranks first, and Ukraine ranks second for Turkish imports of agricultural products. In 2020, 78% of Turkish wheat imports came from Russia and Ukraine. Thus, Turkey will not only be affected by the halt of wheat imports from Ukraine, but the imports from Russia may also take a hit because of sanctions or disruptions on the supply chain. Therefore, the moment of Russia’s invasion of Ukraine could not have been worse for Ankara from an economic perspective. Recent official inflation data – before the Russian invasion – show that food prices rose 64.4% year-over-year in February, compared with overall consumer price inflation of 54.4% in the same period. However, in reality, consumer food prices have reportedly doubled since last year. Moreover, since the war broke out, the cost of fuel is also rising at the global level, food prices are soaring, and fertilizers are more expensive. Given the already high inflation and difficult economic situation in Turkey, this would only increase the threat of food insecurity in the country.”

Wheat: The shaky pillar of the Egyptian economy

“Together with tourism, international trade will be the pillar where the Ukrainian crisis will impact Egypt the most. In this regard, cereals – especially wheat and corn – are on top of the commodities that the crisis will negatively affect. As for corn and soybeans, Egypt imported $1.7 and 1.4 billion in 2019, respectively, and their prices increased by up to 50% immediately after the outbreak of the conflict – which, in addition, will undoubtedly affect the prices of local meat. As for wheat, Egypt is the largest importer globally. Among grain exporters, Russia is ranked first, and Ukraine comes fifth. The price of this commodity rose by 18% immediately after the outbreak of the conflict, and there is no doubt that if this rise continues, it will negatively affect the net fiscal deficit, let alone the availability of sufficient wheat for consumption in the medium and long runs – especially in the event of a prolonged conflict.”

“The rise in wheat prices risks to severely affect Tunisia, both in economic and political terms. Importing approximately 70% of its cereals needs, Tunisia is highly exposed to food inflation. More than half of its wheat imports come from Russia and Ukraine. The government has denied the possibility of intervening in the food subsidies system. Still, fears are rising about its economic sustainability in the long term due to the harsh economic crisis the country is facing.

The fragile Tunisian food system has already shown signs of distress. In recent months the government has been unable to pay for wheat shipments (with ships waiting for weeks in front of the Tunisian coasts), and shortages of products like flour and semolina have been recorded. The government blames speculators and administrative dysfunctions, but the real question is if it will be able to face the economic burden of rising prices and ensure supplies and if the current crisis will exacerbate already existing social tensions.”

The drought and rising food costs: Another challenge for Rabat

“Rising food and commodity prices from disruptions to global supply chains, inflation, and the impact of a drought that is devastating the domestic agricultural sector is causing Moroccans to express growing anger at the government’s inability to institute economic security and growth. Since the start of the year, protests have taken place in nearly forty cities and towns around the country, as Moroccans struggle to afford the rising cost of food.

Morocco’s agricultural sector, a key economic engine, is highly dependent on often-limited rainfall, so the drought and the high cost of food imports are adding to the challenges Moroccans are faced with, following over two years of economic disruption from the pandemic. So is the disruption of the Russian invasion to Ukraine—from which Morocco imports wheat. The government is trying to alleviate some of the current pressures by providing farmers’ support and subsidizing local markets to keep prices down. However, the challenge is that the current hardship highlights the consistent failures of successive governments to prioritize economic and social development and increase the population’s financial resilience. The economic progress that Morocco has realized over the past decade has not meant more security for its citizens, and this is what the current crisis is ultimately about. It highlights the consistent economic fragility of many Moroccans and on that Rabat will have to make up for lost time as it navigates the ongoing economic impact of the pandemic.”

Gulf monarchies: Nothing to celebrate

“Ukraine and Russia are responsible for about one-third of global wheat exports. Their wheat is of lower quality and their share in the GCC markets is not as high as in poorer MENA countries such as Egypt. Still, a decline in wheat exports from the Black Sea region would lead to rising wheat prices across the board. Furthermore, Saudi Arabia is the world’s largest importer of barley, which it uses as animal feedstock. Most of its supplies come from Ukraine and Russia, so its livestock industry would be affected. Limits on supply could happen for three reasons: a) crop losses (harvest time is in the summer), b) logistical problems (most exports go through western Black Sea ports like Odessa), c) trade financing and payment processing problems due to sanctions. How much of this will materialize remains to be seen, but in any case, at least transaction costs are likely to rise. Since Russia and Ukraine are also fertilizer exporters, a collapse of such exports could also affect wheat production in other countries.”

“While Lebanon’s government did not cause the Ukraine crisis, significant negligence on its part has left the country with a looming food security crisis that threatens to destabilise it further. Before the current conflict, the country met over three-quarters of national wheat demand from Ukraine and Russia – both of which have now halted their exports. For decades, experts have asked the government to diversify, maintain a strategic reserve, ramp up local production, and introduce food security reforms, but almost nothing has been done. Now diversification of supply will not work. Lebanon is a price taker, even more so when prices rise. Changing diets and ramping up local production will take time the country does not have during an economic meltdown. It’s not far-fetched to think such a crisis will be used as yet another excuse to delay the May 2022 election or deepen existing patronage networks. Neither of these possibilities provide a positive forecast for change in the country.”

Syria: Towards a deeper economic crisis

“With the crisis unfolding in Ukraine, Syria will be forced to re-assess the source of its supply of wheat to the country, previously provided by Russia. In the past few years, the Syrian regime has announced that it was already facing difficulties in buying wheat through tenders with Russian companies for financial reasons. This situation, coupled with the severe economic crisis, will force the regime to re-allocate its already diminishing budget to buy 1.5 million tonnes of wheat, whose price is at its highest in 14 years. While Caesar sanctions do not address food exports to Syria, it will be difficult for the regime to buy wheat from other countries due to shipping costs and domestic laws that ban wheat export, such as Hungary. On the other hand, Russia is facing unprecedented western sanctions that are hurting the economy and may be reluctant to simply send free wheat to Syria.”

Yemen: where the picture is going to be worse

“In light of Russia’s war with Ukraine, food shortage is increasingly representing a cause for concern in Yemen as it imports approximately 40% of its wheat from Russia and Ukraine. The continuation of the conflict has implied that national food supplies will further suffer. Thus, this will affect the already devastating humanitarian situation that the war-torn country has been experiencing since 2014. In addition, the exponential rise in oil prices is another crisis Yemen is facing as it is increasing the price of goods and transportation. Even if food is available, people cannot afford it, given their ongoing economic hardships. International organizations will struggle to continue their work and most food programs will be forced to stop their work or serve lesser numbers due to the lack of food or increase in prices.”