The MED This Week newsletter provides expert analysis and informed insights on the most significant developments in the MENA region, bringing together unique opinions on the topic and reliable foresight on future scenarios. Today, we turn the spotlight on Turkey, as Erdogan recently visited Saudi Arabia for the first time in nearly five years. This is

The MED This Week newsletter provides expert analysis and informed insights on the most significant developments in the MENA region, bringing together unique opinions on the topic and reliable foresight on future scenarios. Today, we turn the spotlight on Turkey, as Erdogan recently visited Saudi Arabia for the first time in nearly five years. This is just the last step in Ankara’s renewed diplomatic dynamism at the regional level to relaunch its role.

After years of tensions, Turkey and Saudi Arabia are attempting to rebuild their bilateral ties. On April 28th, Turkish President, Recep Tayyip Erdogan, embarked on a landmark journey to the Red Sea coastal city of Jeddah, where he met King Salman and the Crown Prince Mohammed bin Salman. This is his first visit to the Kingdom since the killing of the journalist Jamal Khashoggi in the Saudi embassy in Istanbul nearly five years ago. Khashoggi’s murder produced a deep, years-long fracture between Ankara and Riyadh. However, over the past year, Turkey has sought to mend its relations with Gulf monarchies in the framework of a wider recalibration of its regional foreign policy, in its search for ways to break away from diplomatic marginalisation as well as to support its economy. Overall, Ankara’s rapprochement with Riyadh is a significant step in the normalisation of Turkey’s diplomatic relations with its neighbours in the Mediterranean and the Middle East. Ahead of Erdogan’s visit to Saudi Arabia, Turkish and Emirati trade ministers also met in Istanbul to find common ground to boost their economic partnership, launched after the visit of UAE Crown Prince Mohammed bin Zayed al-Nahyan to Turkey last November. Recently, Ankara has also improved relations with Israel, as Erdogan received President Isaac Herzog in March. In the Eastern Mediterranean, Turkey and Greece have opened channels of dialogue, despite long-standing problems and complaints from Athens about Turkey’s constant violations of Greek airspace in the Aegean. Conversely, normalisation efforts with Egypt have so far proved to be more difficult, considering that relations with Cairo had been frozen since the coup that overthrew the Turkey-supported government of Mohammed Morsi. The bottom line of this Turkish intense diplomatic activity in the broader Mediterranean goes hand in hand with its attempts to mitigate the instability caused by the war in Ukraine and maintain the balance of power in the Black Sea. Overall, the country’s renewed dynamism and mediation in the Ukraine war have put it back under the international spotlight. 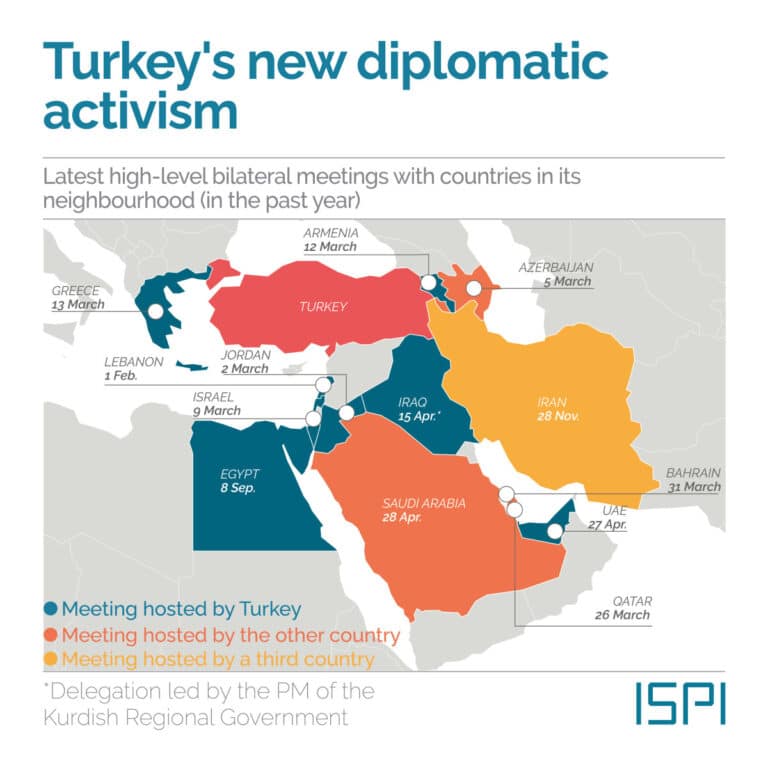 A turning point in Turkish-Saudi ties

“Erdogan’s visit to Riyadh is part of Turkey’s ongoing outreach to its former antagonists to mend ties and wider de-escalation across the region. Symbolically, this visit is a setback for Erdogan and Turkey’s image amongst the pro-Arab Spring or conservative/Islamist sections of society across the region. Turkey’s halting of the judicial case into the murder of Jamal Khashoggi and transferring it to Saudi Arabia was another manifestation of the politicisation of Turkey’s judicial system and has further tarnished Ankara’s image. Economically, although Turkey’s deepening economic downturn is a major driver behind Ankara’s de-escalation on foreign policy fronts, Turkish – Saudi trade volume was modest, even during its heyday. In spite of Saudi Arabia’s lifting of its undeclared economic embargo on Turkey, this picture is unlikely to change in any significant way. However, if Turkish and Saudi Central Banks sign a SWAP deal, this would be noteworthy. Geopolitically, the anti-Iran posturing can form a common ground between both sides in regional politics. Yemen might prove to be the testing ground of this posturing. For Turkey, breaking its isolation in the Eastern Mediterranean was also a core motivation behind its policy of regional normalisation so that it could undermine the internal cohesion of the anti-Turkey bloc and drive wedges between them. However, this visit should not be seen as an outcome of the reconciliation process. Rather it should be regarded as part of it. The thaw in the relations is still fragile. Whether there will be a reciprocal visit from Saudi Arabia to Turkey would shed more light on the future of this thaw.”

“The economic interaction between the UAE and Turkey constitutes the bedrock of their recent normalisation. Given the untapped potential of the two countries in this domain and the fact that the bilateral trade volume is way below the 2017 record of around $15 billion, there is room for boosting trade, investment, and business to unprecedented levels. Ankara and Abu Dhabi aim to double the current figures. Besides the obvious mutual interest in promoting a complex economic interdependency in the post-COVID-19 era, enhancing the economic interaction will likely cement the reconciliation between the two states and take the Emirati-Turkish relations in the political and defence realms to the next level. Whether the UAE and Turkey would realise their ambitious goals in this domain will likely depend on several factors: first, further strengthening the institutionalisation of the relations. Secondly, creating an effective mechanism to contain and solve any political fault out that may stem from opposing perspectives on some geopolitical issues in the future. And finally, on the extent to which the international and regional dynamics that prompted the normalisation in the first place will continue to sustain it.”

Israel: no more a regional competitor

“The positive momentum in Turkey-Israel relations following the visit of Israel’s President, Isaac Herzog, to Turkey continues. In the past month, several events have contributed to building this momentum. First, Turkey condemned terror attacks that occurred in Israeli cities during late March and early April. Second, the Turkish response to events in Jerusalem during Ramadan was relatively restrained compared to the past (when it openly criticized Israel) and Turkey’s President Erdogan conveyed constructively in a phone conversation with Herzog his concerns over the developments in Jerusalem. Third, there were reports in the media about the deportations of several Hamas military operatives from Turkey. The issue of Hamas military operations orchestrated from Turkey’s soil has been a bone of contention between the countries for several years now. Finally, Turkey’s Foreign Minister and Energy Minister are expected to arrive in Israel in late May. The rapprochement between the two countries is occurring in a period in which Turkey is also improving its relations with other Middle Eastern states. In this respect, the different rapprochements reinforce one another and are one of the reasons for Ankara’s more restrained approach when it comes to Israel.”

“Since the coup that brought Abdul Fattah al-Sisi to power, Ankara has been one of the staunchest critics of the Egyptian President. Problems in Turkish-Egyptian relations have often taken a regional dimension, with consequences in the eastern Mediterranean and Libya. At this moment, normalising relations with Egypt represents for Turkey a further step towards ending its regional isolation while opening up new avenues of cooperation in the Mediterranean. On the other hand, Cairo is interested in reducing Ankara’s support for the Muslim Brotherhood and in stepping up its political role in the region, also in light of the relative marginalisation it has experienced after the Abraham Accords. Even though the two parties have often declared that negotiations were achieving concrete results, there are still a few challenges in the way. Turkey’s presence in Libya, the Horn of Africa, and its growing involvement in Ethiopia pose serious obstacles to the normalisation process. The two countries share a mutual mistrust, and although bilateral economic relations continue to flourish, Ankara and Cairo’s conflicting geopolitical interests are still limiting their dialogue efforts.”

No more troubled waters between Athens and Ankara

“Last month’s meeting between the Greek Prime Minister Kyriakos Mitsotakis and the Turkish President Recep Tayyip Erdogan heralded a new attempt to change the course of bilateral relations between Greece and Turkey, which had sharply deteriorated since the signature of the Libyan-Turkish memorandum of November 27th 2019. Russia’s invasion of Ukraine has raised the significance of NATO and its membership for Greece and Turkey. It has highlighted the existence of common security concerns for Greece and Turkey, which necessitate the presence of dialogue channels and communication. Understanding this does not mean that long-standing problems have been overcome or that airspace violations in the Aegean would not meet with official diplomatic reactions. Instead, it means that both countries agree to establish a communication channel, which can help manage the impact of adverse developments and provide an opportunity for more constructive dialogue on the topics where both sides identify mutual interests and concerns.”

Ukraine absorbs much of the Turkish diplomatic effort

“As there is no end in sight for the Ukraine war, Turkey is likely to have to continue its uneasy balancing act between Russia and Ukraine. Ankara has vital interests at stake in maintaining relations with both countries and its priority is to safeguard them. Energy and economy are the main drivers of Turkish-Russian cooperation. Russia is Turkey’s main gas supplier and ranks among its top three trading partners, after Germany and China. Last year, Russians also accounted for 19% of foreign visitors in Turkey, where tourism contributes to 10% of the country’s overall GDP. This explains why Ankara, also looking at its fragile economy, has not joined Western sanctions against Moscow. On the other hand, Ukraine is not less important in Turkey’s calculus. Beyond flourishing economic and defence relations with Kyiv, Ankara strongly supports Ukraine’s territorial integrity and sovereignty, which are important to maintain the balance of power in the Black Sea and avoid it turning into a Russian lake. Against this backdrop, Turkey is actively playing a mediation role in the framework of a wider recalibration of its foreign policy. While it remains to be seen what the results of this mediation will be, unexpectedly this war has brought Ankara to the centre stage of an intense international activity, breaking last years’ isolation. And so far, this has proved to be a significant outcome for the Turkish leadership”.