Turkey: When International Ambitions Must Come to Terms with Economy

The MED This Week newsletter provides expert analysis and informed insights upon the most significant developments in the MENA region, bringing together unique opinions on the topic and reliable foresight on possible future scenarios. Today, we turn the spotlight upon Turkey, where economic fragility at a national level is the backdrop for intense diplomatic activity abroad,

The MED This Week newsletter provides expert analysis and informed insights upon the most significant developments in the MENA region, bringing together unique opinions on the topic and reliable foresight on possible future scenarios. Today, we turn the spotlight upon Turkey, where economic fragility at a national level is the backdrop for intense diplomatic activity abroad, especially with its Western NATO allies.

On July the 4th, the latest data on Turkey’s economy showed that its annual inflation rate rose to 78.62% during the month of June, reaching its highest peak in over twenty years. To make matters worse, the Turkish lira dropped by almost half against the US dollar over the past year, aided by President Erdogan’s unconventional monetary policy to reduce inflation and interest rates to stimulate economic growth. The current conflict in Ukraine has hit the Turkish economy even further, given its high reliance upon energy and food imports. However, in spite of a precarious economic situation, Turkey has striven to promote itself as an active actor within the international arena. For months, Ankara has indeed surfaced at the centre of intense diplomatic activity to mediate several dossiers of the Russian-Ukrainian conflict. The Turkish government has been trying to capitalise on this increased role, with Erdogan always keeping an eye on national interests when sitting at international negotiations’ tables. For instance, during the NATO summit in Madrid (June the 28th), the Turkish president negotiated Sweden’s and Finland’s renouncement to support Kurdish groups considered to be terrorists by Ankara for his personal acceptance of them into the Atlantic Alliance. Again, in the Spanish capital, he has tried to settle unresolved issues with the President of the United States, Joe Biden, starting by reconsidering Washington’s blockade upon selling F16 fighter jets to Turkey after Ankara’s controversial decision to purchase Russian S-400 anti-aircraft systems. On July the 5th, Erdogan welcomed in Ankara an Italian delegation led by President Mario Draghi, with whom he discussed energy-related critical problems, the food crisis, the conflict in Ukraine, and the Libyan file. Overall, it appears that Turkey is determined to recreate a climate of confidence by reinstating relations with Western countries, which will be necessary to bring back much-needed foreign capital into the Turkish economy. As the presidential elections near, Erdogan needs indeed to secure some concrete results. 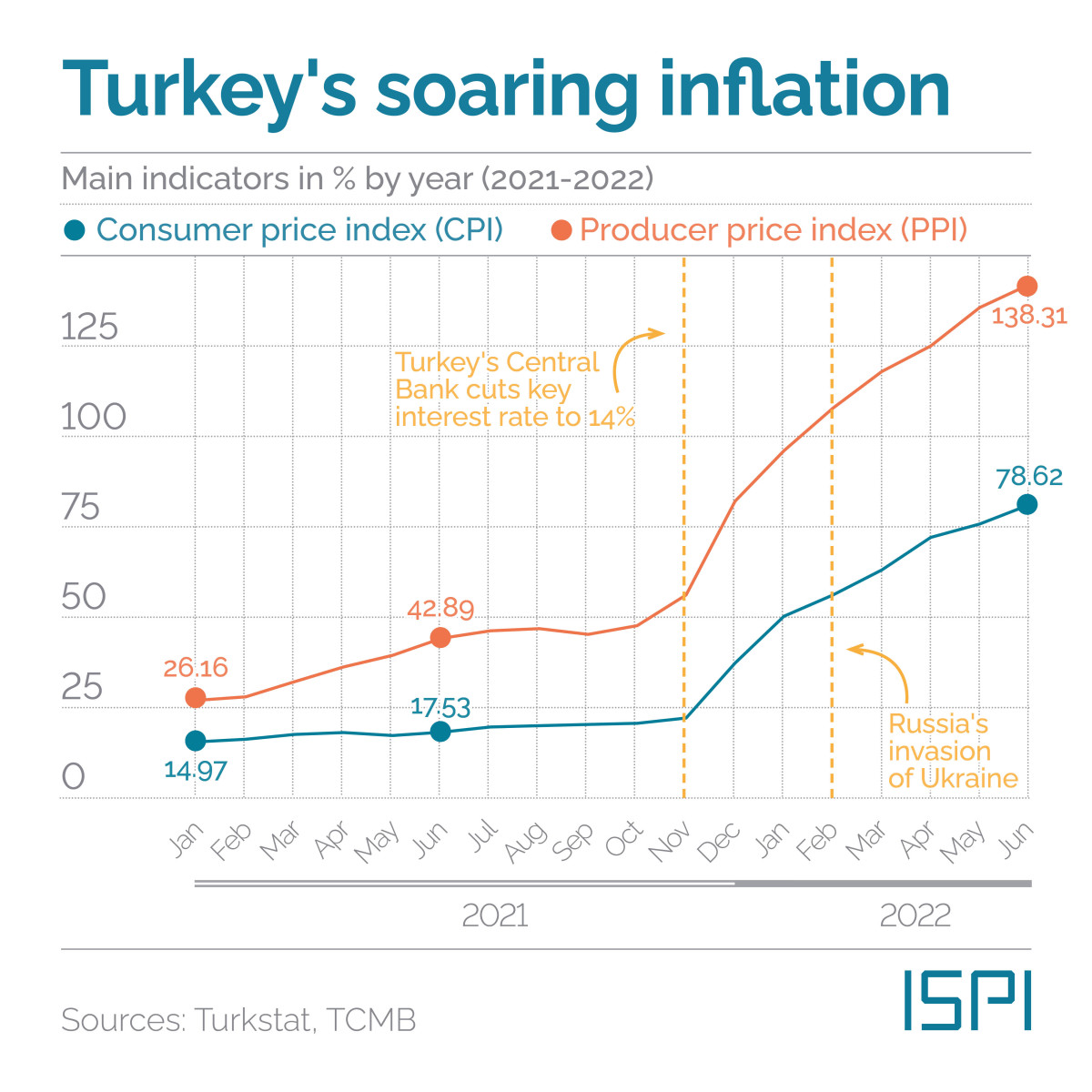 Experts from the ISPI MED network react to the latest domestic and international developments regarding Turkey.

“Turkey’s official annual rate of inflation is reported to have reached 78.6% in June 2022, whereas the independent Inflation Research Group (ENAG) has measured the rate of inflation to be as high as 175.55%. Although the Turkish government has often used Russia’s invasion of Ukraine (which has driven a dramatic rise in global food and energy prices) as a pretext to explain the current economic turmoil within the country, President Erdogan’s unconventional economic wisdom is much to blame. Erdogan’s insistence upon cutting interest rates, derived from his unorthodox belief that lower interest rates would in fact reduce inflation while boosting export and employment, has only yielded a depreciation of the lira against the dollar. To no avail, the government has welcomed a weak lira as a way to increase the country’s export competitiveness. Turkey continues to suffer from current account deficit problems as production processes ultimately require the import of goods and commodities.”

With elections around the corner, rationalizing the economy would be irrational

“According to the latest survey by PANAROMATR, a prestigious Ankara-based research centre, 74% of Turks believe that the country is going in the wrong direction, with only 17% thinking it is going in the right direction. 80% of participants felt that the economy is suffering, with only 13% believing it is going well. Most importantly, over half the respondents attribute Turkey’s financial problems to governmental responsibilities. The Turkish economic status, however, should not lead to rushed conclusions of losing government. The possibility that the governing coalition will win is almost ceased. At the same time, the prospect of loss for the opposition still exists. For the government, radical economic rationalization is the only option to put the economy back on the right track. Moreover, a perfect economic storm is approaching in the fall. But rationalization would be irrational due to political and social costs in the short term. Election campaigns will begin in less than eight months. The political and economic calendar will squeeze most of the remaining policy options, and Turkey will more likely head towards elections with the current political and economic approach.”

In the tripartite memorandum, Kurd’s extradition is the Gordian knot

“Sweden and especially Finland feel they can fulfil their commitments in the memorandum with Turkey without significant policy changes. Indeed, Finnish leaders have said that Finnish legislation already mostly covers Turkey’s demands, and in the memorandum Finland and Sweden also agreed to resume their arms exports to Turkey. The sticking point is instead Turkey’s demand for the extradition of Kurdish militants. In the memorandum, both Sweden and Finland promised to ‘address Türkiye’s pending deportation or extradition requests of terror suspects expeditiously and thoroughly’. President Erdogan has since declared that Turkey expects Sweden – which is home to far more Kurds than Finland – to extradite 73 Kurdish militants. This is a very specific target Sweden has to reach in order for Turkey to ratify its succession to NATO. To be sure, there will be room for negotiation on the details, but without major Swedish action on the extradition, it is unlikely that Turkey will ratify the two countries’ accession. Given that Turkey will be holding general elections in June 2023 and the Turkish economy is in poor shape, Erdogan is likely to seize on these extraditions – and other tangible issues – to gain popularity with the electorate. It’s important to remember that the Turkish government and the Turkish public alike consider Kurdish militancy a national security threat.”

The Biden-Erdogan meeting: the last tango in Madrid?

“The Biden-Erdogan meeting in Madrid has marked a significant, but not new, development in their bilateral relations. Since the beginning of the Ukraine war, Turkey (or Türkiye) has been neglected as a significant player by the US and the EU (although it has the second largest army in NATO). On the one hand, as we look at the matter from this perspective, it makes perfect sense for the presidents of two important NATO states to meet upon the sidelines of the summit. On the other hand, by conditioning Sweden’s and Finland’s accession to the Atlantic Alliance, Turkey may have been perceived as a troublemaker during a time NATO was required to be seen as being strong and united, but this was not the case. This act should have been read as Turkey’s call to its allies to recognise its security issues as a NATO member and not to take relations with Ankara for granted. Separately, there are still pending bilateral issues that need to be resolved between Turkey and the US, with the F16 modernisation and sale to Ankara as the next important step. This would also be in the US national interest. Senator Graham’s visit to Turkey over the weekend has also indicated positive momentum in relations despite their differences. This is an opportunity that needs to be grasped by both sides. This should not be linked to domestic politics in Turkey because the US-Turkey relationship is a far broader matter with a longer-term perspective.”

Draghi in Ankara: when “pragmatism prevails in Mediterranean affairs”

“The Italian Prime Minister Mario Draghi’s visit to Ankara at the beginning of July marks a significant shift after the last year rift in bilateral relations. In the context of the war in Ukraine, Turkey’s efforts to mediate between Moscow and Kyiv and unlock grain supplies have received international praise and support. Nevertheless, Draghi’s meeting with President Recep Tayyip Erdogan sends an additional message: Turkey is an essential partner for Rome in the most crucial issues affecting the broader Mediterranean region. From Libya’s stabilization to the quest for alternative gas supplies to Europe, as well as to the management of migration flows through the eastern corridor, cooperation with Turkey proves to be quite well necessary. Once again, pragmatism prevails in Mediterranean affairs.”