Tunisia’s democracy: Not a storm in a teacup

most significant issues and trends. Today, we turn the spotlight on Tunisia, where the ongoing political crisis has intensified after President Kais Saied dissolved the Parliament, which had been frozen since July. This move has further plunged the country into political turmoil and stoked fears of a nascent autocracy. In his latest effort to consolidate power, Tunisia’s President

most significant issues and trends. Today, we turn the spotlight on Tunisia, where the ongoing political crisis has intensified after President Kais Saied dissolved the Parliament, which had been frozen since July. This move has further plunged the country into political turmoil and stoked fears of a nascent autocracy.

In his latest effort to consolidate power, Tunisia’s President Kais Saied formally dissolved the Parliament on March 30th. This controversial move, in his own words meant to “preserve the state and its institutions”, came at a time of increasing political tensions in the country. Since last July, Saied has adopted a range of exceptional measures that include freezing the chamber, changing the prime minister, rejecting the 2014 Constitution and dismissing the Supreme Judicial Council. From that moment on, the Parliament’s activities have remained frozen, with formal decisions resting in the President’s hands. The crisis peaked in late March this year when lawmakers held an online meeting and voted to repeal the emergency powers Saied has granted himself thus far, to which he retaliated by dissolving the national assembly. The Parliament’s vote and subsequent dissolution are not going to rain on Saied’s parade, however, as the Tunisian President will stick to the roadmap he unveiled in December. Based on the results of an online national consultation that has just been finalised, he will put a newly drafted constitution to a referendum in July, followed by the election of a new Parliament at the end of the year. Opposition to Saied, which already branded his power grab as a “coup d’état”, rebuffed his latest move as unconstitutional. Though parliamentary antagonism towards the President is growing, Saied seems to retain a solid social base, as shown by the wide popular consensus regarding his steps towards a presidential system. Hence, the Parliament’s vote and ensuing dissolution have further polarised Saied’s opponents from the public, protracting the political deadlock that has plagued the country for several months. The ongoing instability is indeed likely to escalate, particularly as it intersects with a deep financial crisis and several socio-economic challenges — both aggravated by high commodity prices driven by the war in Ukraine. At the international level, recent developments in Tunisia have raised some red flags in both the United States and Europe, traditionally committed to the country’s institutional and economic stability. All these elements combined might eventually prove highly challenging for Saied, as the success of his plan to cement his one-man rule hinges upon the support from a large section of the population. 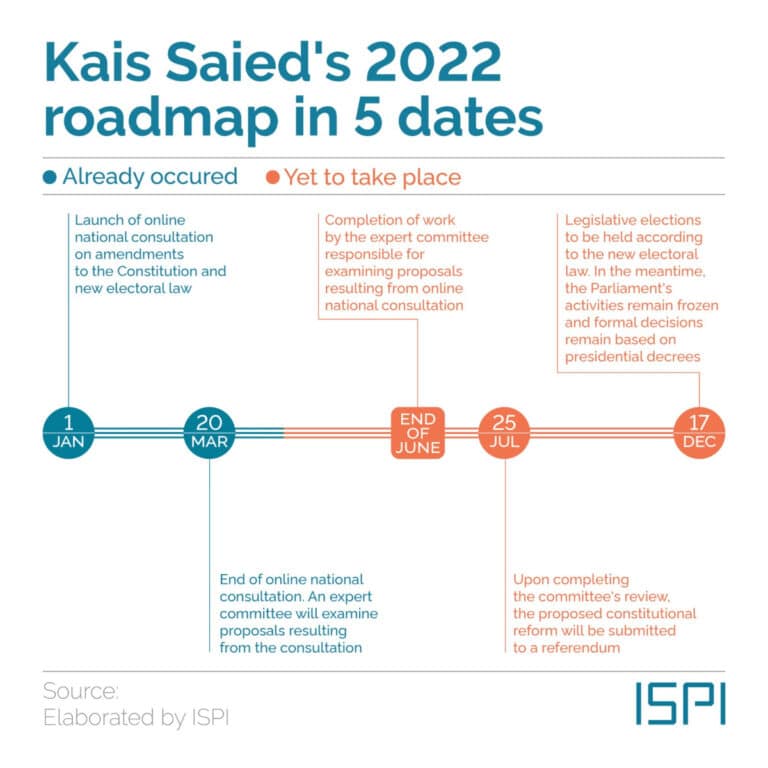 Experts from the ISPI MED network react to President Saied’s decision to unilaterally dissolve Parliament and the resulting fears of a budding autocracy in Tunisia.

An all-powerful President without checks and balances

“Tunisia’s President remains more popular than his opponents, hence the absence of any notable public reaction against the dissolution of the Parliament. Political parties are diminished and discredited in Tunisia and last year reinforced their evanescence, corroborating the President’s thesis that the opposition is insignificant and lacks any form of popular support. In the meantime, he has secured the quasi support of the powerful labour union (the UGTT), the employers’ organisation, and the bar association. He also retains the fidelity of the armed forces. So far, his plan is on track.

The President’s populist message, blaming the country’s woes on his opponents and foreign conspiracies, keeps him above the political confusion, making him increasingly intolerant of any form of criticism and ultimately consolidating his powers. Over time, he risks becoming a classic authoritarian ruler with negligible checks.”

The deep gap between the opposition and the public

“The suspended Parliament’s virtual meeting and online vote to repeal the exceptional measures introduced on July 25th, 2021, represents a direct challenge to the President’s recent power grab. At the constitutional level (if the 2014 Constitution can still be used as a frame of reference), this move has created two parallel authorities and cast doubt over the executive’s legitimacy. However, it has further eroded the legislative body’s legitimacy, credibility, and effectiveness at the political level. Although the meeting was closely followed by the political elite, it did not have any impact on public opinion, which rejected the return of the current Parliament in any shape or form, applauded its dissolution, and expressed eagerness for a shift towards a presidential system (as found in Sigma Conseil’s and Emerod’s monthly polls). Rather than ending the political deadlock, this move deepened the gap between the opposition and the public, who continue to support the President.

It is not improbable that tensions might thus escalate into violence, especially considering the dire economic situation and the pressure exerted — mainly by Washington — in support of the opposition while being oblivious of the local context and the Tunisian people’s hope for stability and democracy (in their own way and pace).”

“Between a rock and a hard place”

“Tunisia faces a grave financial crisis. Before the war in Ukraine, the country had to borrow around $7 billion in 2022, including $4.2 billion from international markets. The growth in food and energy prices increased the needs by $2billion. The problem is that securing budget funding depends on reaching an agreement with the International Monetary Fund (IMF), which is far from being guaranteed. Seven months after his power grab, President Saied is currently caught between a rock and a hard place. On the one hand, Tunisia’s financial crisis deprives him of the necessary resources to maintain his support base. On the other hand, an agreement with the IMF will require austerity measures, including wage freezes and higher food and energy prices. This is a challenging scenario, considering that the success of his plan to change the Constitution relies on the support of a large population segment that is supposed to vote on the July 25th referendum.”

“President Saied’s decision to dissolve the Parliament risks worsening Tunisia’s already difficult political and socio-economic situation. The country is already dealing with the most severe economic crisis in recent years, aggravated by the rise in food and energy prices. Even more dramatically, the Ukraine war threatens Tunisia’s wheat supply as approximately half of it is imported from Russia and Ukraine. Amid negotiations with the International Monetary Fund over an economic aid package, Saied’s latest move represents a hazard the country cannot afford. This authoritarian drift could alienate his popular support base and, above all, assistance from the West, already ruffled by Tunisia’s moderate diplomatic response to the Russian invasion. The crisis in Ukraine could be the straw that breaks the extremely fragile Tunisian camel’s back while dark clouds loom on the horizon.”

Europe keeps an eye open on its southern shore

“Tunisia’s President has promised to draft a new constitution and put it to a referendum this year, followed by the election of a new Parliament. By addressing the Tunisian people at the beginning of the Islamic holy month of Ramadan, he confirmed his determination. Nevertheless, the authoritarian measures taken by President Saied since last summer (namely ruling by decree, jailing opponents, suspending parts of the Constitution, dismissing the Supreme Judicial Council, dissolving the Parliament, and now opening legal proceedings for conspiring against state security) have raised serious concerns and prompted some scepticism internationally.

Across Europe and neighbouring countries, the determination to support Tunisia on the road to overcome its difficulties in all possible ways and means continues to prevail. This is primarily caused by Libya’s challenging situation vis-à-vis Mediterranean stability and by Europe’s traditional role in promoting coexistence among North African countries and contributing to social and political security across the Sahel region. Lastly, the commitment to assist Tunisia is also due to the already high degree of multilevel South-North interrelation.”