The Unbearable Cost of Inflation in the MENA Region

The MED This Week newsletter provides expert analysis and informed insights on the most significant developments in the MENA region, bringing together unique opinions on the topic and reliable foresight on future scenarios. Today, we turn the spotlight on the rising inflation rates that many countries in the region are currently experiencing.   For several months

The MED This Week newsletter provides expert analysis and informed insights on the most significant developments in the MENA region, bringing together unique opinions on the topic and reliable foresight on future scenarios. Today, we turn the spotlight on the rising inflation rates that many countries in the region are currently experiencing.

For several months now, many countries of the MENA region have experienced generation-high inflation rates. The shock upon global energy and food markets, triggered by the Ukraine conflict, has compounded the difficult economic conditions that many states in the region were already experiencing, contributing to a new inflationary spiral. In Tunisia, inflation has caused a surge in food and energy prices, further unsettling a delicate economic and political phase. The situation is similarly critical in Iran, where rates have recently reached an almost historical high not seen since 1995. Inflation is also skyrocketing in Lebanon, whose population was already enduring a three-years long economic and financial crisis. Finally, in Turkey, President Erdoğan’s unconventional economic policies have been unable to reduce inflation and bolster a weakening Turkish Lira. Increasing inflation rates are negatively impacting the post-pandemic economic recovery of many countries. In the present scenario, it is difficult to understand how long this spiral could last; however, it is already clear that the current economic conjuncture will have profound consequences at the social level. 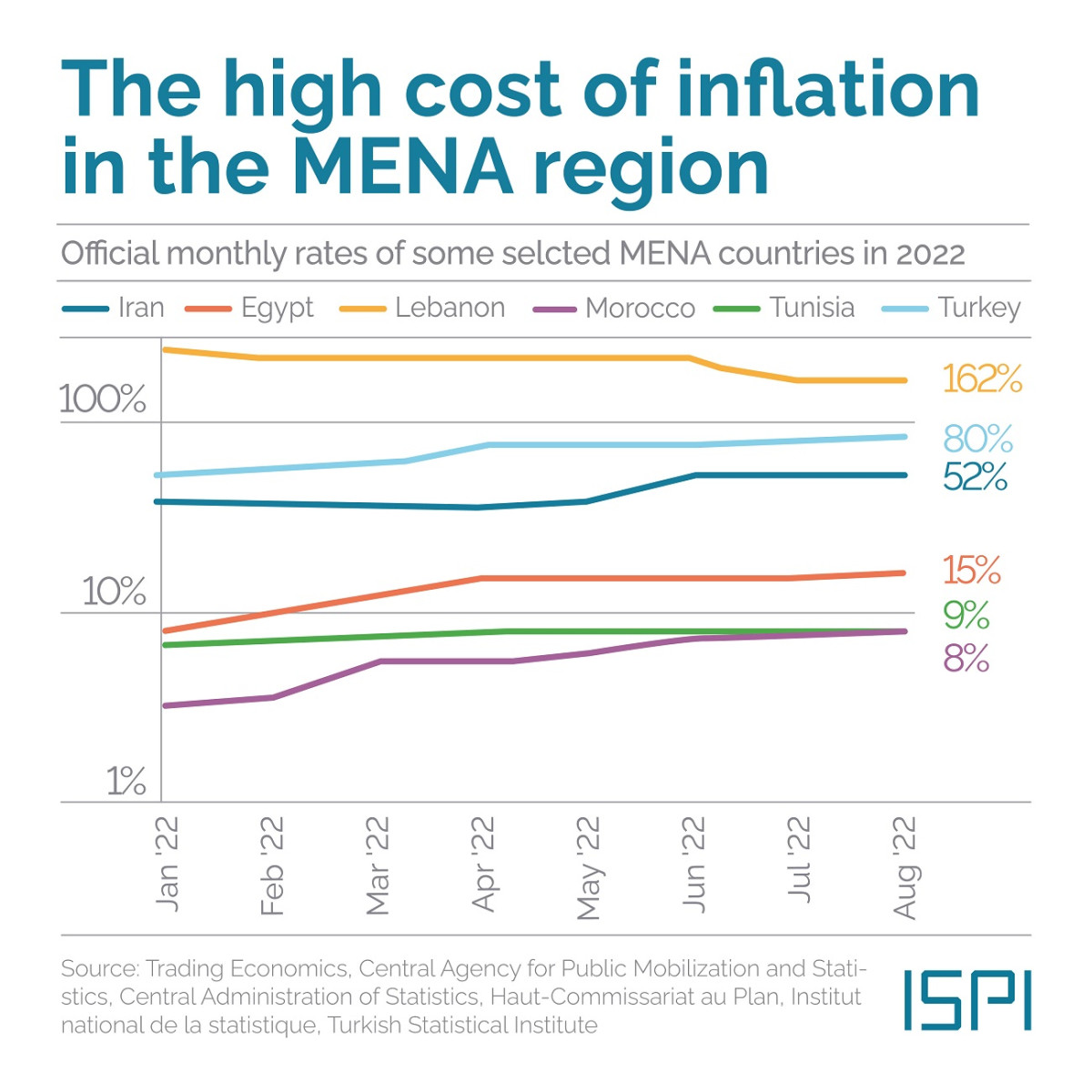 The experts of the ISPI MED network react to the consequences of high inflation rates in the MENA region.

“Currently, the MENA inflation rates are at record levels. Since most of the countries within the region rely heavily upon imported goods and services, rising prices are negatively impacting consumers and also significantly deteriorating trade and fiscal balances, in a moment when their governments are attempting to soften the blow using subsidies. Moreover, MENA central banks must implement tighter monetary policies that hamper the region’s post-pandemic recovery. However, MENA’s diverging realities result in varied effects of inflation. For countries reliant upon oil and gas exports, rising energy prices (which make a significant component of global inflation) have a positive effect on trade balances, allowing for stronger recoveries. Alternately, MENA energy importers are negatively impacted. At this moment, these countries are experiencing a dramatic rise in their external debt and must therefore increase interest rates more rapidly. The result is deteriorated growth prospects and in some cases recession. In the meantime, if the Fed and ECB’s fight against inflation causes a global recession, then all post-pandemic growth within MENA countries will come to a grinding halt. Things change very quickly in the energy markets.”

“The Iranian economy has been in a prolonged mode of stagflation since 2018, when the US exited the Joint Comprehensive Plan of Action (JCPOA) and began the so-called maximum pressure sanctions. However, the biggest inflationary shock has been experienced in the aftermath of the government’s decision to discontinue the subsidized exchange rate of 42,000 rial to the US dollar (contrasting with 270,000 rial – the rate for imports and exports). The lower rate was the basis for importing food and medicine, as a result of which a massive inflationary impact was felt in the category “food, drinks and tobacco”. The latest official inflation figures belong to the 12-month period ending 22 August, with all rates showing a declining trend. During this period, annual inflation stood at 41.5%. In comparison, on 22 July, annual inflation was 54% – the highest figure since the historic high of 59% in June 1995. The 1.4% monthly inflation is the lowest monthly rate in the current Iranian year.  This means that the inflationary shock caused by the subsidy reforms has been absorbed and it is expected that this decreasing trend will continue. The main inter-related causes for high inflation have been enormous budget deficits and a devaluation of the national currency.  In order to contain high inflation, the government has to manage its finances to reduce budget deficits to a minimum. This could primarily be achieved through a restoration of the JCPOA, so that Iran can access its internationally stranded funds (estimated at around $100 billion) and also increase its petroleum export revenues. In the absence of sanctions being lifted, the government will try to increase its tax revenues which would be counter-productive as this would place further pressure on businesses.”

“Lebanon has been facing multi-pronged crises which have deepened and expanded dramatically due to bad government policies. As a result, inflation has been skyrocketing for the past couple of years. The annual inflation rate for 2021 came in at 154.8% and is expected by Fitch Solutions to accelerate to 178% for the year 2022, placing Lebanon second highest among all countries in the index. This latest increase in the projected inflation rate can be ascribed to adjustments of “telecommunication, port and customs tariffs” by the government. Both businesses and households have suffered tremendously from the uncontrolled inflation. Given the rapidly deteriorating socio-economic situation, the government is urged to prioritize policies aimed at curbing inflation, such as temporarily eliminating customs tariffs on all non-luxury products rather than increasing them. All in all, embarking on an IMF program immediately remains the only way possible to save the country from a total irreversible collapse.”

Inflation is hitting Tunisia in a very delicate phase

“At the end of August, the inflation rate in Tunisia was 8.6%, a rate not seen in the country since the beginning of the 1990s. Major increases were recorded in the prices of food and beverages, furniture and household services. This loss in the purchasing power of citizens intervenes in a highly deteriorated economic context, exacerbated by the repercussions of the war in Ukraine. Surging prices of food and energy have led the total trade deficit to widen by 57% in the first half of the year, with the value of imports increasing by more than 31%. Shortages of basic goods such as water, sugar, and flour have been recorded in recent months. In May, the Central Bank increased the interest rate by 75 points to 7%, a measure that has failed to contain inflation. As discontent grows, in a move to ease social tension in an extremely delicate political phase – legislative elections will be held in December, the government has recently agreed with the UGTT, a major labour union, on a wage hike for public sector workers. The agreement would facilitate the reaching of a deal with the International Monetary Fund. Indeed, a $2-$4 billion loan is seen to be crucial to save the country’s public finances.”

In Turkey, unconventional economic wisdom is much to blame for the current situation

“Turkey’s official annual rate of inflation is reported to have reached 80.21% in August 2022, whereas the independent Inflation Research Group (ENAG) has measured the rate of inflation to be as high as 181.37%. Although the Turkish government has often used Russia’s invasion of Ukraine (which has driven a dramatic rise in global food and energy prices) as a pretext to explain the current economic turmoil within the country, President Erdoğan’s unconventional economic wisdom is much to blame. Erdoğan’s insistence upon cutting interest rates, derived from his unorthodox belief that lower interest rates would in fact reduce inflation whilst boosting export and employment, has only yielded a depreciation of the lira against the dollar. To no avail, the government has welcomed a weak lira as a way to increase the country’s export competitiveness. Turkey continues to suffer from current account deficit problems as production processes ultimately require the import of goods and commodities.”