The Truce Is Over: Yemen’s Leap Into the Void?

The MED This Week newsletter provides expert analysis and informed insights upon the most significant developments within the MENA region, bringing together unique opinions on the topic and reliable foresight on possible future scenarios. Today, we turn the spotlight on Yemen, where the expiry of a six-month ceasefire threatens to rekindle the war and aggravate the condition

The MED This Week newsletter provides expert analysis and informed insights upon the most significant developments within the MENA region, bringing together unique opinions on the topic and reliable foresight on possible future scenarios. Today, we turn the spotlight on Yemen, where the expiry of a six-month ceasefire threatens to rekindle the war and aggravate the condition of millions of people.

On October the 2nd, after previously being renewed twice, the UN-brokered truce agreed upon in April expired without any further agreements being reached to yet another extension. This development risks thrusting Yemen back into war after the most prolonged lull in fighting since the start of the war in 2015. The cease-fire, strongly advocated by the UN Special Representative in Yemen, Hans Grundberg, had initially enabled the partial opening of the Houthi-controlled Sanaa airport and also the Red Sea port of Hudeyda, and attempted to lift the Houthi blockade upon Taiz, the country’s third largest city. Although little progress has been made on some fronts and despite allegations of violations of the agreement by both sides, the truce had brought a sharp decline in fighting within the country, and thus had drastically reduced victims and displaced persons. However, without an extension of the cease-fire, it will no longer be possible to fully exploit the progress achieved to date. While negotiations remain ongoing, both parties place blame upon each other for letting the deal expire. The Yemeni government points the finger at the Houthis, who also rejected Grundberg’s latest proposal to extend the cease-fire for six months. On its side, Ansar Allah considers many of its requests as being unaddressed, starting with the unconditional reopening of the Sana’a airport and the complete lifting of the blockade upon Hudeyda. Another cause of disagreement was the group’s demand for payments to public officials in areas under their control – a request that had so far run aground due to the difficulties in finding an adequate mechanism for such payments. Whilst the window for renewing the truce narrows, cracks within the anti-Houthi coalition have emerged in the southern provinces. In Shabwa and Abyan, secessionist forces linked to the Southern Transitional Council (STC) have indeed wrestled strategic positions from Yemeni regular army units, progressively showcasing the weaknesses of the “anti-Houthi” camp. Overall, the renewed spectrum of a return to clashes within Yemen is inevitably raising concerns in neighbouring countries such as Oman and Saudi Arabia, both of which to date have promoted and supported the national truce. 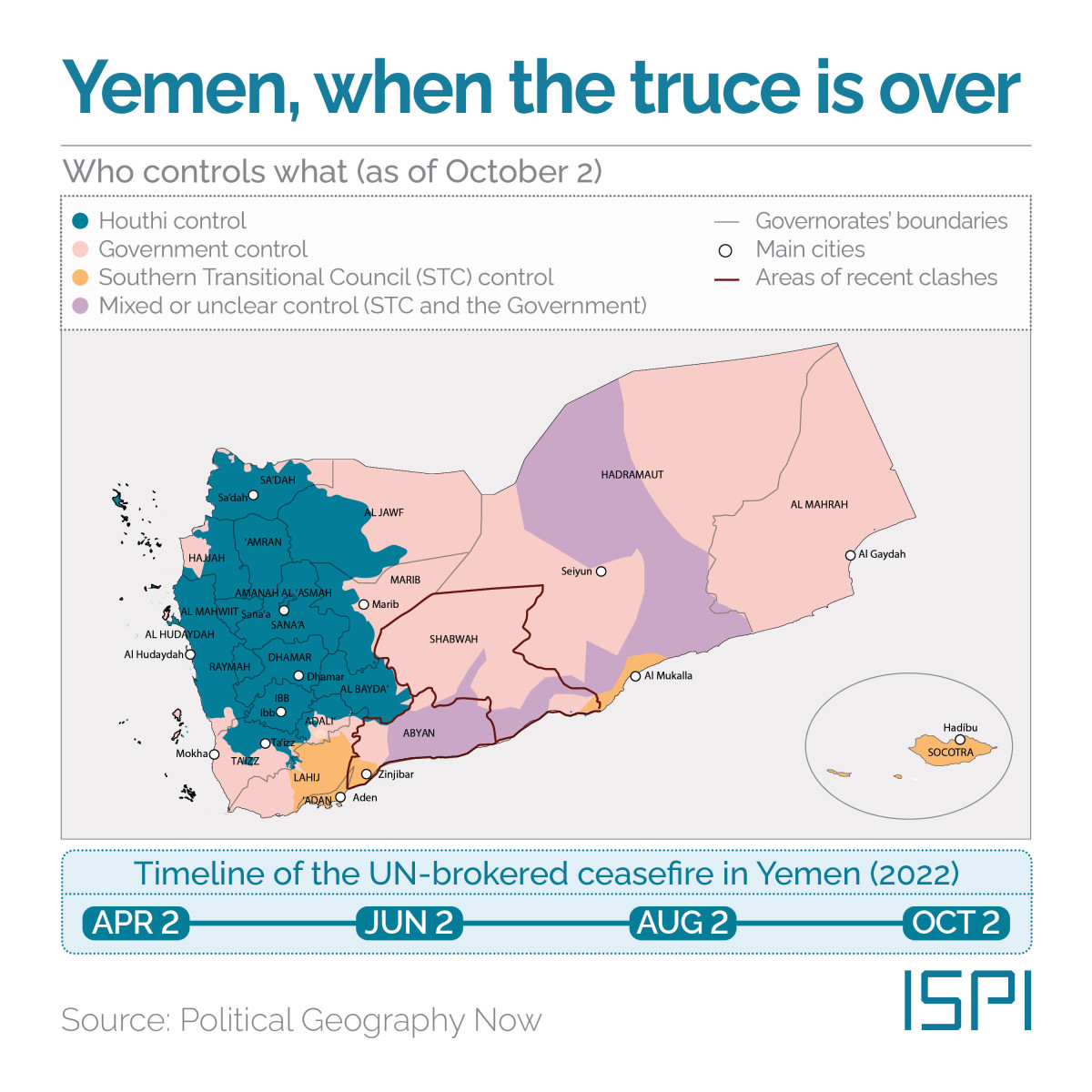 Experts from the ISPI MED network analyse the consequences of ending the UN-backed truce in Yemen.

In the absence of a deal, the importance is placed upon keeping all channels open

“Whilst intense international and regional diplomatic efforts continue, the lack of a renewal to the ceasefire represents a significant setback to peace efforts in Yemen, let alone the establishment of a permanent ceasefire. In the absence of such a deal, the importance is placed upon keeping all channels open and the parties involved talking – even if containing escalation may be all that can be achieved at this point.

In some regards, the conflict continues to have a life of its own that defies the efforts of international peacemakers; the potential collapse of the truce ultimately underlines the limits of even such united strategic diplomacy. Moving forward will mean understanding the often-intersecting set of self-interests governing different parties – in addition to accepting the constraints of what can be done in an increasingly intractable conflict.”

All the cracks in the anti-Houthi front

“Although the clashes between some governmental forces and the secessionists in Shabwa and Abyan have no direct link with the truce – as they took place within the anti-Houthis camp, they played a significant role in weakening the newly-formed Presidential Leadership Council’s (PLC) position. This created a power imbalance within Yemen’s political and military landscape. On the one hand, it encouraged the Houthis to see themselves as the most powerful party in Yemen. On the other, it revealed that any attempts to unify their adversaries on one front had failed.

In this context, the UAE and Saudi Arabia’s differing agendas – reflected in relations of their local allies on the ground – have continually been a significant issue in the past seven years of war, creating a new layer of conflict within the anti-Houthis front. This division still represents the Saudi-led coalition’s central dilemma, which will most likely continue as long as there is no clear vision amongst the coalition partners.”

“The Houthis’ strategic objective is to broker a deal with Saudi Arabia that allows them complete control, excluding other Yemeni parties, of North Yemeni territories or the parts under their control. In pursuit of this objective, they will do what is necessary to nudge the Saudis back into direct negotiations. They will probably keep issuing threats targeting Saudi Arabian tourism and oil installations. If that doesn’t work, they will launch their missile and drone attacks on Saudi Arabia when it will hurt most – presumably, in the first half of November, as the expected spike in tourism triggered by the World Cup approaches. Saudi Arabia has mounted a campaign to attract international tourists who will travel to nearby Doha for the games that start on November the 20th. That is the time when Saudi Arabia will be at its most vulnerable.”

“The missed opportunity to extend the truce in Yemen will have dire humanitarian consequences. Over the past six months, civilian suffering has been reduced, and steps have been taken to solve the country’s fuel crisis while opening areas previously under siege. A return to a conflict will likely undo these small but significant gains. Whilst the truce has provided respite, Yemen still faces inter-related strife and economic crises, utterly exacerbated by climate change and the consequences of the war in Ukraine. A return to conflict would likely result in renewed airstrikes, civilian casualties, internal displacement, and further restrictions upon the distribution of much-needed humanitarian assistance. Without the truce, fuel imports into the North of Yemen will likely be halted, contributing to a rise in food and other commodity prices critical to arresting Yemen’s food security crisis. Parties to the truce are exhorted to return to negotiations as a matter of urgency.”

The truce’s expiration is an “unwelcomed development” for Muscat

“Oman has been playing a mediating role between the warring parties in Yemen, including providing a neutral venue to host several rounds of negotiations. The Sultanate has also played a constructive function in the negotiations of the UN-led truce between the Houthis and the Saudi-led coalition. The failure to renew the ceasefire is an unwelcome development for war-devastated Yemen, regional peace, and also Oman as a neighbouring country that has been affected by the war and its humanitarian impacts upon the Yemeni people. The end of the truce could further escalate the conflict, leading to more instability within Yemen and the wider region. Oman has kept an equal distance between the warring parties and will continue to play its mediating role whilst working closely with the UN and other international powers to resolve the conflict through dialogue and negotiation.”

Riyadh’s problems in Yemen: No end in sight

“The failed extension of the national truce in Yemen would have three negative implications for Saudi Arabia, related to national security, strategy and politics. On national security, the Houthis have already threatened to resume missile and drone attacks against Saudi and Emirati oil fields and infrastructure, comprised of targets in the Red Sea. This would further increase the international oil price – not so bad for Riyadh – but to the detriment of Saudi border security. At a strategic level, the Houthis would likely renew the military offensive against the Marib governorate and its energy fields, or possibly even against Hodeida city, openly violating the Stockholm agreement. Finally, there’s a strictly political issue. The collapse of the national truce would greatly weaken the already divided and fragile Presidential Leadership Council, a Saudi-backed initiative established to re-energise the anti-Houthi front”.