The Scramble for Libya

The MED This Week newsletter provides expert analysis and informed comments on the MENA region’s most significant issues and trends. Today, we turn the spotlight on the recent clashes in Tripoli and the attempt by parliament-backed Prime Minister Bashagha to install himself and his cabinet in Libya’s capital. On May 17, Libya was on the verge

The MED This Week newsletter provides expert analysis and informed comments on the MENA region’s most significant issues and trends. Today, we turn the spotlight on the recent clashes in Tripoli and the attempt by parliament-backed Prime Minister Bashagha to install himself and his cabinet in Libya’s capital.

On May 17, Libya was on the verge of a new spate of violence. The parliament-appointed Prime Minister, Fathi Bashagha, once again attempted to seize power and oust Abdul Hamid Dbeibah’s rival administration in Tripoli. Clashes struck the country’s capital at dawn, as Bashagha entered the city secretly backed by a network of armed groups. Upon realizing the lack of support and scale of opposition by militias loyal to Dbeibah, he was eventually forced to retreat. These events deepen the legitimacy crisis of the actors involved in the Libyan conflict, casting a shadow over the country’s prospects for stability. On one side — despite the endorsement of Haftar and the House of Representatives (HoR)’s speaker, Aguila Saleh — Bashagha’s failed blitz in Tripoli has jeopardized his reputation both in the country’s West and East. His feeble political standing is likely to play into his rivals’ hands in the short term. On the other side, Dbeibah’s shrinking clout and support base could hamper his efforts to capitalize on Bashagha’s recent debacle, eroding his popularity and military posture. In this already tight context, oil risks returning to the forefront of conflict and being exploited as “political blackmail”, especially considering the partial blockade on major Libyan oil facilities over the past few weeks. With the current boom in oil and gas prices, such closures have dealt a severe blow to the country’s economy, which is also struggling with the rise in food prices linked to the war in Ukraine. Against this backdrop, diplomatic efforts to resolve the country’s political deadlock and pave the way for a new constitutional framework and roadmap for elections have been slow-paced and may not yield positive results. In fact, Bashagha’s scramble for power took place amidst UN-sponsored talks in Cairo between representatives of the Eastern-based HoR and the Tripoli-based High Council of State (HCS), which, however, seem to bear meagre hopes. 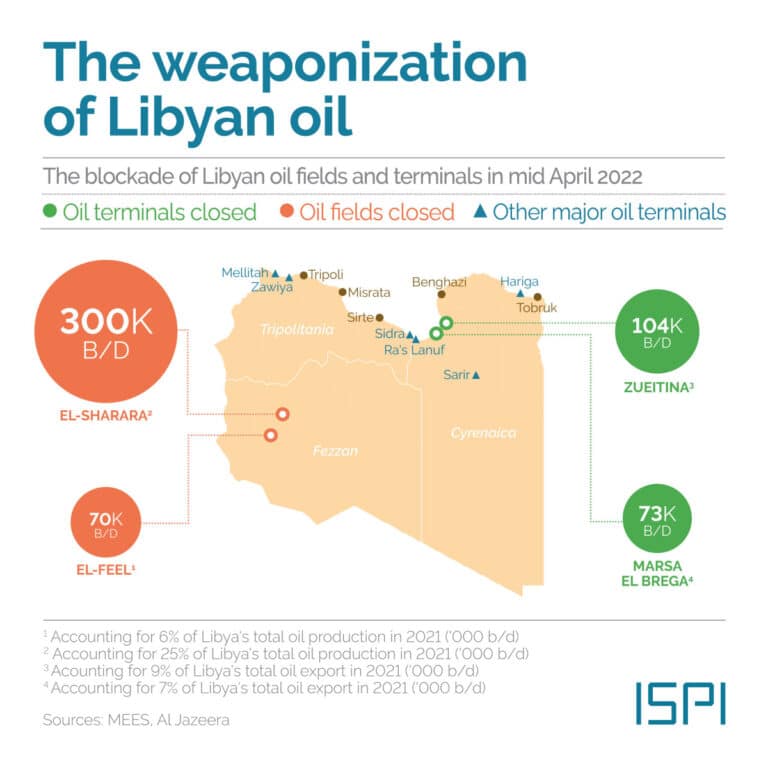 “There are many parallels between Bashaga’s attempt to enter Tripoli and General Khalifa Haftar’s botched blitzkrieg to capture the capital on the 4th of April 2019. Ironically, both attempts at a fait accompli failed for similar reasons: a vast underestimation of the backlash these actions would trigger. Also, there is a dark undertow of tragedy to Bashagha’s attempt when realizing he was smuggled into Tripoli by a network of armed groups he had once vowed to dismantle. This speaks to a broader trend of opportunism characterizing most of today’s alliances in Libya, but also to Bashagha’s feeble political standing and fading support. In failing to justify his fickleness in allying with Khalifa Haftar and Aguila Saleh, Bashagha has been put in a position where his long-term political relevance is contingent on either entering Tripoli or provoking a conflict. Having recurrently failed to do the former, it may well be that he now perceives his only option to be attempting the latter.”

Dbeibah Has Emerged Stronger, Yet Not Free from Constraints

“The latest clashes have ended Bashagha’s reputation as a powerful military commander and strongman in Western Libya. Conversely, Dbeibah has emerged stronger and more popular (at least for now) at the expense of his rival. General Haftar had bet that Bashagha’s connections and credentials in Misrata would overshadow his Faustian pact with the party responsible for waging war on Tripoli, thus obtaining both the city and the clan loyalties necessary to seize the Libyan capital for the second time in three years. In reality, Bashagha’s deal with Haftar has alienated his support base and it seems that the former has conceded the forces which fuelled his military strength and earned him political relevance.

Dbeibah can now grab the lion’s share of the constituencies Bashagha has conceded, though he will unlikely rely on them alone. The caretaker Prime Minister in Tripoli is probably willing to call for parliamentary elections before the presidential elections; however, given the current impasse he will come under international pressure from Haftar’s allies in Paris and Abu Dhabi to unify his Government of National Unity (GNU) with the Libyan Arab Armed Forces (LAAF) prior to the elections. Aimed at securing Haftar’s future, this move would diminish Dbeibah’s popularity and erode his military strength vis-à-vis the most powerful forces positioned in strategic proximity to Tripoli for another power grab.”

Bashaga Risks Being the Sacrificial Victim of Saleh’s Plots

“Despite Bashagha’s influence in the capital, gained during his tenure as Government of National Accord’s Interior Minister, Aguila Saleh’s idea of appointing him as the new Prime Minister without first agreeing with Dbeibah before imposing him in Tripoli was not successful. The events of the past few weeks, when the new cabinet tried to take office in the capital and militias loyal to Dbeibah reacted violently, unmistakably illustrate his strategic error. At such a delicate time of transition, a dual government could throw the country into chaos. In a nation where the law of the strongest still counts, Bashagha risks being delegitimized not only in Tripolitania but also in Cyrenaica; ultimately proving to be the sacrificial victim of Saleh’s shady games.”

Behind the Scenes of the Oil Facilities’ Blockade

“The closure by General Khalifa Haftar’s coalition of some oil facilities since mid-April is attributable to the acute animosity of the Field Marshal’s camp vis-à-vis the pro-Dbeibah camp. The spark that ultimately set off Haftar’s blockade was an April 13th deal struck between the National Oil Corporation (NOC) Chairman, Mustafa Sanallah, and Prime Minister Dbeibah. In return for the $8 billion the NOC will transfer to the Central Bank of Libya, Dbeibah has guaranteed 37 billion dinars’ worth of budget for NOC’s expenditures over the next three years. The net result is an injection of hard currency, which will help Dbeibah hold onto power for another few months. Owing to the Ukraine war, the US wants the NOC to have a secure budget in order to increase its oil production capacity. At the same time, the Americans are in favor of the NOC keeping its dollar revenues in its own accounts. Furthermore, Washington supports the formation of a Financial Committee responsible for making sure that Libya’s oil revenues are evenly distributed. In theory, this idea sounds laudable, but its actual implementation is unlikely to go smoothly. Against this backdrop, Libyan citizens do not even know whether, amid the current in-fighting, their elites are properly navigating the international food crisis.”

Despite Their Recent Rapprochement, Ankara and Cairo Still Lack a Modus Vivendi in Libya

“The de-escalation in the Libyan conflict is an outcome of the major external actors’ avoiding escalation rather than the result of a compromise or resolution. In line with this, Turkey and the UAE appear to refrain from reactivating their hostilities. The recent thaw in their relations has borne out results for Libya. However, Ankara and Cairo are far from finding a modus vivendi in Libya. Egypt’s demand for the abrogation of the Turkish-Libyan security cooperation deal and withdrawal of Turkish forces from Libyan territory represents a maximalist position, which is unlikely to be satisfied. In fact, Ankara is more likely to see Egyptian and/or Russian interests behind Bashagha’s recent steps — which triggered limited clashes in Tripoli — than the UAE. In any case, Libya is set to have a major impact on the normalization of Turkish-Egyptian diplomacy. Ultimately, without a modus vivendi in Libya, the prospect for a reset in Turkish-Egyptian ties is limited. This conflict serves both as an impediment against and impetus for a Turkish-Egyptian rapprochement.”

The Oil Factor Between Internal Production Cuts and the “Ukraine Effect”

“As Libya witnesses the ultimate wave of chaos, oil may be returning to the forefront of the conflict as a ‘weapon’ misused by competing factions. This has happened before, but the current context is different. While recent production cuts have raised shortage concerns, raising prices have disrupted an already troubled market. Over the past few months, oil prices skyrocketed due to Putin’s war in Ukraine; OPEC and its partners refused to increase production to bring them down; and global markets have been in turmoil, especially as an EU ban on Russian energy begins to take shape. In this context, control of oil facilities, production, and exports may be used as a political pressure card by different Libyan actors, some of whom have contacts with global oil producers, including Russia. It is well known that, in a divided Libya, Russia is a leading backer of east-based forces. The closure of certain oil facilities and export terminals under unclear circumstances – some of which are partially controlled by Wagner mercenaries – is particularly worrisome.”