The end of Barkhane in Mali: What’s next for the Sahel?

The MED This Week newsletter provides expert analysis and informed insights on the most significant developments in the MENA region, bringing together unique opinions on the topic and reliable foresight on future scenarios. Today, we turn the spotlight on the French withdrawal from Mali, a pivotal moment for the future of the Sahel and North Africa

The MED This Week newsletter provides expert analysis and informed insights on the most significant developments in the MENA region, bringing together unique opinions on the topic and reliable foresight on future scenarios. Today, we turn the spotlight on the French withdrawal from Mali, a pivotal moment for the future of the Sahel and North Africa region.On February 17th, after nearly ten years of military involvement, France’s President, Emmanuel Macron, announced his decision to withdraw all French and European troops from Mali. These units are part of France’s Operation Barkhane, an anti-jihadist operation focused on the Sahel, as well as Takuba, a linked European special task force. As operational conditions became even more demanding for European troops in Mali, both groups will be relocating their activities to neighbouring Niger. For many observers, Macron’s announcement did not come as a surprise. It followed an agreement with France’s European and African partners and was the result of the deterioration of bilateral relations with Bamako, a process initiated well before the overthrow of Mali’s elected government by a military junta in 2020. Yet, the unfolding diplomatic crisis between Paris and Bamako has particularly worsened in recent months, culminating in the ban on the Takuba’s Danish contingent and the expulsion of the French Ambassador from Mali. France’s withdrawal from Mali points to a decline of French influence in one of the most strategic regions of the African continent, while casting a shadow over international efforts to stabilise the country. What had been designed as a temporary intervention to stabilise a regional order under threat in 2013, has gradually turned into a violent and prolonged conflict against jihadists affiliated with al-Qaeda and the Islamic State. Despite a decade of continuous French military presence, the war has spread from Mali to Niger as well as Burkina Faso. Meanwhile, regional armies seem no better prepared to counter the jihadist threat (Barkhane’s second goal), raising concerns about whether they can hold on their own. In addition, the sharp worsening of Malian and French relations, ultimately resulted in Bamako turning to Russia (entering an alleged agreement with the Wagner Group) to become its newest security provider. Overall, the French withdrawal will likely leave a security vacuum in the core of the Sahel region, creating additional challenges for Mali and neighbouring countries. A similar apprehension is shared by North African states like Algeria, where the consequences of an uncertain turn in the Sahel (in terms of security and migratory trends) could quickly reverberate beyond their southern borders. In itself, this represents a worrying scenario, not only for France and its Western allies but especially for the overall Saharan strip. 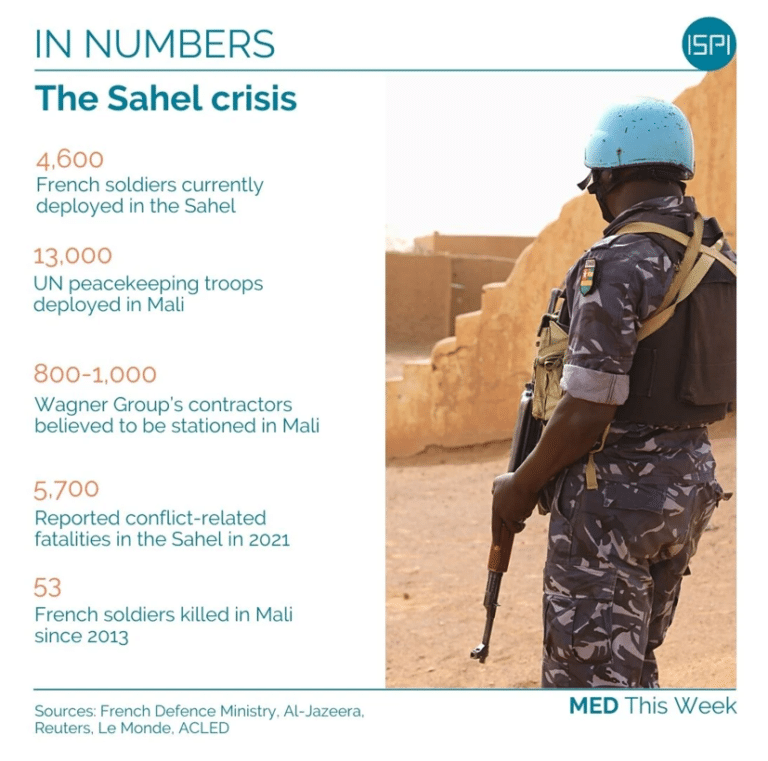 The experts of the ISPI MED network react to the French and European military withdrawal from Mali, which puts an end to an almost ten-year presence in a country crucial for the stability of the Sahel region.

Bamako must assess the costs of remaining on its own

“President Macron’s announcement of the withdrawal of Barkhane and Takuba military forces from Mali leaves the junta in Bamako in a critical position. Still subject to ECOWAS sanctions and African Union’s suspension – due to a democratic transition currently frozen until 2026 – the country is ever more isolated internationally and exposed to internal tensions over the management of the jihadi insurgencies. The need to reduce internal pressure could result in a change of strategy and the adoption of a negotiating approach with jihadist armed actors, which France has prevented so far.

The European states’ military intervention will rearrange itself diffusely in the region, with its fulcrum re-articulated in Niger. The growing concern about the spillover of jihadi activities towards the Gulf of Guinea could also push them to deploy military activities in the littoral states. At the same time, Mali’s breakup with traditional allies is set to create a worrying security vacuum for neighbouring countries and a window of opportunity for third actors to strengthen their influence in the area: the Wagner group’s presence in Timbuktu warns about Russia’s possible stronger engagement, while Turkey, the Gulf states and China could also be interested in deepening a strategic foothold.”

A first step towards the end of the “Françafrique”?

“The withdrawal of Barkhane from Mali is likely to result in France’s continued but less visible presence in the Sahel region at large. France has indicated that they will increase their military collaboration with other partner countries, such as Niger and the countries in the Gulf of Guinea, to continue the fight against jihadism, yet with fewer forces. In addition, there is a possibility that there will be an increase in more distant modes of fighting, such as the use of drones, to maintain limited visibility of French troops on the ground while maintaining pressure on the armed non-state groups. Given the recent deployment of Russian mercenaries to Mali, Western states are likely to want to mitigate the possible Russian influence in the region by maintaining a presence in the countries surrounding Mali.” 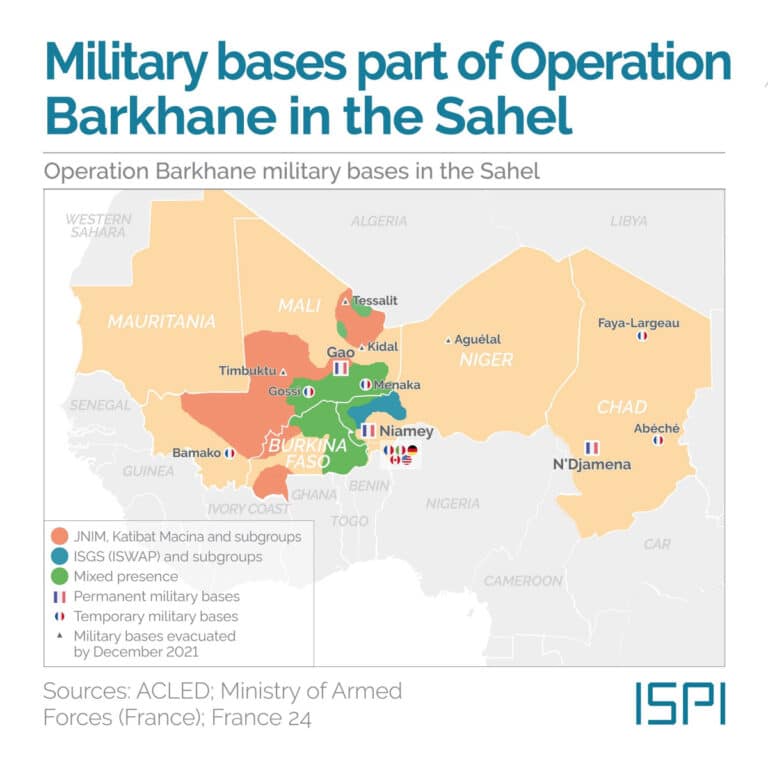 To go or not to go? (Dis)agreements in the European camp

“The French withdrawal has prompted solidarity from EU Member States as well as some notable splits. Even as most EU Training Mission (EUTM) and Takuba Task Force contributors signed on to the joint communiqué announcing the withdrawal, Spain was a notable absentee. Other partners disagreed with France’s approach and signalled an interest in continuing European missions in place, including the EUTM and the EU Capacity Assistance Program (EUCAP). However, continuing these programs with the reported presence of Russian mercenaries in the country raises the possibility of EU forces training personnel who will potentially fight alongside the Wagner Group, creating an uncomfortable situation for the Central African Republic (CAR) while also putting EU personnel at risk.”

As the Europeans leave, the Russians move in

“Even before France’s departure and despite protests from the United States, the Kremlin-linked Wagner Group established bases across Mali since December 2021 to support the Malian junta and fight jihadists. Its deployment is part and parcel of Moscow’s use of “private” security companies and disinformation campaigns throughout the Sahel and Africa to prop up problematic regimes in exchange for strategic access and resources. In a replay of Chechnya, Russia’s “stabilization” model and anti-Western maneuvers in Africa – executed through the Wagner Group – rest on supporting local regimes without regard for civilian casualties, human rights, accountability, and political pluralism. But the inglorious failure of the Wagner Group in Mozambique to weaken al-Shabab jihadists and its struggles to beef up the Libyan warlord Khalifa Haftar suggest that Wagner too will likely become mired in the complex mix of local ethnic grievances and global jihadism. Instead of enjoying counterterrorism success, will Wagner become involved in Mali’s gold and drug trafficking?”

Instability could spillover to North Africa

“The French withdrawal from Mali raises fears of a possible “security vacuum”, with potential repercussions on the whole North African region, both at a national and transnational scale. North African countries could also be affected by the possible changes to migration routes due to a potential deterioration of the security situation in Mali. Although at the moment it is hard to identify a clear impact of the French withdrawal on the flows of people and on networks of human smugglers (contrasting irregular migration was not among the objectives of Barkhane), further instability could result in a growing number of Malians moving to neighboring countries or northward. The Western Mediterranean and the Northwest African routes (crossing Morocco to reach Spain) are the ones most likely to witness an increase in departures.”

Algeria in search for a mediation role

“From Algeria’s perspective, France’s exit from Mali was inevitable, for France’s policy was doomed from the onset because it focused on a military solution. Algeria opposes foreign forces in Africa and supports African solutions. The Algerian government points out the consequences of Western intervention in Libya and elsewhere. Algeria, which shares a 1,300 km border with Mali, believes that the Algiers Accords it brokered in 2015 are the ultimate solution since they rest on a political solution comprising national reconciliation, socio-economic development, and decentralization. This will avert the fragmentation and the Afghanistization of Mali, which could become a jihadist haven, endangering Algeria’s national security. Algeria is unwilling to intervene militarily for fear of being bogged down or serving as a proxy for others; however, it wishes to play a mediation role.”