The MED This Week newsletter provides expert analysis and informed comments on the MENA region’s most significant issues and trends. Today, we sharpen the focus upon recent developments unfolding within the Eastern Mediterranean region marked by, among others, an historic maritime border deal struck by Israel and Lebanon. Several developments worthy of close attention are currently 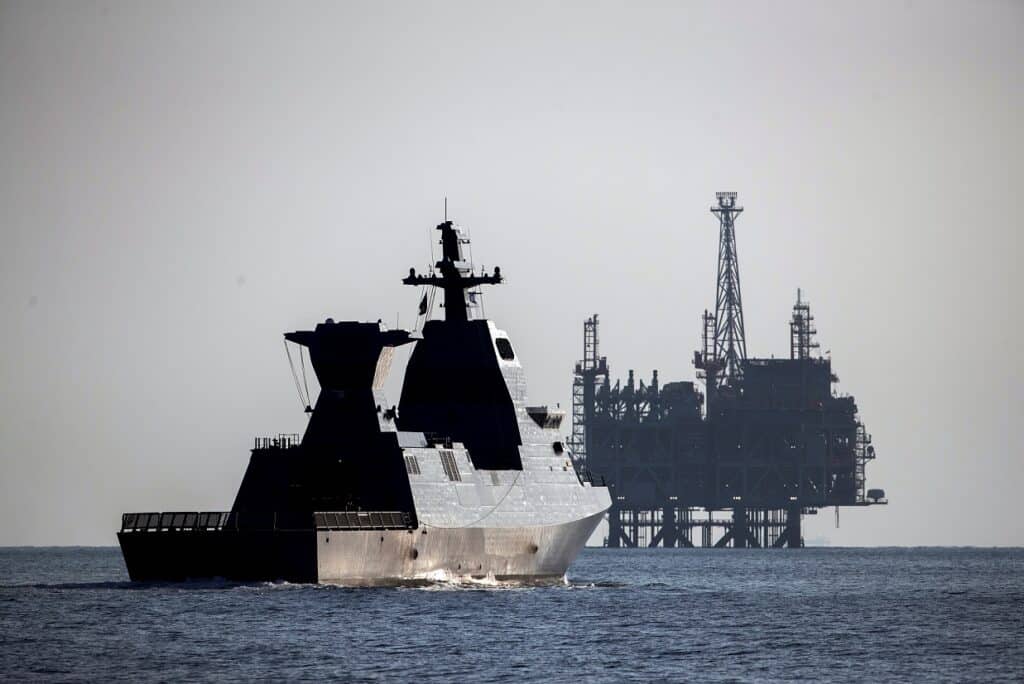 The MED This Week newsletter provides expert analysis and informed comments on the MENA region’s most significant issues and trends. Today, we sharpen the focus upon recent developments unfolding within the Eastern Mediterranean region marked by, among others, an historic maritime border deal struck by Israel and Lebanon.

Several developments worthy of close attention are currently taking place in the Eastern Mediterranean. The most conspicuous development is certainly the Israel-Lebanon deal, which – following years of US-backed negotiations – for the first time demarcates the two countries’ maritime border, possibly paving the way for boosted natural gas production in the area. Such a historic agreement neatly fits into the bigger picture of a “geopolitical complex”, the East-Med region, that is continuously shaped by energy and geo-strategic dynamics, and whose crucial importance resonates well beyond the region itself. Another is Turkey’s diplomatic (pro)activism, which is epitomised by the country’s rapprochement attempts with its regional neighbours such as Israel and Egypt. Improving relations with Tel Aviv and Cairo would also serve Ankara’s purposes to avoid the emergence of a new energy and security order stemming from the East Med Gas Forum (EMGF), which had excluded Turkey in previous years. The agreement on hydrocarbons exploration, which President Erdoğan reached in October with Libya’s Government of National Unity (GNU), has undoubtedly followed similar logic. Ankara’s latest moves, however, have contributed to fueling further tensions with Athens. Greece, and also Cyprus, believe that the Libya-Turkey deal violates their economic rights in an area where vast gas deposits have recently been discovered, thus escalating longstanding Greek-Turkish disputes. Under the current international juncture, the Eastern Mediterranean’s largely untapped gas reserves, mostly those across Cyprus’ and Israel’s coasts, are becoming of increased interest to European actors and the EU as well, as they might just help ease Europe’s energy crisis.

Experts from the ISPI MED network react to the latest developments in the Eastern Mediterranean. 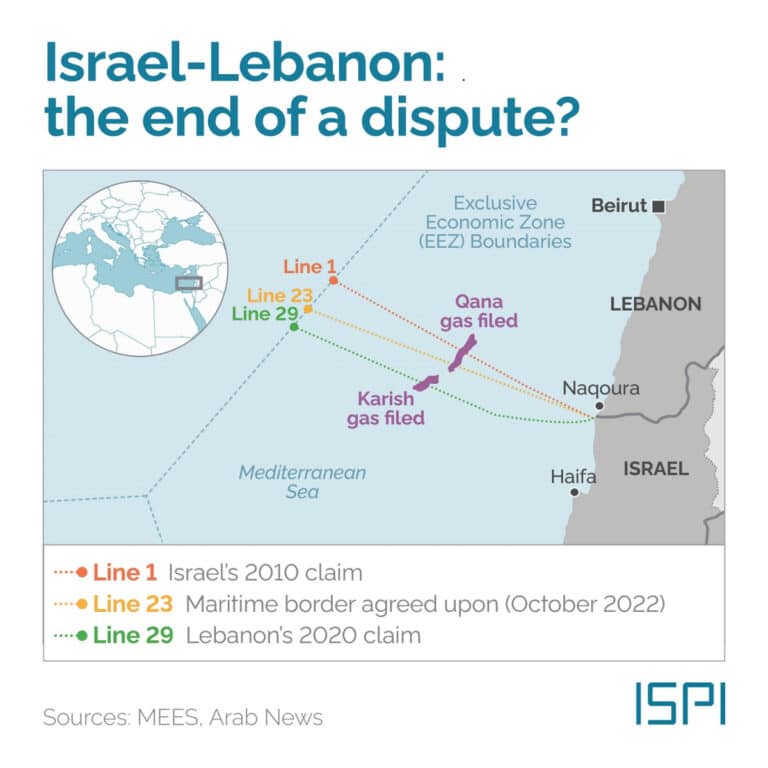 “The Israel-Lebanon maritime border agreement is a win-win situation for all parties involved. In the short term, Israel would gain some security assurances for its existing gas deposits, whilst Lebanon would gain the potential for substantial revenue once (and if) gas deposits are discovered in the area. In addition, this deal compels Lebanon to de facto recognise Israel’s existence officially, and thus also cooperate with it. However, the real benefits are in the long term. The more companies that come to the area to look for gas and discover new deposits, the more everyone wins. Neither country alone can justify the construction of a major pipeline from the East Mediterranean to Europe, or the building of a new LNG plant. However, together there is far greater economic potential for the development of such projects. Indeed, all sides are required to show the international community that they can reach compromises, and also cooperate over common financial interests.”

Israel gets economic and security benefits from the deal with Lebanon

“The deal between Israel and Lebanon is a milestone in the relations between the two countries. However, we cannot forget that, like many other agreements in the Middle East, it is purely pragmatic. Indeed, both parties agreed upon such a deal because of convergent economic interests with the perception of a limited window of opportunity. From Israel’s perspective, the agreement means increasing economic gains, whilst also fostering its security interests. Indeed, granting Lebanon access to gas resources is a move that boosts Israel’s ambitions on multiple levels. First, border security and the relationships between the two countries are likely to be strengthened; secondly, this deal is also expected to contrast Iranian interests within the region. Above all, the agreement helps Israel to avoid a new round of confrontation with Hezbollah, a threat that has loomed over the region for quite some time.”

With gas revenues still far away, the deal is a political gift to Lebanon’s ruling class

“The maritime border agreement reached by Israel and Lebanon is certainly a historical event. It will represent a factor of stability and offer new economic opportunities to both countries. But while Israel is very much ready to seize them, Lebanon lags behind. As commercial quantities of natural gas have yet to be discovered in the Lebanese sector, for the time being, the economic gains for the country and its population are just hypothetical. In this context, the real winner is the Lebanese political class. By reaching a deal with Israel, it scored public relations points at the international level whilst gaining something to show off at the internal one. Furthermore, if large quantities of natural gas were to be discovered, Lebanon’s ruling class might have just found a new revenue stream to fuel the system of nepotism and endemic corruption that sustain it.”

Energy cooperation will bear fruit only if sided by political dialogue

“Russia’s war against Ukraine, the EU’s intensifying energy crisis and the growing impact of climate change all evoke new assessments of the Eastern Mediterranean’s energy situation. The region’s untapped gas reserves off the coasts of Cyprus and Israel are again attracting much attention. Besides, a massive expansion of renewable energies and the set-up of new transport corridors for green electricity and hydrogen remain essential. In this context, for the EU reconciling urgent energy security needs and the objective of the energy transition is a major task that demands systematic prioritization and long-term planning. Overall, energy policy considerations alone will not suffice to develop new formats of regional cooperation, such as the East Med Gas Forum (EMGF). Amongst other factors, mounting tensions between Turkey and Greece and the divided island of Cyprus with its complex conflicts must also be addressed. Prospects for new formats of regional energy cooperation should, therefore, ideally also provide a platform for diplomatic initiatives and conflict mediation.”

“The geopolitical rationale behind the recent hydrocarbon deal reached between Turkey and Libya’s Government of National Unity (GNU) is as much about the Eastern Mediterranean as it is about Libya itself. Through the maritime deal recently signed with Dbeibah’s government, which follows the 2019 agreement with the Libyan government on the demarcation of maritime boundaries, Ankara is seeking to undermine the emergence of a new regional security and energy order, that would have been premised on a close partnership between a plethora of countries including Greece, Cyprus, Egypt, Israel the UAE (the East Med Gas Forum, EMGF), and from which Turkey had previously been excluded. Partially, the same rationale informs Turkey’s policy of regional reset in recent years towards its former rivals, notably Egypt, Israel, and Arab Gulf states such as the UAE and Saudi Arabia. In fact, one of the overarching goals behind Turkey’s rapprochement with Egypt and Israel is to prevent the rise of a united regional bloc against Turkey within the Eastern Mediterranean. In other words, Ankara aims to decouple Israel and Egypt from Greece, thus turning the Eastern Mediterranean crisis into a bilateral crisis between Turkey and Greece/Cyprus rather than leaving it as a multilateral crisis between Turkey and a host of countries, including Egypt, Israel, the UAE, Greece and Cyprus.”

Athens counts on regional cooperation to capitalise on energy resources

The recent signature of a hydrocarbons agreement between Turkey and Libya’s Government of National Unity (GNU) is viewed in Athens as yet another unfortunate and counterproductive development contravening international law, undermining the conflict resolution process in Libya and escalating the Greek-Turkish disputes on the delimitation of their respective maritime zones. The reaction of the Libyan Parliament (which opposes prime minister Dbeibah’s GNU), as well as Egypt and the European Union, only reinforces the validity of the Greek position. Greece will continue to pursue the monetisation of energy resources in the Eastern Mediterranean through regional cooperation based on international law, with the East Med Gas Forum as a chief example and also with renewable energy emerging as a historic opportunity for collaboration across the Eastern Mediterranean. Against this backdrop, it is imperative for Athens that domestic political calculations in view of the upcoming elections should not lead to initiatives threatening to destabilise regional stability and peace within the Eastern Mediterranean.”