Tensions in Jerusalem: What’s next?

The MED This Week newsletter provides expert analysis and informed comments on the MENA region’s most significant issues and trends. Today we turn the spotlight to Israel and the latest clashes in the Old City of Jerusalem, analysing their consequences at the local and regional levels. Tensions are mounting once again in Jerusalem. At the end

The MED This Week newsletter provides expert analysis and informed comments on the MENA region’s most significant issues and trends. Today we turn the spotlight to Israel and the latest clashes in the Old City of Jerusalem, analysing their consequences at the local and regional levels.

Tensions are mounting once again in Jerusalem. At the end of last week, the Israeli security forces raided the Al-Aqsa Mosque compound, a place considered the third holiest site in Islam which has often been at the centre of the Israeli-Palestinian conflict. The clashes that unfolded between the police and the protestersresulted in the wounding of dozens of Palestinians, bringing the number of injured since mid-April to more than two hundred. These events come amid the outbreak of a new wave of violence in Israel and the West Bank, as well as a political crisis in the Israeli parliament. Government leaders Naftali Bennett and Yair Lapid are coming to terms with the heterogeneous nature of the coalition they put together last year to oppose former Prime Minister Benjamin Netanyahu. On the one hand, the sole Arab party in the ruling coalition, Ra’am, decided to suspend its participation until tensions at the Al-Aqsa Mosque compound defuse. On the other, Bennett is facing mounting criticism within his party and right-wing constituency, with many calling for a bold response to the clashes. While it is unclear what the future holds for the Israeli government, the events of the past weeks are unlikely to result in a full-fledged military operation as witnessed in Gaza in 2021. Nevertheless, the decision to raid Al-Aqsa is already negatively impacting the relations between Israel and Arab states. For instance, despite the warm ties that it has established with the Israeli government, Egypt could not refrain from condemning the action of the Israeli police. The Arab League has shown a similar reaction, accusing Israel of violating the centuries-old practices that regulate the presence of non-Muslims in the Al-Aqsa compound. In this context, any false step risks further escalating the situation. 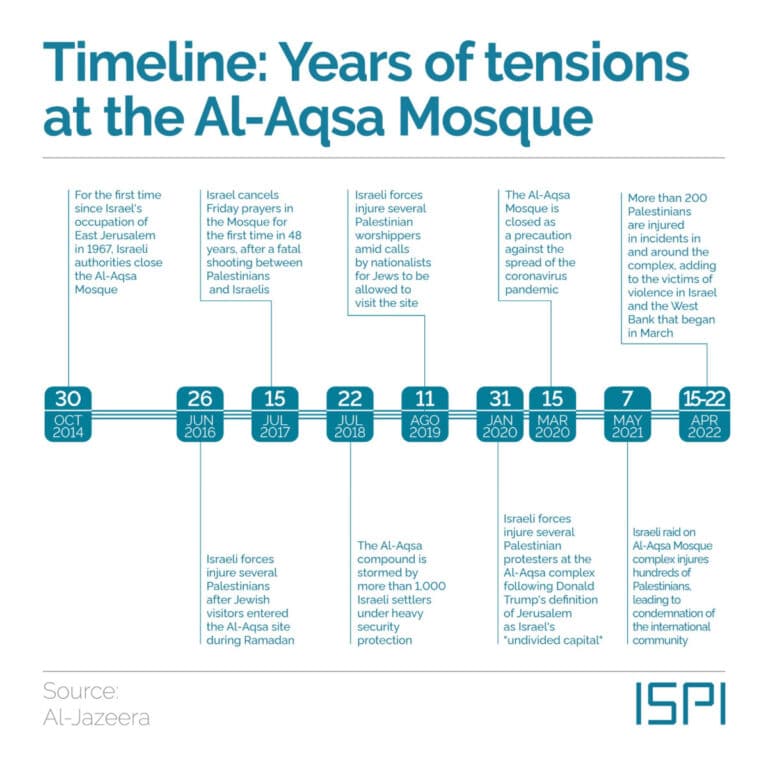 The experts of the ISPI MED network react to the local and regional consequences of the latest clashes in the Al-Aqsa compound in Jerusalem.

The Al-Aqsa raid: a “stress test” for Israel’s government

“The clashes in the Al-Aqsa compound pose a stress test for the staggering Israeli coalition. After the defection of the member of the Knesset Idit Silman, the government has lost its majority. Right now, the government heads Bennett and Lapid are battling to keep the alliance together that is threatened to be torn apart by the diverse political centrifugal forces. The temple mount clashes intensified the political tensions between the left and the right parties in the coalition. Yet especially critical is whether the Islamist Ra’am party will continue to be part of the group. The party suspended its membership for four weeks, but its members have threatened not to return should what they see as police violence continue.

At risk is not only the coalition but the very direction of the country, which would look very different with a return of Netanyahu to the helm. In addition, the idea of political pragmatism in the Arab/Palestinian-Israeli community is doomed to fail with this coalition and the exit of Ra’am.”

No united front in the Arab Israeli camp

“The elections of the 23rd Knesset marked a watershed moment in Israeli politics. The United Arab List, Ra’am, was the first Arab party to become part of a government coalition in the history of the State of Israel. Since the government’s formation, experts and public figures have expected its days to be numbered because of the complexity and diversity of its members. Quite often, Ra’am was singled out as the weak link in the coalition. Internal and external factors seemed to increase the chances of the party leaving the alliance. In recent weeks, in light of the clashes in Jerusalem (al-Quds in Arabic), the Ra’am leadership was under pressure from its ranks and other Arab parties. For this reason, the party decided to freeze its membership in the coalition.

This suspension was perceived by the main Arab political alliance, the Joint List, as a weak political stratagem. First, there is no legal precedent for such a procedure. Second, since the Knesset is on leave, no votes are scheduled for this period. Third, the move was coordinated with the prime minister and foreign minister. For these reasons, the relationship between the two lists is likely to remain strained. Even though the decision was coordinated with the government, it is still possible that the move will get out of hand. For example,  one of the coalition parties might use it against the government. In the meanwhile, events in Jerusalem have calmed down, and in a few days, the Knesset will resume its activity.”

The Israeli far-right is adding fuel to the fire

“Together with the Islamic radical wing of the Palestinian movement, the Israeli far-right – namely the National Religious Settlers – has an active and dangerous role in the conflict. Slowly but consistently since the 1967 War, the settlers in the Occupied Territories gained land and political power. This would have been impossible without the silent collusion and, very often, open support of Israeli governments – from both the Labour and the Likud. Naftali Bennett, the Israeli prime minister, is a settler. His deputy Yair Lapid, supposed to be a moderate, feels ‘uncomfortable with the idea that Jews’ praying on the Temple Mount ‘do not have freedom of religion’. The Temple Mount, the Haram al-Sharif for the Muslims, is ruled by a fragile status quo agreed upon by Israel. To unilaterally change the rules, means to ignite a confrontation. In Hebron, a small minority of settlers expelled the Arab population from the common holy sites. To a certain extent, the Israeli trend in Jerusalem recalls Hebron.”

The violence in Al-Aqsa: not a flashback

“During the holy month of Ramadan, there have been tensions, storming by the Israeli police to Al-Aqsa Mosque, raids, and arrests occurring in Jerusalem. While these developments are similar to what happened in May 2021, which ultimately led to a military confrontation between Israel and Gaza factions led by Hamas, the past days’ events did not lead to a large-scale war. This could be due to multiple reasons. First, the current government led by Prime Minister Naftali Bennett is too weak to wage war against Gaza just one year after its inception. Therefore, such a war would have no meaning or objective, especially since Hamas did not launch rockets from Gaza to Jerusalem as it did last year. Secondly, Hamas publicly made it clear that it was not interested in another confrontation. Conversely to the past, where mediators intervened remotely after the escalation started, the UN and Egyptian mediators were already on the ground and succeeded in preventing an escalation through face-to-face contact. Finally, the ongoing crisis in Ukraine has convinced the two sides that the world’s attention has been taken away by this war, to which neither factions have the time nor the resources. Overall, the situation continues to be very fragile. The escalation could happen at any time if no fundamental solution is found, such as Palestinian reconciliation and elections, as well as stopping the use of force against Palestinians and their holy places.”

Cairo is still committed to the Palestinian cause

“Even before the formal signing of the 2020-Abraham Accords , Egyptian-Israeli relations were going beyond the “cold peace” in Sinai. In 2021 alone, their trade rose 63% compared to 2020. Last month, we witnessed two milestone and exceptional events in Egyptian-Israeli relations. A tripartite summit in Sharm el-Sheikh between President al-Sisi, the Emirati Sheikh Bin-Zayed, and Israeli Premier Bennet and the multilateral meeting in the Negev, between Israel’s Foreign Minister Lapid and his Egyptian, Bahraini, Moroccan, and Emirati counterparts as well as US Secretary of State Blinken. As the manifestation of a new regional architecture, the Negev conference witnessed enduring, multilateral coordination, especially in the vital fields of technology and intelligence.

Though Americans and Israelis insisted that the principal objective was establishing a common front against Iran, this was not similarly emphasized by Arab foreign ministers and was explicitly marginalized by Egypt’s foreign minister Shoukry. Indeed, most of the Egyptian public opinion is still resistant to the complete normalization of relations with Israel, given the continuation of occupation and settlement policies. After the Negev meeting, Egyptian media and even Foreign Ministry sources continued to insist on the primacy of a solution to the Palestinian issue based on UN resolutions, the end of the occupation, and the two-state formula. In this respect, Egypt’s public opinion reflects the same mindset as most Arab countries.”

“The position of the Arab League regarding Israel and the Palestinians has not changed – and will not change – despite the normalization agreements under the so-called Abraham Accords between some Arab countries and Israel. Despite these agreements, the League is still committed to the Palestinians’ right to worship freely in Jerusalem’s holy sites as well as to their freedom of movement and expression in the occupied territories. Arab states, including the normalizing ones (Bahrain, the UAE, Sudan, and Morocco), have issued statements condemning Israel’s bruta treatment of worshippers in Jerusalem.

Arab states cannot contradict their people’s overwhelming support for Palestinians; the public still considers Palestine the most important Arab national cause. Public opinion surveys show that Arabs still see Israel as the premier threat to security and peace in the region. No matter how autocratic, Arab governments cannot totally ignore the wishes of their people regarding Palestine.”