The MED This Week newsletter provides expert analysis and informed insights on the most significant developments in the MENA region, bringing together unique opinions on the topic and reliable foresight on future scenarios. Today, we focus on Syria, recently back in the spotlight following the sixth edition of the EU-promoted Brussels Conference and Assad’s recent visit

The MED This Week newsletter provides expert analysis and informed insights on the most significant developments in the MENA region, bringing together unique opinions on the topic and reliable foresight on future scenarios. Today, we focus on Syria, recently back in the spotlight following the sixth edition of the EU-promoted Brussels Conference and Assad’s recent visit to Tehran.

Earlier this week, several nations participated in the sixth edition of the Brussels Conference, the EU’s main international fundraising event for Syria. International donors pledged USD 4.3 billion in new humanitarian assistance for 2022. Albeit significant, the amount is far from the UN’ demands, which have skyrocketed due to Syria’s compounding crises. On the domestic side, the recent rise in global prices has forced the Syrian government to lift subsidies on basic goods such as bread and fuel. This has deprived an already impoverished population of goods that are essential for daily survival. Furthermore, Damascus’ latest amnesty decree won’t erase decades of human rights violations, nor will it serve the regime’s efforts to support refugees’ return. On top of Syria’s socio-economic predicament, the regime is far from advancing its control over the country. In Idlib, the Hay’at Tahrir al-Sham (HTS) Islamist group is strengthening its grip over the last opposition-held enclave. At the same time, rising resentment across the southern regions of Daraa and Sweida has led Damascus to undertake extraordinary security measures to stifle protests. Internationally, Assad is able to cling to power owing to Russian and Iranian military and political support, as demonstrated by his solid ties with Tehran and support for the Russian invasion of Ukraine.

Experts from the ISPI MED network react to the latest events regarding Syria both at the domestic and international levels. 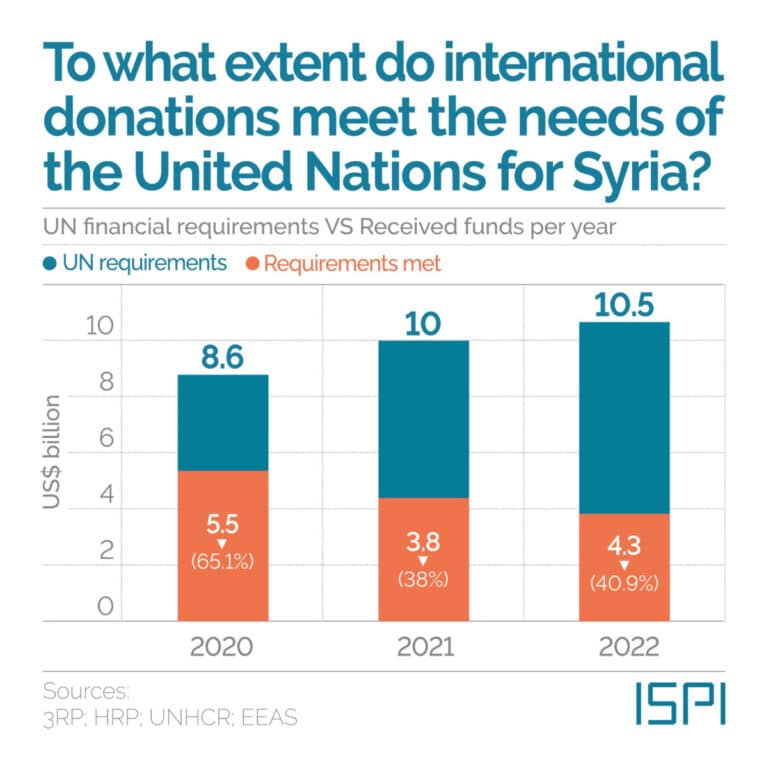 “The sixth edition of the Brussels conference, a yearly EU-sponsored meeting that serves as the main international aid fundraiser for Syria, took place on May 9 and 10. On paper, it looked great: donor nations pledged to give $4.3 billion to Syria in 2022. But these figures are alarming. Syria’s economy is crumbling, needs grow fast, and now come the price shocks on wheat and fuel caused by Russia’s invasion of Ukraine and Western counter-sanctions. To avert disaster, the United Nations had asked for $10.5 billion, but it didn’t even receive half of that sum—and that was in non-binding pledges, some of which are unlikely to be honored. In other words, aid fatigue has started to bite at the worst possible moment. If this mismatched trend continues in coming years, Syrians will die and instability will resume. Policymakers need to sit up and pay attention.”

Syria is sliding down deeper towards economic and food crises

“As the war in Ukraine drags on and more sanctions are imposed on Russia, it is likely that wheat imports into Syria will decrease significantly. This will have a direct impact on food security, as bread production — a staple food for Syrians — will decline. Moreover, Russia’s ability to subsidize Syrian energy needs will continue to shrink, which will only increase the price of energy products in the country.

To add to all of this, the Syrian regime has decided to lift part of its subsidies, principally on bread, which will only exacerbate food insecurity and could lead to local hunger and famine. This can partly explain Bashar Al Assad’s recent visit to Tehran as he attempts to find new — or renew existing — Iranian credit lines for fuel and food production.”

Too much dirt under Damascus’ amnesty carpet

“The Syrian regime aims to use the amnesty it recently granted for several reasons, such as turning attention away from leaked videos of executions in the al-Tadamon neighbourhood. The amnesty also fits within a pattern of actions taken by the regime to portray its intent to reform following the anti-torture law enactment in March 2022. This is supposed to help the regime’s efforts in persuading allies and other countries to endorse refugees’ return ahead of the Brussels Conference and Arab League Summit and the support for early recovery and reconstruction. However, the steps taken thus far are not enough to appropriately address the detainees and disappeared files given the small amount of people released (420 as reported by human rights organizations) compared to the number of detainees (160,000). Finally, though it addresses terrorism charges, the amnesty ultimately fails to address practices used to arrest and convict individuals perceived to oppose the regime, therefore not benefiting most detainees.”

In the South, the regime has a tough nut to crack

“As in other regions, the Syrian government faces a severe shortage of resources and rationing of basic foodstuffs and fuel in the city of Sweida. Added to this are high prices, the collapse of purchasing power, low wages, and damage to local agriculture due to climate change. Unsurprisingly, the recent government’s decision to exclude some social segments from subsidies caused widespread popular demonstrations in Sweida. Within days, the protest movement expanded and began raising clearer political slogans against the regime. Soon, Damascus sent unprecedented security and military reinforcements to the city. This show of force stopped the protest movement without improving economic conditions, thus likely leaving the chance for other protests to emerge.

On the other hand, the regime’s control in Sweida is shallow and indirect. A precarious security system compounded by the spread of gangs and weapons seem to be one of the regime’s new tools to manage disorder in the Druze-dominated governorate. Each security apparatus is linked to a group of local armed gangs competing over areas of influence and illicit markets (including narcotics, smuggling routes to Jordan and the Gulf states, and kidnapping for ransom). Furthermore, independent armed local groups are generally supported by social dignitaries and Druze clerics. Finally, armed groups may also be linked to neighbouring countries, such as Israel and Jordan. This multiplicity of conflicting actors could create a fragile balance that might allow a new civil protest movement to emerge. However, any protest movement would still deal with local actors and their political calculations.”

“Today, Hay’at Tahrir al-Sham (HTS) is the dominant actor in Idlib, as it undertook efforts to consolidate its control over north-western Syria over the last years. In 2017, it defeated rival group Ahrar al-Sham and backed the creation of the Syrian Salvation Government (Idlib’s de facto current government). In 2019, it achieved full hegemony after fighting another group, Nur al-Din al-Zinki. Moreover, since the summer of 2020, it has started to systematically clamp down on Hurras al-Din – a group of al-Qa’ida loyalists. This trend continues today, as other smaller militant groups have been targeted and come under pressure.

HTS’s recent actions serve multiple purposes. First, an internal one: by clamping down on rival groups, HTS makes sure it has full control over the area. Second, an external purpose: by repressing groups aligned with al-Qa’ida (Hurras al-Din) or comprising foreign fighters (Jund Allah, Jund al-Sham) the group seeks legitimisation vis-à-vis the international community. HTS’s bid to strengthen its control over the area also includes attempts to legitimize itself vis-à-vis the local population and improve its image. HTS’s leader Abu Muhammad al-Jawlani’s latest media appearances are a case in point. To gain legitimacy, HTS is also trying to focus on development projects by opening the Aleppo–Bab al-Hawa highway last January and introducing a food market north of Idlib last December.”

While the West looks to Syrians, Syria looks to the East

“By hosting Syrian President Bashar al-Assad, Iranian leaders have tried to kill two birds with one stone: to take advantage of Russia’s obsession with Ukraine in order to pave the way for an even more significant Iranian influence in Syria; while emphasizing Tehran’s alliance with Damascus – and also Lebanese, Iraqi, and Palestinian groups – as a counterweight to the emerging Arab-Israeli axis in the region. Furthermore, Assad’s visit should be seen as a response to the Arab normalization process vis-à-vis Syria, which has gained new momentum in recent months. Here, Iran wants to show its approval of Syria’s re-entry into the Arab fold: Iran’s Supreme Leader, Ayatollah Seyyed Ali Khamenei has indeed welcomed the development as an “increase in Syria’s credibility.” At the same time, by reaffirming Syria’s status as a member of the “Axis of Resistance,” Iranian leaders want to ensure that Syria’s Arab normalization is not a prelude to a similar process with Israel.”

Will Assad pay the toll for the Moscow-Damascus axis?

“Politically, the war in Ukraine does not change much for Syria. The 2nd of March vote at the UN General Assembly, when Damascus joined the group of five countries (including Russia) that voted against Moscow’s invasion of Ukraine, did nothing but confirm the full convergence of views between Assad’s Syria and Putin’s Russia. Still, that has been a fact for the past seven years, if not longer. Given the growing international marginalisation Russia will face in the future, it seems likely to expect that Putin will further strengthen the Moscow-Damascus axis even further. Still, again, that does not bring much novelty to Syria. And it is not like other Arab countries (nor Iran or Turkey) will condemn Damascus for strengthening this partnership: no MENA country has an interest in compromising relations with Moscow. However, on the economic level, a prolonged war between two countries responsible for providing most of the MENA wheat imports risks having a huge impact on food security. Syria, a country where an estimated 9 million people are on the edge of famine, would be hit harshly.”