Russia and the Gulf: Cooperation, No Matter What

The MED This Week newsletter provides expert analysis and informed comments on the MENA region’s most significant issues and trends. Today, we focus on Russia’s ties with the Gulf countries, discussing the consequences of Russian Foreign Minister Sergey Lavrov’s visit to Saudi Arabia. On May 31, Russian Foreign Minister Sergey Lavrov arrived in Saudi Arabia

The MED This Week newsletter provides expert analysis and informed comments on the MENA region’s most significant issues and trends. Today, we focus on Russia’s ties with the Gulf countries, discussing the consequences of Russian Foreign Minister Sergey Lavrov’s visit to Saudi Arabia.

On May 31, Russian Foreign Minister Sergey Lavrov arrived in Saudi Arabia for a meeting with the foreign ministers of the Gulf Cooperation Council (GCC) states. This meeting took place at a particular juncture for Gulf countries, caught between their historical partnership with Washington and the economic and political ties they have built with Moscow over recent years. In the wake of the war in Ukraine, these countries have opted not to back Western sanctions against Russia, while key players like Saudi Arabia and the United Arab Emirates have refrained from condemning the invasion of Ukraine altogether. With this visit, Russia intended to broaden its dialogue channels with the GCC. Their coordination in oil production was at the top of the meeting’s agenda, a debate that could have led to immediate results. The following day OPEC announced a boost in oil production that, however, only partially matches the rise in global demand caused by the sanctions. This decision might be interpreted as an answer to three needs: (moderately) increasing national oil revenues, accommodating US demands, and avoiding any moves that could seriously undermine Russia at this moment. In the meeting between Lavrov and the GCC foreign ministers, another topic of discussion centred on Iran, given the standstill in the nuclear deal negotiations. 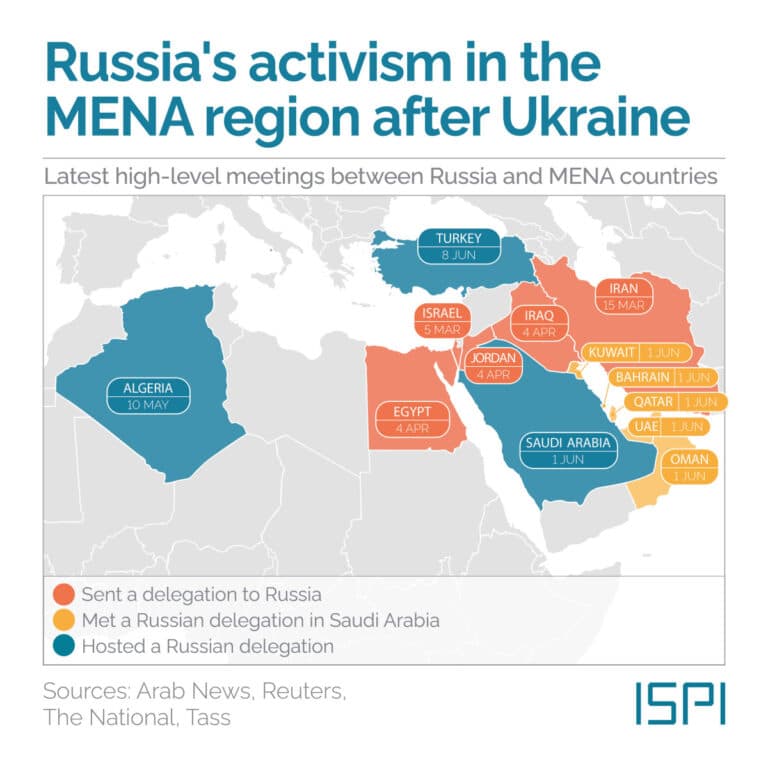 Securing a “not-too-negative” outcome for Russia

“Lavrov’s encounter with the GCC Ministers does not come as a surprise. The timing here is significant. Gulf States have remained neutral in the Russia-Ukraine conflict and, until now, had not ceded to US pressure to boost crude production to regulate prices. Lavrov’s visit to Riyadh – where he met all the GCC states representatives – came the day before an OPEC and non-OPEC meeting in Vienna (June 2) where the Organisation announced it will start pumping more to address global energy shortages caused by Western sanctions against Russia. Although the increase in production is quite limited – and scheduled only for July and August – such a decision seemingly represents a U-turn from the Organisation’s latest policies. Lavrov may therefore have travelled to Riyadh to secure dialogue with the GCC Ministers and a positive (or “not-too-negative”) outcome for Russia. Russian-Gulf trade outside of the oil industry was also on the table of the meeting, as well as Iran.”

“Russian Foreign Minister Sergey Lavrov’s meetings with UAE President Mohammed bin Zayed (MBZ) and Saudi Prince Mohammed bin Salman (MBS) highlight the challenges the two leaders face in keeping the OPEC+ commitment to deliver unprecedented oil revenues without threatening their already strained relations with the United States and its Western allies. MBS needs to fix a toxic relationship with Washington without losing face. The war in Ukraine has complicated the challenge facing both leaders: how to reconcile the immensely profitable OPEC+ arrangements with Western demands that they boost production to decrease both inflation and Russia’s leverage. Uncertainty around the revival of the JCPOA and fear that the US will lessen its commitments in the region further worries both leaders and requires they maintain good relations with Russia, the only powerful country with influence over Tehran. The recent OPEC+ production decision appears appropriately sized to keep prices high whilst scoring public relations points sufficient to entice President Biden to visit MBS in Riyadh.”

“OPEC’s decision to accelerate increases in production until August, rather than September, suggests a last-minute decision to accommodate Russian pleas ahead of the June 2nd OPEC+ meeting to effectively “free” it from its quota — much like already exempt members such as Venezuela, Iran, and Libya —recognising its inability to commit to allowed levels (it produced 9.14 Mb/d in April, well below its 10.43 Mb/d allowance). Some 120 kb/d additional crude will come from OPEC as a result of this new accelerated schedule in July, and another 235 kb/d in August, likely to be supplied by Saudi Arabia and the UAE. However, it might not make a major impact on markets due to other OPEC+ members’ continued underperformance and burgeoning demand triggered by a combination of reasons, not least of which is the EU’s stipulated 90% embargo on Russian supplies until the end of 2022. Moscow will want the deal to hold together to keep prices high enough for Washington and Brussels to reconsider sanctioning its oil, as OPEC can indeed be expected to respond to signals if prices continue pushing US$ 130/b.  Russia’s interest in the deal also lies in its need to generate meaningful revenues from its depleting exports to Europe and limited flows to compensating markets such as Turkey, India, and China.”

“The US’ withdrawal from the Middle East has strengthened GCC countries’ desire to create intraregional coalitions and to look for an external security provider. Russia might fit the bill, though the conflict in Ukraine throws this into question.

The GCC countries expect Moscow to influence Iran, limiting the dangers it poses. The possibilities of Moscow’s influence on Tehran remain limited, though Russia is trying to show GCC countries its ability to influence the implementation of the Iran Nuclear Deal. The resumption of the JCPOA as a whole is in the interests of all Gulf countries, including Iran. This is also important for Russia since it considers ensuring security in the Gulf a key regional goal. By expanding the dialogue between Iran and the GCC countries Moscow would be seen as an active participant in strengthening the region’s security; hence why Russia is actively promoting its proposals for the creation of a new collective security system in the Gulf”.