Putin’s meeting with Raisi and Erdogan: What’s next for Syria?

The MED This Week newsletter provides expert analysis and informed comments on the MENA region’s most significant issues and trends. Today, we focus on the visit that Russian President Putin and Turkish President Erdogan paid to Tehran, where together with Iranian President Raisi, they discussed the Ukraine war and the Syrian conflict. On July the 19th,

The MED This Week newsletter provides expert analysis and informed comments on the MENA region’s most significant issues and trends. Today, we focus on the visit that Russian President Putin and Turkish President Erdogan paid to Tehran, where together with Iranian President Raisi, they discussed the Ukraine war and the Syrian conflict.

On July the 19th, Russian President Vladimir Putin travelled to Iran in his second international visit since the invasion of Ukraine on February the 24th. In Tehran, Putin individually met with Iranian President Ebrahim Raisi and Turkish President Recep Tayyip Erdogan. He then held a summit with both leaders, with the Ukraine war and the Syrian conflict being the key issues upon the agenda. The three Heads of State all seemed to have different priorities for these meetings. President Putin was intent on showing that despite Western attempts to make the world believe otherwise, Russia is not isolated upon the international stage. Alternatively, President Erdogan was primarily interested in receiving a green light for a new military operation in northern Syria, which he has been threatening for some months now, and also securing the resumption of grain exports from Ukraine. Finally, President Raisi’s agenda focused upon trade and the defence of Iranian interests within Syria and the rest of the region. In this context, it is difficult to guess what the future holds for Syria and its poverty-stricken population. What is clear however, as further proven by the statement published after the summit, is that there seems to be little agreement between the three leaders on the country’s destiny.

Experts from the ISPI MED network react to the meeting Putin, Raisi and Erdogan held in Tehran to discuss the Ukraine war and the Syrian conflict. 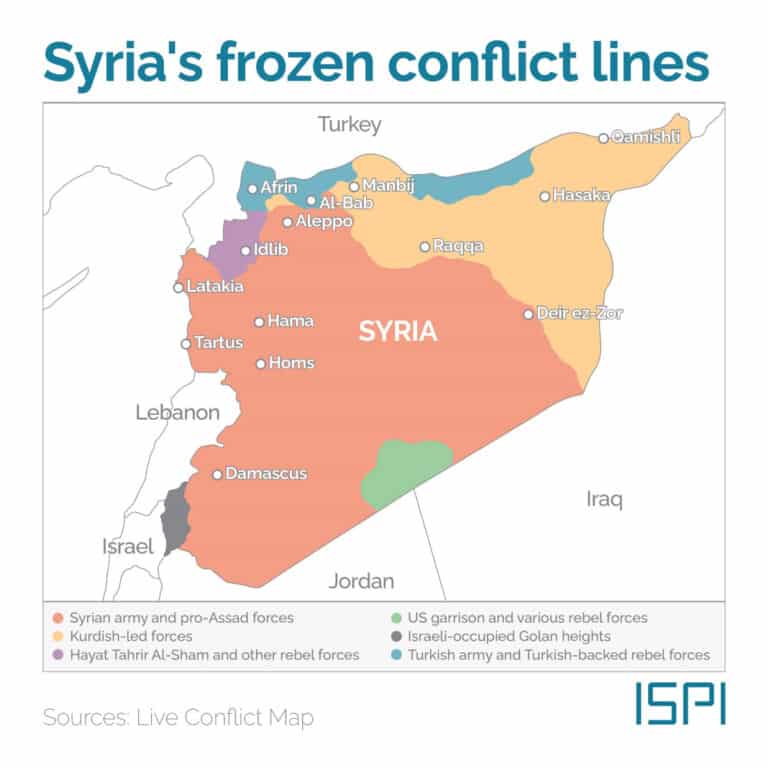 There is a lot of symbolism behind Putin’s visit to Tehran, or should we say Putin’s show in Tehran. The Russian President wanted to send the West a clear message: my country is not isolated, you will not isolate us; my country is not despised as you wish the world to believe, you may despise us, however others do not, and we will continue to keep business as usual with these countries. There is the whole scenography set of the “reversed echo” effect: Biden goes to the region, causing troubles for the Iranians, then Putin follows to Iran and recalls his good ties to the Islamic Republic. A postmodern nostalgia of the past century’s Cold War antagonisms, if you will, showing how Russia can be extraordinarily different from the US and is able to keep dialogue open with everyone. Then there is the image of the strong man of the Astana talks, the peace negotiations over Syria, which, Putin wants to stress, are not at all in the past. The message here is: Russia may have been busy with “fighting nazification” in Ukraine over the past months, but we will not forget the fight for the stability of Syria. Unfortunately, beyond the show, no concrete action was taken. No steps further in the political process; no steps further in the provision of humanitarian aid in rebels-held areas; and no Russian green light for Turkey’s dread incursion into Syria’s northeast (also vehemently opposed by Iran). For Syria, the deadlock continues.

With Russian and Iranian opposition, a Turkish operation remains unlikely in the near future

“Erdogan’s primary goal in Tehran was securing the Russian and Iranian approval to a new Turkish military operation in Syria. However, both countries had already sent early signals in June that they would not acquiesce such an operation. It seems that, negotiations in Tehran did not change the position of these countries. Therefore, a Turkish operation appears unlikely in the near future. Yet, in the long run, the real question is, how much risk are Russia and Iran willing to take if Turkey decides to act unilaterally and conduct operations despite the objections of both countries. In such a scenario, the scope and region of the operation will have utmost importance on the following developments. For one, Tal Rifaat region is most certainly a no-go zone for both Iran and Russia. Since Tal Rifaat is crucial for the security of Aleppo, neither country would tolerate a Turkish incursion there, and would stop it by force if needed. Being aware of this geopolitical reality, Turkey may push for a limited operation in the Munbic or Kobane area and try to gain some territories before a cease-fire is arranged by Russia or US.”

Iran’s strategy: Resetting its global image and defending the status quo in Syria

Tehran’s objectives from the trilateral meeting of Raisi, Putin, and Erdogan in Tehran are multiple. First, Tehran seeks a new power-sharing deal in Syria. It wants a political agreement that can prevent Turkish military action in Syria, secure the status-quo, and guarantee Iranian strategic interests amid the growing impacts of the Ukrainian war on Syria. Second, Tehran attempts to deliver its redlines about Ankara’s growing assertiveness in other fault lines across the region, such as border issues in Nagorno-Karabakh. In parallel, the Raisi administration considers the growth in Turkish-Iranian trade to $30 bn as part of its neighbourhood strategy to reduce economic dependency on the revival of the JCPOA. Third, Tehran assesses that the Western-dominated international system is in decline. Thus, strengthening ties with Moscow is indispensable to secure the country’s political and security interests. Besides, it sees immediate economic and trade benefits from working with Russia when US sanctions continue to block Iranian trade. Fourth, and finally, Tehran’s summit is part of Iran’s strategy to reset its global image. It aims to boost its position in international politics and show the US and Europe that maximum pressure has failed. Iran wants to signal that it can play big, and its decisions have impacts beyond the Middle East, including in global security matters like the war in Ukraine and energy security.

Assad is looking for an opportunity to challenge the status quo

“In the eyes of the Assad regime, recent developments may provide an opportunity to further disrupt political negotiations based on UN Resolution 2554, and further investing in the recent Russian victory at the Security Council on cross-border aid delivery. Recent developments suggest the intention of Russia and Syria to reinforce their strategic ties: on one hand, Russia pushed for the postponement of the Constitutional Committee’s next round after the regime requested a new location, on the other the regime recently recognized the independence of the separatist republics in East Ukraine and established several economic and political agreements with them. Additionally, the Assad regime is hoping that Russia, Turkey and Iran might reach an agreement that will allow the regime to expand its reach into Syrian Democratic Forces-controlled areas and deter any future Turkish military operation in north Aleppo.”

In the summit’s final statement, the omissions are of more importance than the actual content

There’s a Sherlock Holmes story in which the detective says the police should pay attention to “the curious incident of the dog in the night-time.” But the dog did nothing, says a baffled policeman, to which Holmes responds: “That was the curious incident.”
This story about the world’s greatest consulting detective came to mind as I looked at a statement put out by Russia, Turkey, and Iran after their July 19 Syria summit. It restated past conclusions, offering no real news. But in light of recent events, there were three curious omissions: it contained nothing on Turkey’s hope for a new Syria intervention, nothing on Russia’s push to move the Syrian constitutional talks out of Geneva, and north-east Syria didn’t get the usual dedicated paragraph.
What that tells me, dear Watson, is that Putin, Raisi, and Erdogan are not in agreement and that the talks will go on.