Putin’s invasion of Ukraine: A wake-up call also for the MENA region?

The MED This Week newsletter provides expert analysis and informed insights on the most significant developments in the MENA region, bringing together unique opinions on the topic and reliable foresight on future scenarios. Today, we turn the spotlight on Russia’s invasion of Ukraine, focusing on how countries in the MENA region are reacting to the outbreak

The MED This Week newsletter provides expert analysis and informed insights on the most significant developments in the MENA region, bringing together unique opinions on the topic and reliable foresight on future scenarios. Today, we turn the spotlight on Russia’s invasion of Ukraine, focusing on how countries in the MENA region are reacting to the outbreak of the war.

Similar to the rest of the world, MENA countries have also been caught by surprise by Russia’s invasion of Ukraine. So far, few governments of the region have expressed a clear position on the war. Since the first day of the war, Turkey has deemed the military operation against Ukraine “unacceptable” and expressed support for its territorial integrity. The United Arab Emirates, the only country in the region currently seating in the Council, followed in China and India’s footsteps and decided to abstain during the vote. A cautious approach to the crisis has been applied also by Saudi Arabia, which has so far refrained from taking any official position on the war. Although both countries voted in favour of the (non-binding) resolution of the UN General Assembly on March 2nd, this move does not hint at a substantial change in their approach towards the crisis. This was further shown by the lack of tangible outcomes delivered from the simultaneous OPEC+ meeting. The Gulf monarchies’ position reflects the political shifts that the region is currently experiencing, including a redefinition of US engagement in the area. Egypt and Israel have also expressed a similar neutral position. Cairo raised its concern over the crisis but did not declare its support for either Kyiv or Moscow. Israeli Prime Minister Naftali Bennett expressed his solidarity with Ukraine while refraining from openly condemning Russia. However, simultaneously, Foreign Minister Lapid condemned the attack and declared it a serious violation of international law. The only government to officially support the invasion was Syria, while Iran has embraced the Kremlin’s rhetoric by declaring that the crisis is “rooted in NATO’s provocations”. Aside from its political dimension, the war will impact the MENA region in several ways. The sanctions imposed on Russia offer some opportunities for countries such as Qatar, which might benefit from Europe’s energy crisis by increasing its gas exports. However, the invasion of Ukraine will also have clear negative consequences. Highly dependent on food imports, the Middle East and North Africa will suffer from the upcoming rise in global wheat prices. Russia and Ukraine are also two of the world’s top grain exporters, and the war will certainly affect wheat production and exports. This will have a profound impact on low-income households, with possible repercussions on the political stability of the MENA region. 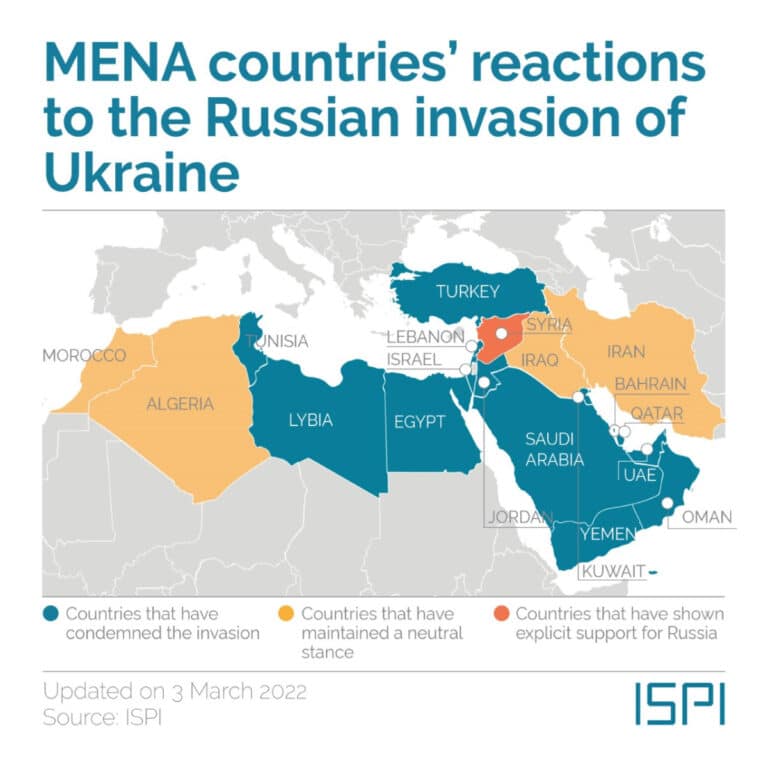 The experts of the ISPI MED network react to the different responses that countries in the Middle East and North Africa have given to Russia’s invasion of Ukraine.

“The war between Russia and Ukraine puts Turkey, which shares good relations with both countries, in a difficult position. Although it has condemned the Russian invasion as “unacceptable” and expressed its support for Ukraine’s territorial integrity, Ankara has to carefully balance its different interests and ties as to not make any move that could antagonise Moscow. Over the years, its relationship with Russia has shifted between cooperation and competition, in what some analysts have defined as an “asymmetrical interdependence” in favour of Moscow. While Russia is Turkey’s main gas supplier, covering 33% of its total import, as well as a significant trade partner, it is simultaneously a major competitor in the crisis theatres where both countries are involved. Turkey, a NATO member, will not join the US and EU sanctions against Russia. Yet, it decided to apply the Montreux Convention and closed the Bosporus and Dardanelles Straits to warships. Ankara is concerned about the implications of the war on the security and the balance of power of the Black Sea region. Not least, concerns are further related to the impact this conflict and consequent external turbulence will have on Turkey’s fragile economy.”

The UAE’s abstention is not about diplomacy, but national agenda

“After Russia invaded Ukraine, the United Arab Emirates is pursuing a non-aligned posture in the crisis, as emphasized by Abu Dhabi’s abstention on the UN Security Council resolution condemning Moscow. Publicly, the strategy is explained by UAE’s president advisor Anwar Gargash: we “believe that taking sides would only lead to more violence”. However, preserving diversified alliances (US, Russia, China, and India), economic bonds and national security seems to primarily orient recent Abu Dhabi’s choices rather than specific diplomatic intent. As the UAE abstained on Ukraine, the UN Security Council passed a resolution to extend the arms embargo to the entire Yemen’s Houthi group, defined as “terrorist”: differently from the past, the resolution was also voted by Russia. Then the UAE voted for the General Assembly resolution which “deplores” Russia’s “aggression against Ukraine”. However, this hyper-pragmatic path is extremely narrow for the Emiratis: the crisis has a too big international dimension. Due to its non-permanent seat at the UN Security Council, the UAE is the most exposed GCC country in the US-Russia new Cold War. If the crisis drags on – included economic sanctions – the UAE will probably enter a complicated phase in its relationship with Washington”.

“Saudi Arabia has stayed very quiet on the Ukrainian developments. At the OPEC+ meeting last Wednesday, the group concluded that there is no physical disruption to oil supplies (yet) and no market shortage, so it decided to continue with its phased target increases of 400,000 barrels per day (bpd) each month. In practice, members are already falling well short of this, and Russian exports are likely to be constrained in various ways, so this will tighten the market further. Saudi Arabia will at this stage not take any moves that may be construed as aggressive or hostile against Russia, but it has a tricky balancing act under the US and likely European pressure.”

Israel should opt for a clear position

“Israel needs to clearly support Ukraine and condemn the Russian invasion. This is the right normative and geopolitical position to take. It will be in line with the new Israeli government’s messaging about its commitment to liberal and democratic values, and it will be in line with Israel’s deep alliance with the US and the West. However, while Foreign Minister Lapid adopted such an approach in his recent public statements, Prime Minister Bennett (as well as other officials) refrains from mentioning Russia by name when declaring support for Ukraine. Israel is concerned that alienating Russia may lead Moscow to limit Israel’s freedom of action against Iranian targets in Syria. While this is a legitimate security concern, it should not deter Israel from being on the right side of history. As the crisis in Ukraine continues, and as international pressure against Russia continues to mount, Israel will need to make its position more and more clear and become part of various multilateral reactions. In parallel, it should positively consider Ukraine’s request to provide mediation support with Russia and continue its humanitarian assistance to the people of Ukraine.”

Food and Finances: The multiple challenges the Ukraine war poses to Egypt

“For Egypt, Russia’s invasion of Ukraine poses multiple challenges. The clearest challenge is the threat this war poses to Egypt’s food security. Egypt is the world’s largest importer of wheat while Russia and Ukraine are the world’s largest exporters. The impact is already being felt. Egypt has had to cancel two wheat tenders since the war began due to high prices and uncertainty of supply. Egypt’s recovering tourism sector will suffer as well, given Egypt’s popularity as a destination for both Russians and Ukrainians.

Another challenge for Cairo is how to position itself diplomatically. Egypt depends heavily on Western financial assistance and purchases large amounts of Western arms. However, it also values its warm ties with Moscow and recently contracted Russia to build a nuclear power plant (though construction is on hold). The G7 ambassadors in Cairo have asked Egypt to condemn the Russian invasion. The government is likely weighing the cost of refusing against the benefits it can extract from Western partners if it issues one.”

Damascus might be reluctant about following Moscow on Ukraine

“Bashar al-Assad’s government has fully endorsed the invasion of Ukraine, and it echoes Russia’s official narratives at every turn. Assad called Putin soon after the war began to express support. According to the official readout, he even repeated the dumbest parts of Russia’s propaganda, claiming Ukraine is controlled by ‘Nazis.’

None of this is unexpected, of course. Assad’s regime is too dependent on Russia to question Kremlin policy, especially on an issue of such great importance to the Russians. But it’s not obvious that the leaders in Damascus are happy about Putin’s decision. In so far as Russia is distracted or weakened by the war and Western sanctions, that could be bad for its Syrian partner. Syria will also suffer from disruptions of the Black Sea trade. Russia and Ukraine are leading grain exporters, so wheat prices are now rising fast, which will deepen the humanitarian crisis in Syria.”

Tehran: pointing the finger to the West but not endorsing the Kremlin

“In recent years, developing relations with Russia has been a foreign policy priority for Iran in the context of its “Look to the East” policy. Thus, Iran’s position in not condemning Russia’s aggression against Ukraine was expected. But, Iran has not endorsed the Russian move either. Any Iranian support for the violation of another state’s sovereignty would set a precedent that could someday be used against Iran by foreign powers. Currently, there is no sign that the Ukraine crisis will have an immediate negative impact on the negotiations to revive the JCPOA. As a nuclear power, Russia favours containing Iran’s nuclear program and ensuring that Tehran won’t be able to build a nuclear weapon. However, there are concerns that tensions between Russia and the West might complicate the implementation of any agreement, especially in some technical aspects, such as the transfer of Iranian uranium to Russia.”

“The war in Ukraine offers opportunities for Qatar diplomatically and energy-politically. With Qatar significantly expanding its LNG output in the next five years, the energy crisis in Europe caused inter alia by the war in Ukraine means that a range of European customers is trying to diversify their gas imports away from Russia towards Qatar. This will increase the market share for Qatar’s LNG and improve Qatar’s competitive position towards Russia in the energy market. Diplomatically, Qatar has excellent relations with the Ukrainian government while also maintaining a pragmatic working relationship with Russia. Therefore, Doha might be looking for an opportunity to mediate between both parties – something that very much corresponds with Qatar’s raison d’état and would allow Doha to draw upon its good relations with western partners, most importantly with the United States.”