MENA Oil & Gas in the Energy Crisis: A Thorn Bed for Washington?

The MED This Week newsletter provides expert analysis and informed comments on the MENA region’s most significant issues and trends. Today we turn the spotlight on the challenges the United States is facing to shore up ties with unsatisfied allies in the Middle East and North Africa and tackle today’s energy crisis. The United States is

The MED This Week newsletter provides expert analysis and informed comments on the MENA region’s most significant issues and trends. Today we turn the spotlight on the challenges the United States is facing to shore up ties with unsatisfied allies in the Middle East and North Africa and tackle today’s energy crisis.

The United States is striving to strengthen bonds with its major Middle Eastern allies, as it seeks to deal with the dire effects of the Ukraine war on global energy and food security. Since the outbreak of the conflict, Washington has attempted to encourage oil-producing countries like Saudi Arabia, the UAE, and Qatar to increase their output and reduce Europe’s dependency on Russian imports. OPEC member states have thus far declined to do so, sticking to the oil production plan so far agreed with Russia. Unlike Doha, Riyadh and Abu Dhabi dodged Western appeals, triggering a debate about whether they can step in to fill the gap. From their side, Gulf monarchies are disappointed at what they consider a declining US commitment to their security, epitomised by Washington’s stance on the Iran nuclear deal as well as on the recent attacks from the Houthi rebel group. American demands also overlap with the growing ties between Arab Gulf states and China. These seem to have broken new ground as Riyadh and Beijing are now considering using the Chinese yuan for future Saudi oil sales. To date, both the US and the EU have refrained from sanctioning Russia’s energy industry without alternative arrangements for Russian natural gas. In the past weeks, European politicians such as the UK Premier Boris Johnson and German Minister for Economic Affairs and Climate Action Robert Habeck travelled to Gulf capitals to secure their energy needs. Similarly, on March 26th, US Secretary of State, Anthony Blinken, embarked on a five-day tour to Israel, Morocco, and Algeria to expand economic and diplomatic cooperation with key US partners. Despite his meetings with the UAE Crown Prince Sheikh Mohammed bin Zayed al Nahyan in Rabat and the Algerian President Abdelmadjid Tebboune, Washington’s top diplomat failed to achieve tangible results in the energy sector. 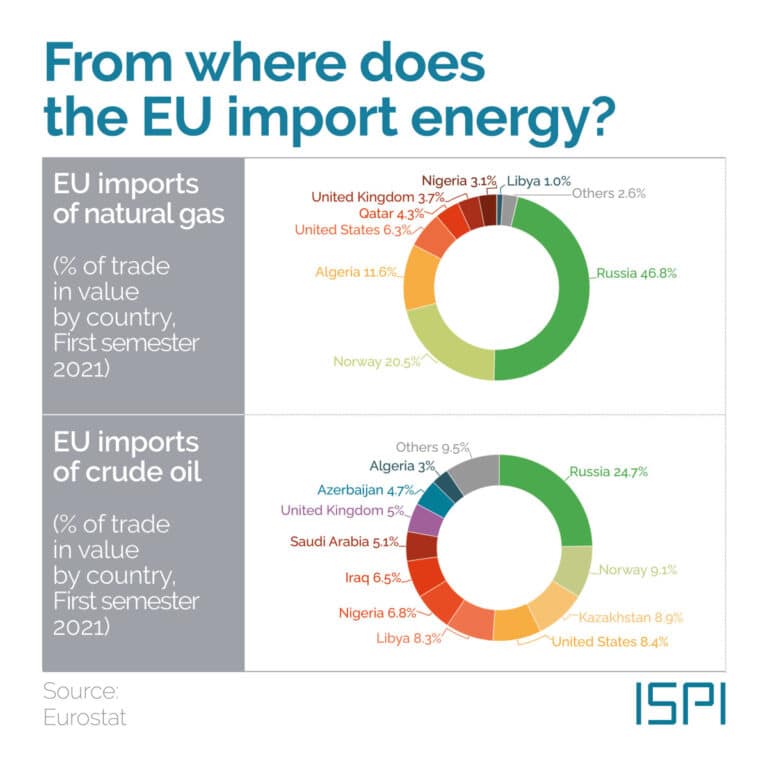 The experts of the ISPI MED network react to the unresolved political and energy challenges of US influence in the MENA region in the aftermath of the crisis in Ukraine.

The Ukraine war will not affect the oil giants’ plans

“The Gulf Arab states find themselves at the centre of an international energy crisis, with diplomatic and financial leverage. There has been a growing sense of independence among these six states of the GCC to pursue their interests separately in foreign policy, but also in their economic competition with each other, and for some, to position themselves as integral to the shifts in the global economy. OPEC+ has meant that Russia is more part of that leverage, but for the UAE and Saudi Arabia, this also means tremendous opportunity for profit-taking in a tight oil market, perhaps new market share. Spare capacity has its limits and is not an automatic lever to increase. However, just the act of refusing to convene and consider more production is an act of independence and a demonstration of will, particularly to make the point that some members will not take direction from Washington. Even as oil prices are high now, it is somewhat counterproductive to stake a reputation on being unwilling to compromise, both on energy policy and on shunning Russia politically.”

The UAE will pursue its own agenda (despite US assurances)

“Officials in the United Arab Emirates (UAE) are upset with many aspects of the Biden Administration’s foreign policy, from nuclear negotiations with Iran to the suspended F-35 deal and Yemen. Abu Dhabi is making its frustrations with Washington known. The UAE, by taking a ‘neutral’ stance on Russia’s invasion of Ukraine, allowing Russian oligarchs to park their wealth in the Emirates, welcoming Syria’s president to Dubai and Abu Dhabi, along with Mohamed bin Zayed’s refusal to speak directly to Biden, all underscore the Gulf state’s keenness to assert its increased autonomy from the US in a multipolar world. Yet, Abu Dhabi does not want to walk away from the US, which remains the UAE’s security guarantor. Rather, the Emiratis are making it clear they will pursue their own agendas based on Abu Dhabi’s perceptions of the UAE’s national interests without Washington’s frustrations and disappointments stopping them from doing so.”

Riyadh’s oil-for-yuan bid: a threat to the dollar?

“Since last year, the world has been facing a growing energy crisis. While the COVID pandemic reduced demand, economies worldwide have started to grow again and expose shortages in all energy types, from gas to oil. With Russia’s invasion of Ukraine likely to reduce the country’s share of oil exports, the US recently asked Saudi Arabia to increase production – a request that has been ignored so far. Washington’s appeal also coincides with Saudi Arabia’s growing ties to China, a growing rival for the Americans. Their relationship seemed to break new ground the other week when Riyadh and Beijing proposed to use the Chinese yuan to pay for future Saudi oil sales. If it happens, it will boost Chinese ambitions to make the yuan a global currency and make the Saudis less reliant on the dollar. However, the Saudi-Chinese move may not be enough in itself. For one, dollars make-up more than 80% of world trade while the yuan makes up 2%. For another, the yuan will need to become more available than it currently is. Right now, the yuan only makes up 2% of central banks’ foreign reserves compared to 60% of dollars and 20% of euros. Additionally, some conditions will also need to be met for Beijing to achieve its goal, including more predictable and transparent monetary policies that would make banks and firms want to use the yuan.”

“European countries – such as the UK and Germany – are scrambling to lessen their dependency on Russian gas and oil, prevent further energy price hikes, and brace for the possibility of Russia cutting off energy flows to Europe. Publicly, Boris Johnson came home empty-handed, while the Germans secured  a ‘long-term energy partnership’ with Qatar for LNG export – best understood not as a ‘contract’ but the beginning of a strategic roadmap towards a deal.

Four challenges stand out for Europe. Firstly, Europe does not have enough LNG infrastructure (namely storage and regasification facilities) to cope with the situation. Secondly, most of the Qatari LNG is locked in long-term contracts (mostly with Asian importers such as China and Japan) and cannot be diverted to Europe at will. As only 10%-15% can be redirected, Doha said it is almost impossible to replace Russian gas quickly. Furthermore, Qatari mega trains went down last February, leading to a significant decline in export capacity. Export infrastructures can also be the target of military attacks in the Middle East, such as the recent Houthi attacks against Aramco facilities in Saudi Arabia. Finally, Europe will still be dependent, but this time on another set of actors, such as the GCC and the US – and later perhaps Iran if JCPOA is reinstated. These exporters can use their newly found prominence to leverage the EU countries geopolitically. Natural gas is a good short-term option, but the best strategy for the EU would be to use this gas as fuel for an accelerated transition towards the net-zero emission goal by 2050, as outlined in the European Green Deal.”

“Blinken is the first US Secretary of State to have visited the country since 2014, with the agenda dominated by the impact of Russia’s invasion of Ukraine. Algiers abstained from UN votes on the ongoing conflict and has historical ties with Moscow. While the energy crisis has loomed in the background of the discussions (at the beginning of March Washington had reportedly exerted pressure for the re-opening of the Maghreb-Europe pipeline), other dossiers such as bilateral economic cooperation, regional stability and crises in Libya and in the Sahel held a more prominent role.

Algeria is the third largest supplier of natural gas to the EU. In the last weeks, the state-owned company Sonatrach has said to be ready to increase its exports to Europe. Still, the decade-long structural decline of the Algerian hydrocarbon sector and the closure of the Maghreb-Europe pipeline due to tensions with Morocco will limit Algiers’ ability to increase its export volumes to only 2-3 billion cubic meters per year in the short term – less than 2% of the total EU imports of Russian gas in 2021.”