The MED This Week newsletter provides expert analysis and informed comments on the MENA region’s most significant issues and trends. Today, we turn the spotlight upon Libya, looking at the end of a three-month oil blockade in the country as well as the recent clashes among militias in Tripoli and Misrata. In Libya, oil has begun

The MED This Week newsletter provides expert analysis and informed comments on the MENA region’s most significant issues and trends. Today, we turn the spotlight upon Libya, looking at the end of a three-month oil blockade in the country as well as the recent clashes among militias in Tripoli and Misrata.

In Libya, oil has begun to flow again after the new chairman of Libya’s National Oil Company (NOC), Farhat Bengdara, announced the lifting of force majeure restrictions at all the country’s oil fields and export terminals, effectively ending a three-month blockade. Many of the country’s key oil terminals had been closed since mid-April when General Khalifa Haftar’s coalition decided to shut down oil production as part of a broader campaign to replace the Tripoli-based Prime Minister, Abdelhamid Dbeibah, with a new government headed by the Tobruk parliament-appointed Prime Minister, Fathi Bashagha. The end of the blockade and the resumption of oil exports, sponsored by some international actors, came after a new arrangement between Dbeibah and Haftar. Such a deal, which seems to pave the way for new economic and political scenarios, includes, among others, the replacement of Mustafa Sanalla – who had led the NOC since 2014 – and the promise of key ministries in the Dbeibah-led Government of National Unity (GNU) to Haftar’s camp. On the one hand, the oil output recovery will have a positive impact on the country’s revenues. On the other, this arrangement could mar the already strained political relations between the two rival administrations even further. Against this backdrop, recent waves of social unrest in some of Libya’s major cities, and the violent clashes between militias in Tripoli and Misrata, which resulted in 16 casualties (including civilians), continue to reflect the fragility and fragmentation of the country’s socio-economic and security context. At the same time, an increasingly less credible United Nations (UN) struggles to appoint the successor of Stephanie Williams as UN representative in the country.

Experts from the ISPI MED network react to the latest political and economic developments in Libya. 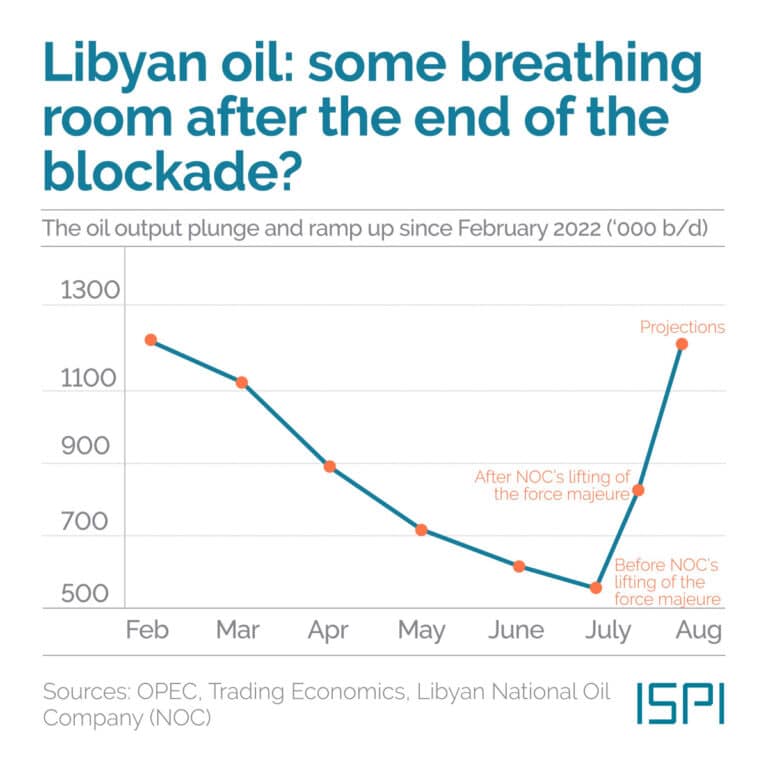 A dangerous gentlemen’s agreement between Dbeibah and Haftar

“As the international process to deliver elections and political change to Libya fades, Libya’s elites are increasingly determined to consolidate power and economic opportunities. Prime Minister Dbeibah’s recent deal with General Haftar encapsulates this dynamic and its damage. In a desperate attempt to reclaim Libya’s oil wealth and neutralise Bashagha’s political threat, Dbeibah promised key ministries to Haftar’s camp as well as benefits to the UAE in return for their support. Neither promise is likely to be completely honoured, yet the oil industry has re-opened, the NOC has changed hands, and Haftar is making inroads into Tripoli. However, as a result of this arrangement there has been no stabilization, but only fragmentation of all camps. Indeed, the flows of money and the appearance of instability that accompanied Dbeibah’s deal are provoking Western Libya’s militias to grab more and could spark violent insurrections to stop Haftar’s encroachments. Without a renewed push for change and elections, Libya’s elites will continue their zero-sum fight and the atomization of Libya in the process.”

Political conflicts in the country may now turn into money disputes

“The Emirati-orchestrated change in the NOC’s leadership should by no means be seen as proof of some agreement or rapprochement between Dbeibah and Haftar. There is none; the field marshal has made no concession involving any cost to himself. By ending their oil blockade, the Haftar family relinquished none of its leverage since all oil-export revenues are stored in a dollar account now controlled by a pro-Haftar figure. As a result, the Libyan National Army (LNA) has made no significant concession, while the Dbeibah family has made a major one. Now, assuming Mustafa Sanallah does not regain the NOC’s chairmanship by winning his lawsuit, Libya’s oil industry — under Farhat Bengdara — will likely be more amenable to new deals with international oil companies including Emirati and Turkish groups. Political conflicts will now take the form of money disputes or direct military clashes, but disagreements will be less likely to manifest as oil blockades. This is because of Bengdara’s pro-Haftar political sensibilities, which will now influence how revenues are allocated as they are released from the NOC’s dollar accounts.”

The muted response to militia clashes doesn’t herald anything good

“The clashes that unfolded between militias in both Tripoli and Misrata in the past week are rooted in the policy failures to address the impasse in Libya’s political transition. On the one hand, the greed of the two contending Prime Ministers and their unwillingness to compromise has torn at their native Misrata’s social fabric, manifesting as unprecedented communal violence. On the other, the legitimacy crisis Western countries have carelessly entertained for months has transformed territorial control in Tripoli into a grail. This has shifted the calculus of the flurry of armed groups with a footprint in and around the capital. These groups are now willing to broker alliances, and use indiscriminate violence to gain and consolidate territory ahead of the next chapter in Libya’s transition. The muted response to both bouts of violence is ominous, as it now paves the way for a broader conflict to erupt.”

Will the end of the oil blockade ward off the risk of new protests?

“On July the 1st, hundreds of people took to the streets to protest against the deterioration of living conditions within the country, blackouts, increasing price of staple goods, and the absence of agreement over presidential and parliamentary elections. In this last respect, UN-backed negotiations in Geneva failed to find a compromise the day before. The demonstrations spread over the whole country, from the capital, to Cyrenaica and the southern region of Fezzan. The House of Representatives in the eastern city of Tobruk was set on fire. These outbursts of anger posed additional pressures upon the two rival centres of power; the oil blockade was indeed among the factors that exacerbated the problem of power outages, fueling protests across the country. The end of the blockade, and the arrangement between Dbeibah and Haftar, may alleviate at least some social grievances and reduce the risk of new escalating protests in the short term.”

Beyond the Security Council impasse, the UN remains an empty shell in Libya

“A simple conclusion that could be drawn from the ridiculous situation in which the UN Security Council has found itself would be to blame Russian opposition to any candidate put forward for the post of UN special envoy for Libya that could be seen as close to the US. Russia has made it clear that it would apply its veto power to oppose any unfavourable decision to its leadership. But it is also true that other international actors, such as the UAE, have exercised their power in the field by de facto vetoing other candidates. While this is important, another reason could be more to the point. After the loss of credibility of the UN Support Mission in Libya (UNSMIL), local actors have learnt that they could manage the negotiation process internally, with far greater benefits for themselves. This has been understood by some foreign actors who saw a convenience in dealing directly with their proxies and thus avoiding the UN mission’s oversight. Whether the UN in Libya has a future remains to be seen, but in the short term, it looks challenging for the UN Secretary-General to appoint a suitable candidate as his special envoy for Libya.”