The MED This Week newsletter provides expert analysis and informed comments on the MENA region’s most significant issues and trends. Today we turn the spotlight on Libya, where the Tobruk Parliament’s move to nominate a new prime minister has reopened divisions between rival factions, raising fears of renewed instability in the fragile country.  Libya seems to

The MED This Week newsletter provides expert analysis and informed comments on the MENA region’s most significant issues and trends. Today we turn the spotlight on Libya, where the Tobruk Parliament’s move to nominate a new prime minister has reopened divisions between rival factions, raising fears of renewed instability in the fragile country.

Libya seems to be sliding deeper into political chaos as on February 10th, 2022, the Tobruk-based House of Representatives (HoR) announced its decision to replace Prime Minister Abdulhamid Dbeibah with Fathi Bashaga. A well-known Misratan politician and a powerful figure in western Libya, Bashaga previously served as Minister of Interior in the Government of National Accord (GNA). The Eastern-based Parliament’s decision came when Libya was already faced with political limbo, after failing to hold national elections on December 24th that were intended to start a process of political stabilization. The appointment was directly supported by the HoR’s Speaker, Aguila Saleh, and General Khalifa Haftar, even though they were both on different sides than Bashaga’s during the civil war. In contrast, the incumbent Prime Minister Dbeibah has persistently refused Bashaga’s nomination, after surviving an assassination attempt only hours before the vote. The decision was also opposed by Pro-Dbeibah militias that rapidly rallied into the Libyan capital. As Bashaga initiated the consultations to form a new government following the vote, Dbeibah and Saleh presented two different roadmaps for Libya’s political transition. By setting two distinct dates for the country’s long-awaited elections, these conflicting roadmaps introduce an additional layer of complexity in Libya’s political landscape. In the face of these developments, the UN has announced that it will continue to support Dbeibah as Libya’s interim Prime Minister, while reiterating the need for an inclusive political process. Nevertheless, the events of this past week might result in the establishment of two opposing administrations. This development risks further jeopardising Libya’s transition, bringing it back to a time where it served as a battleground for two rivalling governments. Once again, the threat of yet another spiral of violence looms over Libya.

Experts from the ISPI MED network react to the appointment of a second, concurrent Prime Minister in Libya, a move that could fuel division and derail the United Nations-led efforts to reconcile the fragile country.

“Aguila Saleh’s appointment of the new rival Prime Minister, Fathi Bashaga, is an intentional attempt to seize power from the GNU’s Prime Minister Dbeibah, given that presidential elections are now unlikely to take place in addition to the House of Representatives desperately seeking to avoid holding parliamentary elections and removing him from power.

Despite protests in Tripoli against Saleh’s decision, the main concern for Libyans is how Bashaga and Dbeibah’s political rivalry will impact the ceasefire. Bashaga is backed by Khalifa Haftar’s Libyan Arab Armed Forces (LAAF), who attempted to overthrow the last government in Tripoli in 2019. Bashaga’s alliance and attempt to seize power from Dbeibah in Tripoli, forces powerful armed groups to choose which administration they support, exposing an ideological fault line that fractures military alliances in Western Libya and could spark a new round of violence.”

All the limits of the Libyan political class

“The House of Representatives (HoR) appointment of Bashaga with the intent to undermine the Prime Minister in office Dbeibah represents a further blow to the Libyan process of democratization and shows how Libyan politicians are not interested in the common good as much as in their own personal interests. Dbeibah is also part of this picture: nobody seems to be able to escape. On a practical level, unless Bashaga takes a step back, increasingly acute tensions are foreseeable – Tripoli’s citizens have already begun protest in the streets against the HoR and Bashaga. This appointment, decided by a parliament that expired years ago, obviously has no political value but is synonymous with the absolute superficiality and corruption of the Libyan leadership. The international community has not endorsed it at the moment. Still, a critical self-analysis must be carried out to understand all the mistakes made that have led, once again, to the paradox of two prime ministers.”

Bashaga’s “Faustian bargain” with Haftar: Libya at all costs?

“Fathi Bashaga’s newly forged alliance with Khalifa Haftar could turn out to be a Faustian bargain. Haftar’s backing was essential in securing the support of the Tobruk-based parliament that appointed him as prime minister-designate. It was also important optics-wise: by joining hands with his former battlefield enemy, Bashaga was able to pitch himself as the right person to bridge Libya’s East-West conflict divides. But it comes at a cost. In exchange for Haftar’s support, Bashaga has supposedly agreed to grant key ministries such as defence, interior and finance to pro-Haftar officials and has allegedly promised to increase the financial allocation to the Haftar-led forces. These demands reflect how security portfolios and finances remain a Haftar priority. But whether the Tripoli-based constituencies will accept such concessions still has to be seen.”

“Libya’s militias are at the centre of the current power jockeying in Libya. Consequently, their positioning vis-à-vis the contending political players will be the main deciding factor in the shape of the landscape to come. This is part of the reason why both Fathi Bashaga and Abdelhamid Dbeibah have engaged in recent shows of force in the Libyan capital of Tripoli, mobilizing armed groups aligned under them in a policy of brinkmanship and military entrenchment that could easily devolve into armed clashes. However, one thing to note is that, in pursuing alliances with Khalifa Haftar and the militias he once vowed to dismantle in Western Libya to claim legitimacy, it will be difficult for Bashaga to sustain the reformist platform he once leveraged credibly. In short, the manoeuvring of the current protagonists of Libya’s transition is not conducive to any meaningful overhaul of the country’s security sector.”

“The absence of sustained mediation efforts and pressure on Libyan parties after forming the Government of National Unity (GNU) has contributed significantly to the resumption of institutional divisions. Rival factions have been left to themselves and encouraged to continue privileging competition for power rather than consensus-building around fundamental principles that could organise political life.

While surprise deals between factions can never be excluded entirely in Libya, the rival initiatives of Abdelhamid Dbeibah and Aguila Saleh illustrate their (shared) lack of interest in building functional and representative political institutions. Without the resumption of a political dialogue process aimed at pressuring rival factions, it is unlikely that meaningful elections can be organised soon, let alone contribute to durable peace.”

No more stones in the bag for the UN in Libya?

“The House of Representatives efforts to wrest control of the political process in Libya from the UN threatens to derail what remains of the Berlin-Libyan Political Dialogue Forum (LPDF) process. To date, the HoR’s record illustrates that its leadership of the constitutional track and proposed 14-month delays to elections are unlikely to deliver anything more than a further entrenchment of existing elites. The Fathi Bashaga’s appointment as prime minister designated by Tobruk places him in direct competition with Abdelhamid Dbeibah, who was appointed – alongside the Presidency Council – via the LPDF. This creates the potential for a new period of administrative division and confusion. The challenge before the UN is now to snatch victory from the jaws of defeat by leveraging the pressure on Bashaga and Dbeibah to reach an agreement on expedited elections. But for this to avoid the failures of December there must also be agreement on the legal basis and the vetting criteria for candidates, in addition to an interim solution over who governs in the meantime.”

“There is little doubt that most of the impetus behind Aguila Salah’s manoeuvre to have the Parliament declaring the end of the government led by Abdelhamid Dbeibah and nominating the Misurata strongman Fathi Bashaga in his place is in the most significant part of Libyan origin. It is a plot devised by and elaborated within the upper echelons of the country’s post-Qaddafi political class. Nevertheless, given the evident necessity for each local actor to have the support of a powerful external ally to further enhance its chances of success, it would be ingenuous to think that there has been no interference or action/pressure from international actors. On the contrary, the novelty of this latest episode in recent Libyan history is that it has caused a reshuffle of the positions of these external actors. On the one hand, it is interesting to note that France and Qatar are the main countries supporting the Saleh, Haftar and Bashaga governments, along with Egypt, who seems more reluctant in making its support public. On the other, it may be more surprising that the UAE is the current leading supporter of Dbeibah along with the UN, the US, Italy, and the UK, whom is seemingly leaning further on fostering and finding an agreement between the opposing sides which would lead to a reshuffle of cabinet and set a fixed date for the holding of elections. The following few days will show how this complex situation will evolve.” 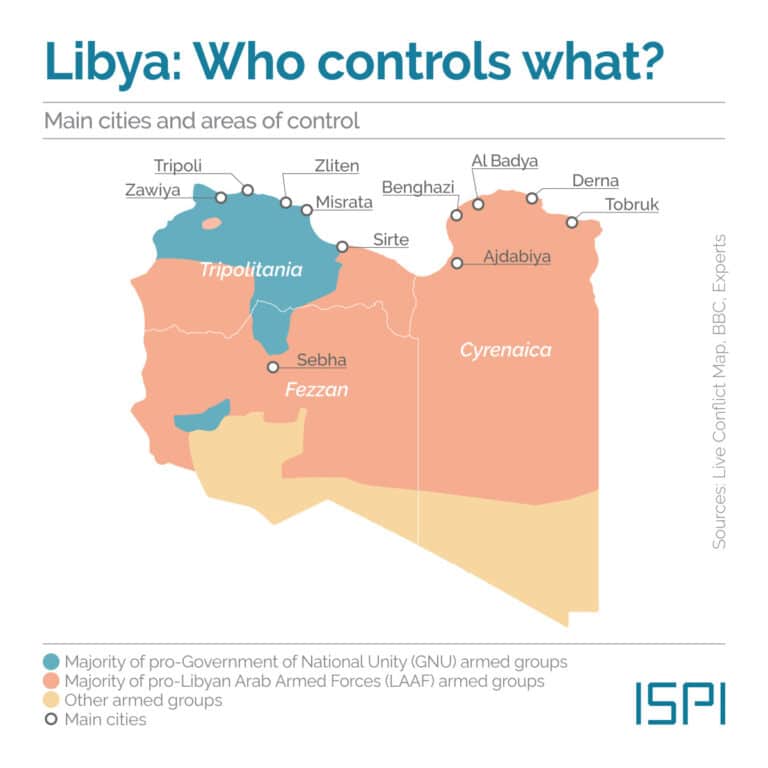