Lebanon: New Government in the Making

The MED This Week newsletter provides expert analysis and informed comments on the MENA region’s most significant issues and trends. Today, we focus on Lebanon, where Najib Miqati was just nominated Prime Minister-designate. On June 23, Lebanon’s caretaker Prime Minister Najib Miqati was appointed for a new term. This veteran politician will soon start the negotiations to

The MED This Week newsletter provides expert analysis and informed comments on the MENA region’s most significant issues and trends. Today, we focus on Lebanon, where Najib Miqati was just nominated Prime Minister-designate.

On June 23, Lebanon’s caretaker Prime Minister Najib Miqati was appointed for a new term. This veteran politician will soon start the negotiations to form a new government after the May 15 elections. Even though they may not have represented a watershed moment in the country’s history, these elections triggered new political developments. First, Hezbollah and its allies experienced a setback and lost their majority in parliament. Second, the polls were favourable for the Lebanese Forces, a right-wing party that based its campaign on an anti-Hezbollah rhetoric. Third, for the first time, opposition movements and the civil society were able to secure thirteen seats. These results may pave the way for further polarisation at the parliamentary level. In this complex political context, the next government will have to face the dire consequences of Lebanon’s economic crisis and address the challenges posed by the Ukraine war and the global rise in commodity prices. It will also have to carry on the negotiations with the IMF and work towards the reform of the banking and energy sectors. These tasks will require a titanic effort, and the presidential elections scheduled for this Autumn might become an additional cause of political instability. 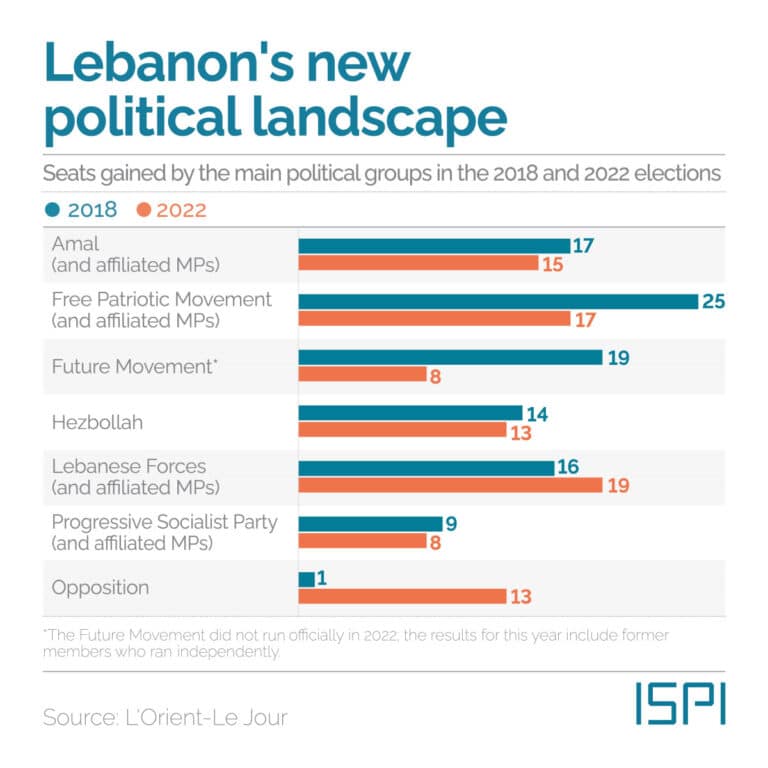 Experts from the ISPI MED network discuss Lebanon’s current political landscape and the prospects for the formation of a new government.

Hezbollah might have lost the majority, but not its strength

“A major result of the May 2022 elections in Lebanon is that the Hezbollah-led alliance lost its majority in parliament, and thereby its role as kingmaker. But Hezbollah is a savvy political actor and can still penetrate the complex Lebanese power-sharing system through informal channels to maintain its power. One example of this is provided by the re-election of Nabih Berri – leader of Amal and key Hezbollah’s ally – as speaker of parliament, despite the strong opposition from Hezbollah’s rivals. What this means is that Hezbollah and its allies still maintain ample margins of manoeuvre in Lebanese politics despite recent electoral results. Hezbollah is likely to use these channels to maintain political protection for its weapons, the pillar of its autonomous action within and outside Lebanon.”

Unable to form a coalition, the Lebanese Forces resort to passivity

“The Lebanese Forces, still trying to represent itself as an opposition force, is mostly disengaged in the post-election period. Its inability to build a large enough coalition in parliament meant it had limited chances of electing a Deputy Speaker of parliament or influencing the parliamentary committee elections. Instead, the party seems to have engaged in its conventional passivity by announcing it would not nominate or vote for any candidate for the Prime Minister position. In its vows to oppose any Hezbollah-aligned government and president, the Lebanese Forces has eased the way for Hezbollah, Amal, the Free Patriotic Union, and allies to secure a smooth, uncontested victory in parliamentary nominations and, likely, in government formation.”

The new opposition MPs can sow the seeds of political change

“Unfortunately, the parliamentary elections held on May 15 were not a critical juncture for Lebanon. At the moment, there are far too many structural obstacles keeping Lebanon in shambles. That said, the thirteen (or so) Members of Parliament who were active in the October revolution can sow the seeds of an anti-regime opposition. They can do this by trying to break old political cycles in three ways. First, these new MPs can have an impact on the political agenda and shape the debate on issues long forgotten in Lebanon such as accountability for war crimes, refugee protection, and gender equality. Second, they might engage with the citizens in a different way. Compared to the harsh exclusionary methods used by traditional parties, the new MPs can pave the way for a new era of transparency and citizens’ participation in policy-making. Third, they might use a different stance in regards to key public positions and nominations to government positions. They do not need to conform to the old ways that have enshrined sectarianism and corruption, but they can put forward a model of competence and merit-based appointments. Even though these elections did not mark a watershed moment for the country, they represented another attempt by the people to resist a corrupted political system. People in Lebanon are still struggling to survive. The new MPs have a role in bringing their suffering into parliament and taking the parliament out to the streets to address the people’s needs.”

The new government will face an uphill task

“The rise in global commodity prices caused by the pandemic and the Ukraine war is having a profound impact on Lebanon. Food and fuel prices are on the rise, and in May, the black market value of the Lebanese lira fell to a record-low at 37,700 against the US dollar. Even though the lira appreciated in the following weeks, this price increase, coupled with a financial meltdown and worsening humanitarian conditions, will have daunting consequences for the country. In this context, any new government will have a hard time mitigating the economic impact of the Ukraine war while addressing the root causes of Lebanon’s crisis. A new coalition will face the same challenges as the old one. On top of that, with the end of Michel Aoun’s mandate as President looming in the background, a new period of political paralysis might be just around the corner.”

“A recent survey conducted as part of a project I am leading at the American University of Beirut revealed that the vast majority of Lebanese households have become “energy poor”. In addition, 99% of these face a “severe energy burden”, which is defined by the American Council for an Energy-efficient Economy (ACEEE) as the case in which a household spends more than 10% of its income on energy. Not only is the energy crisis negatively impacting the Lebanese citizens’ quality of life, but even worse it constitutes the largest impediment to the recovery of major economic sectors such as manufacturing and agriculture. Having failed in managing and operating the electricity sector, the government has a duty to facilitate to the extent possible the adoption of renewable energy by households and the private sector, while endeavoring to privatise at least the generation and distribution sectors. Moreover, the recently passed Competition Law should prioritise addressing the fuel import cartel problem.”