The MED This Week newsletter provides expert analysis and informed insights on the most significant developments in the MENA region, bringing together unique opinions on the topic and reliable foresight on future scenarios. Today, we turn the spotlight on the UAE, where following the death of Sheikh Khalifa, Mohammed bin Zayed was appointed as the new

The MED This Week newsletter provides expert analysis and informed insights on the most significant developments in the MENA region, bringing together unique opinions on the topic and reliable foresight on future scenarios. Today, we turn the spotlight on the UAE, where following the death of Sheikh Khalifa, Mohammed bin Zayed was appointed as the new President.

On May 14, following the death of Sheikh Khalifa bin Zayed, Mohammed bin Zayed al-Nahyan was appointed as the new President of the United Arab Emirates (UAE). The eighteen-year-long presidency of Sheikh Khalifa was pivotal in ensuring the endurance of the young Emirati state and sustaining the country’s quest for economic diversification. However, after suffering a stroke in 2014, the late President stepped back from public life, leaving Mohammed bin Zayed as the UAE’s de facto ruler. For this reason, the smooth transition of power that is currently taking place is unlikely to bring substantial changes to the Emirates’ domestic and foreign policy. At the domestic level, Mohammed bin Zayed’s ascension to the presidency makes for an additional step toward the concentration of power domestically, in favour of Abu Dhabi. Moreover, the choice of the new Crown Prince that awaits bin Zayed will be critical, as the selection of a member of his inner family might lead to further centralisation. At the international level, the UAE will have to juggle a net of complex relations with its Western partners, Russia, and China, an issue further complexified by the outbreak of the ongoing war in Ukraine.

Experts from the ISPI MED network react to the consequences of Mohammed bin Zayed’s appointment as the new President of the UAE. 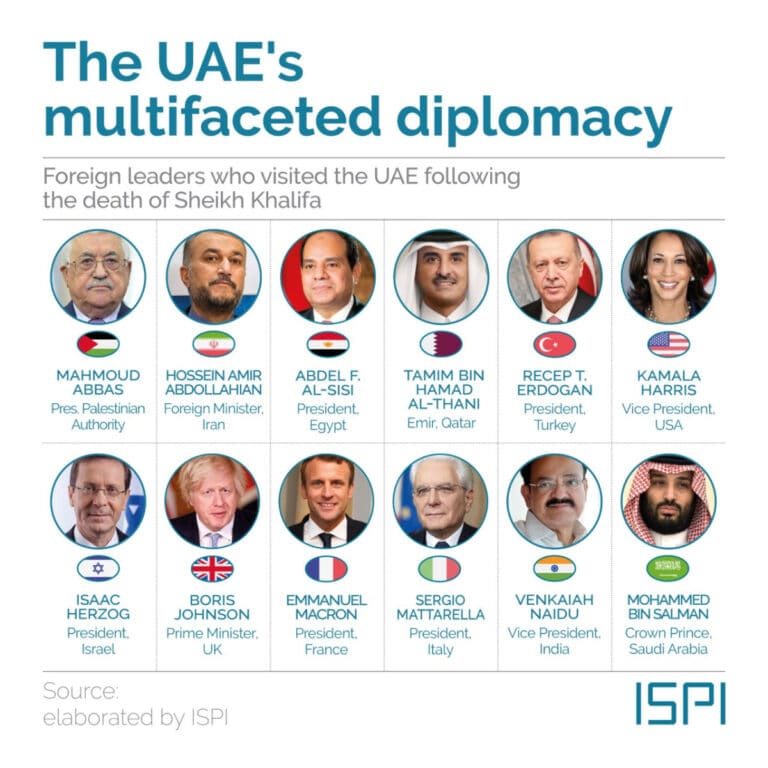 The legacy of Sheikh Khalifa

Sheikh Khalifa bin Zayed al-Nahyan, the eldest son of Sheikh Zayed (a founding figure of the UAE), helped to ensure the state’s political and economic longevity. While Sheikh Zayed played a pivotal role in bringing together the seven constituent emirates into a coherent national whole, Sheikh Khalifa ensured that this whole would be sustainable. To that end, he served as head of the Abu Dhabi Investment Authority, the sovereign wealth fund that his father had founded, and helped to oversee long-term investments, in addition to ordering the founding of Etihad Airlines to further aid economic diversification. On the political side, Sheikh Khalifa also oversaw the assistance provided to Dubai, with a contribution of $10 billion to the emirate in 2009 as it faced a debt crisis. Thus, economically and politically, Sheikh Khalifa was critically important to shoring up the sustainability of the UAE as a state; the swift and smooth transition of power to Sheikh Mohammed bin Zayed al-Nahyan testifies to how organized (and arguably centralized) the system has become.

A further step toward centralization in the UAE

The official appointment of Mohammed bin Zayed (MBZ) as President of the UAE is part of an ongoing centralization and de-federalization of power in the UAE, that has been going on for a decade. With Abu Dhabi having monopolized all power domains of the country, since the late 2000s, its disproportionate weight within the federation makes the federal supreme council’s vote for MBZ just a formality. The al-Nahyan are now truly moving from being just the royal family of Abu Dhabi to becoming the royal family of the UAE. The more surprising element in this transition will be how the question of succession within the royal family will be decided. Some of MBZ’s brothers such as Tahnoon bin Zayed have ambitions to become Crown Prince while MBZ has been grooming his son Khaled to take on powerful portfolios in the country.

Who is going to be the next Crown Prince?

Decision-makers in the United Arab Emirates (UAE) are not on a rush to choose a Crown Prince, but the ruling families of the seven Emirates are certainly having discussions about this appointment and considering a few options. The two clearest options would be to nominate MBZ’s son, Khaled bin Mohammed bin Zayed, or MBZ’s brother Tahnoon bin Zayed. Tahnoon bin Zayed is a prominent National Security Advisor and has been at the forefront of some Emirati policies domestically and, especially, in the wider MENA region. For this reason, Tahnoon bin Zayed is, rightly or wrongly, perceived regionally as less ideological and less hawkish than MBZ, and largely driven by security and realpolitik. Besides, selecting Khaled bin Mohammed would be a significant turn toward hyper-centralization of power in the hands of MBZ’s inner family. A compromise solution might lie in initially selecting a de jure and a de facto Crown Prince.

MBZ’s vision for the UAE in the region and beyond

Mohammed bin Zayed has already stamped his feature on politics, both inside the UAE and in the region. His ascension will only confirm his control over Emirati policy direction and deployment of its many tools – diplomatic, military, financial – to expand Emirati influence.

Just as Dubai was first in realizing the economic returns of becoming the regional hub for logistics and commerce, MBZ realized the strategic returns of becoming the regional hub for diplomacy and security. In doing so he has shifted the UAE’s ambitions from the Gulf to being a peninsular power with ties extending east to Asia and west to Africa. With this expanded vision has come new partnerships, often in defiance of traditional solidarities.

In the current period, the UAE has shifted its competitive focus from the military edge to the economic and strategic. Israel is central to this new game, providing technology and business opportunities, while serving as a bridge to new strategic groupings, such as the “I2-U2” Quad with the United States and India. Great power competition between the US, Russia and China seems to be the biggest obstacle to MBZ’s expansive ambitions which are built on global market connectivity within a multipolar world.

The challenges of a (new) multipolarism for the UAE

In the foreign policy realm, Mohammed bin Zayed’s presidency is expected to follow in the footsteps of his previous de facto leadership: ambitious strategies, nation-branding and global soft power, and diversified alliances. However, after the Russian invasion of Ukraine and its fallout, the international context has rapidly changed. This means the UAE’s post-oil economic model, based on trade and connectivity, has much to lose in a scenario marked by geopolitical blocs and sanctions. The UAE doesn’t want to take sides among global powers (US, China, Russia), as multipolarism has indirectly supported its national goals so far. For the Emiratis (and the Saudis), the only way to preserve its multiple alliances – without further upsetting the US – is to upgrade relationships with Washington. Surely, this is also the American interest: the high-level US delegation who travelled to Abu Dhabi to mourn the fallen president (Harris, Blinken, Austin, Burns) shows the conversation may have started.