Israel: No break to a political crisis

The MED This Week newsletter provides expert analysis and informed comments on the MENA region’s most significant issues and trends. Today, we focus on on the dismissal of Israel’s coalition government, zooming in on the country’s political crisis and external relations as it heads to new legislative elections. There seems to be no break to Israel’s political

The MED This Week newsletter provides expert analysis and informed comments on the MENA region’s most significant issues and trends. Today, we focus on on the dismissal of Israel’s coalition government, zooming in on the country’s political crisis and external relations as it heads to new legislative elections.

There seems to be no break to Israel’s political crisis. On June 30, the Knesset disbanded, following the announcement ten days ago of Prime Minister Naftali Bennett (leader of the right-wing Yamina party) and his coalition partner Yair Lapid (current Foreign Minister and head of the Yesh Atid party) of dissolving the legislative assembly. Such a decision comes after a troubled year in which the government has struggled to keep the majority coalition together and, most recently, began to lose votes on crucial bills. After several defections, Bennett and Lapid seem to have thrown in the towel: on November 1, Israelis will be called back to the polls for the fifth time in three and a half years. The crisis highlights a few key elements. Firstly, the two leaders emerge quite differently from it, with Lapid on the launch pad of an expected electoral success and Bennett on a declining trajectory. Secondly, the dismissal of the 1-year-old Bennett-Lapid executive somehow ends (in an unfortunate way) the very first governmental experience of the post-Netanyahu political era. The former Prime Minister, current head of the opposition and on trial for fraud and corruption, is best placed to be among the frontrunners of the next electoral phase. Furthermore, the domestic political crisis lies in a critical international conjuncture, where the war in Ukraine is reshuffling regional geopolitics and challenging stability across the area. The next electoral outcome could jeopardise many of the diplomatic successes achieved by Israel over the last year. Finally, on the intricate Eastern-Mediterranean file, the new government will have to find a balance between ambitions and reality. Longstanding regional disputes, for instance, need to be overtaken if Tel Aviv wants to boost energy cooperation and turn the area into a significant energy-exporting hub. 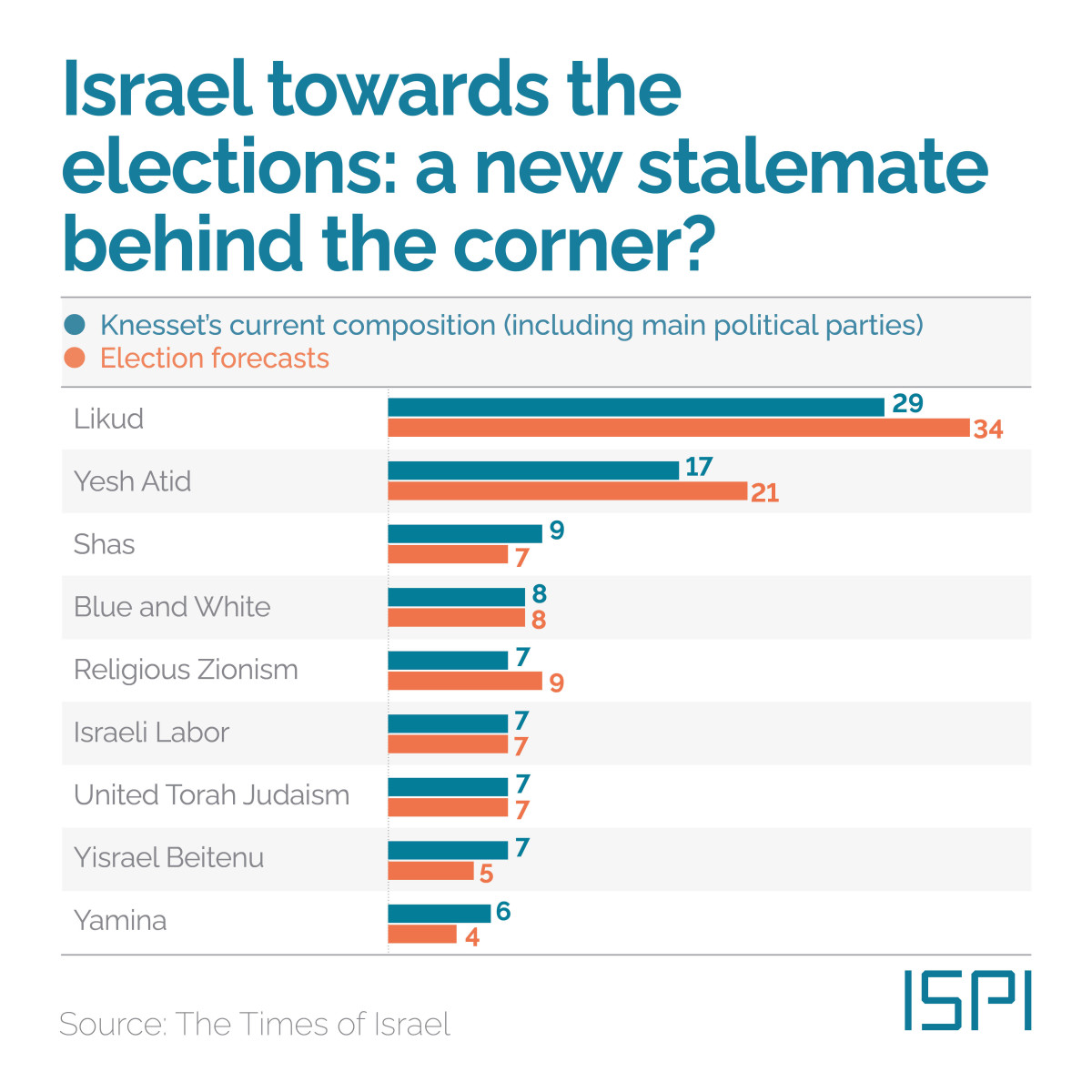 Experts from the ISPI MED network react to the latest political developments in Israel.

Same (old) government, different experiences: Bennett and Lapid in the aftermath of the Knesset dissolution

“Yair Lapid and Naftali Bennett emerge from the experience of the so-called “government of change” with two diametrically opposed perspectives. Lapid is preparing to become interim Prime Minister, whereas Bennett is rumored to be contemplating the option of a temporary withdrawal from the political scene. The polls conducted since the announcement of the dissolution of the Knesset reflect these dynamics by showing quite uniformly how Lapid is at the central stage of the electoral race, with his party Yesh Atid reconfirmed in second place and also growing from 17 MKs (obtained in 2021) to 20-22 seats. In contrast, Bennett’s Yamina party is down from 7 seats in the previous elections to the minimum 4 MKs required to enter the Knesset, accurately reflecting Bennett’s uncertain political future. Despite Lapid’s increased political status, the current electoral scenario confirms the return to a dreaded stalemate in the upcoming elections, which would not confer the 61 majority seats to either block.”

“Unquestionably, Bibi Netanyahu did anything to undermine the Bennett-Lapid’s frail majority at the Knesset. But, above all, such a plethoric government fell due to its political contradictions. It was assembled for a commendable reason: to free Israel from Netanyahu and pass a budget law needed to manage the state. That said, the issues on the Israeli agenda are even more compelling and confrontational for a right-center-left coalition. The Israeli electoral system will not give a single party the absolute majority (60+1 seats at the Knesset). Hardly would it guarantee a solid and stable coalition. However, this time Netanyahu could put together a strong enough alliance. Indeed, several ministers and deputies of the conservative side in the outgoing government could easily overcome their original anti-Bibi stand. Arithmetically, in the present Parliament, the right, the religious, the national-religious, and the settler parties already have a majority. Probably they will confirm this strength in the new election. Leaning right is a long-lasting and uninterrupted trend in Israel. If Netanyahu proves able to transform this theoretical majority into a political one, Israel will have the most rightist, religious and anti-Arab government since independence.”

Lapid may give new impulse to Israel’s diplomacy, but needs the backing of democratic leaders worldwide

“In its year in office, the Bennett-Lapid government has improved Israel’s foreign policy. It has fixed relations that Netanyahu deteriorated, taken normalization with Arab countries to new heights, drawn closer to the liberal democratic camp, and re-legitimized engagement with the Palestinian Authority (albeit without advancing the peace process). Much of this was due to Lapid’s work as Foreign Minister and to the comeback of the Ministry of Foreign Affairs after years of deliberate weakening by Netanyahu. Now, with Lapid assuming the role of Prime Minister in an interim government that will be in place for at least six months, positive diplomatic trends may continue. Lapid will indeed be in a more powerful position to advance his agenda. He will be highly motivated to deliver diplomatic successes as Prime Minister in the lead-up to the elections. Plus, he is likely to meet global leaders – including President Biden – also to consolidate his leadership status in the eyes of Israelis. In the short-run, the crisis may thus have a positive diplomatic impact, but uncertainty prevails in the long-run. Should Netanyahu form a government after the elections, negative diplomatic trends will resurface, coupled with new domestic challenges to democracy. Conversely, additional diplomatic opportunities will emerge if Lapid stays longer in office due to repeated elections or a new government including himself being formed. Netanyahu knew along the years how to utilize the international arena to his political benefit towards elections. Now it is Lapid’s turn to do so, and liberal democrats worldwide should help him succeed.”

Nimrod Goren, President of The Israeli Institute for Regional Foreign Policies (Mitvim) and Co-Founder of Diplomeds – The Council for Mediterranean Diplomacy

On the Palestinian track, the “government of change” has perpetuated the status quo

“When it comes to Palestinian rights, Israel’s so-called “government of change” has felt familiar. Given the ideological differences, its ruling parties have agreed to avoid new moves on the Palestinian track. In foregoing calls to formally annex the West Bank, right-wing members spoke of painful concessions for the coalition’s unity. But in reality, preserving the status quo has meant continuing the right-wing policies of previous Netanyahu governments, including promoting Israeli settlements and their residents at the expense of their Palestinian neighbours, who remain the targets of forcible displacement by Israel. Far from freezing the conflict, the government has enabled the entrenchment of a one-state reality of unequal rights and perpetual occupation — which leading human rights organisations have labelled apartheid. Whether under Netanyahu, Bennett, or Israel’s incoming Prime Minister Yair Lapid, this inequality has become a political constant in Israeli politics.”

Beyond internal instability: Israel must settle regional disputes in the East-Med region if it wants to open new export avenues

“Technical constraints and infrastructure bottlenecks make the recent EU-Israel-Egypt gas deal a rather modest addition to Europe’s gas needs, so it is not an economic or geopolitical game-changer in that sense. However, it is another step toward turning the East-Med into a gas exporting region in the long-run. Now that the EU has shown it is serious about purchasing the region’s gas, it incentivizes more cooperation between Israel and the countries of the East-Med to improve their cross-border infrastructure and allow for joint development and exports. The deal also makes the area far more attractive for energy companies to return and explore new potential gas fields. On its part, Israel must strive to settle longtime regional disputes that have hindered previous energy development and export opportunities. Chief among them is its maritime border dispute with Lebanon and its frayed relations with Turkey. By demonstrating willingness towards better regional collaboration, Israel can open new export avenues for the whole region.”