Israel: Bennett Between the Hammer and the Anvil

Israel is experiencing one of its deadliest wave of violence in years. On April 7th, an attack in central Tel Aviv claimed the lives of three people and wounded some ten others. The shooting was the latest in a series of lethal aggressions across Israel, carried out since March 22nd by both Arab citizens of Israel and Palestinians from the West

Israel is experiencing one of its deadliest wave of violence in years. On April 7th, an attack in central Tel Aviv claimed the lives of three people and wounded some ten others. The shooting was the latest in a series of lethal aggressions across Israel, carried out since March 22nd by both Arab citizens of Israel and Palestinians from the West Bank. Many factors appear to have contributed to such a surge of violence. The legitimation crisis of the Palestinian Authority and the recent developments in the process of Arab normalisation with Israel are part of the broader background. Beyond their deadly outcomes, the episodes do not fit easily within a common narrative. Even though all the perpetrators came from difficult socio-economic backgrounds marked by institutionalised discrimination, it seems that the assaults were organised by “lone wolves”. Overall, this deterioration in public security comes during a turbulent period for Israel’s politics. On the eve of the Tel Aviv shooting, the Bennett-Lapid government lost its majority at the Knesset. In an unexpected move, Idit Salman, a senior lawmaker from Bennett’s Yamina party, announced her resignation from the coalition. Salman’s decision was but the ultimate evidence of the pitfalls of the heterogeneous governing group that was formed to put an end to the premiership of Benjamin Netanyahu. While in the past year the Bennett-Lapid government has been able to reach some results at both the domestic and international levels, its mixed composition has always represented its main Achilles’ heel. Left with no majority, the executive might survive with the external support of some opposition members. Yet, the possibility of early elections might not be so unlikely. 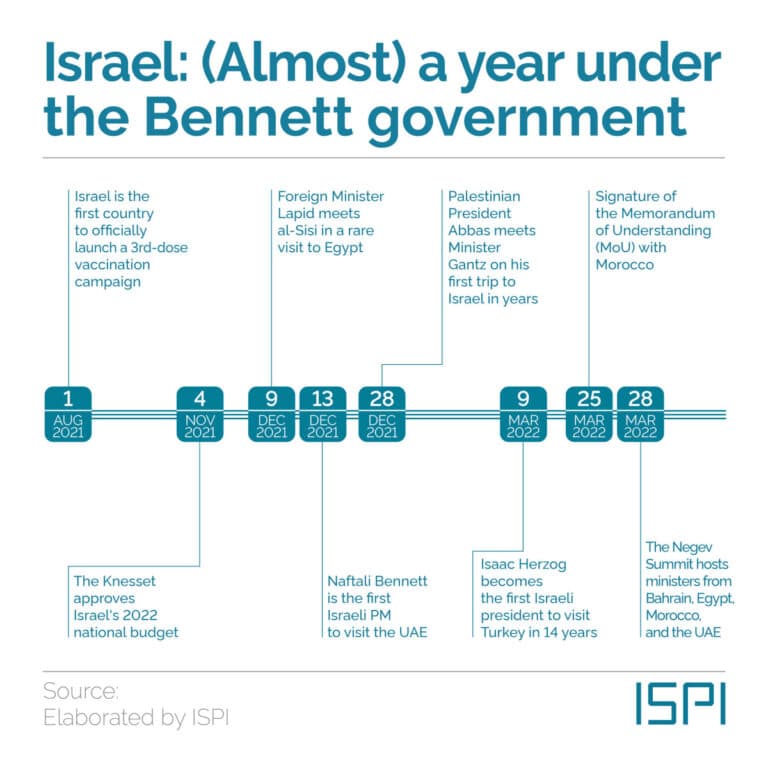 The experts of the ISPI MED network react to the political crisis and the security challenges Israel is currently facing.

The broader context behind the violent surge

“Recent Palestinian attacks in Israel appear individually motivated, without any top-down command, despite some links to ISIS and Fatah’s Al-Aqsa Martyrs Brigades. Nor is there any apparent connection between the attackers who come from different Palestinian communities: A Bedouin from Israel’s Negev, two Israeli citizens from Umm al-Fahm, and two Palestinians from the West Bank town of Jenin. However, these individuals were undoubtedly shaped by similar local dynamics, from poor socio-economic prospects to institutionalised discrimination and violence by the State of Israel (including Israeli settlers in the West Bank). This comes amidst growing national anger at the disappearance of any prospect for ending Israel’s decades-long occupation of Palestinian territory and rising religious emotions caused by Israeli actions in Jerusalem. Consequently, a majority of Palestinians now view armed confrontation as the best means of national liberation. A heavy-handed security response by Israel will do little to alter these drivers of violence.”

The post-Oslo PLO: “No longer a force in regional politics”

“At the very least, the Naqab Meeting between Lapid and the Foreign Ministers of Bahrain, Egypt, Morocco, and the UAE signalled to the Palestinians that they are not considered relevant by the regional players that attended. Indeed, not only were Palestinians not invited to participate – unsurprising given their objection to normalization – but their issues were not even discussed beyond a single comment from the Egyptian delegation, a major departure from decades of prioritizing the Palestinian cause in regional venues.

This growing irrelevance is partially the result of the PLO/PA gradually ceding, even squandering, its regional leverage over many years while becoming over-reliant on the peace process to deliver it a state. As a result of many factors, the post-Oslo PLO is simply no longer a force in regional politics.

While not directly connected to the Naqab Meeting, the recent violence in Palestine-Israel is likely the result of exasperation with the current state of affairs, including Arab-Israel normalization, but more importantly, ongoing Israeli repression, forcible expulsions, and colonization without any end in sight.”

“The countdown is on for early elections”

“The security deterioration in Israel is arriving at a delicate timing. In its first nine months, the Israeli government enjoyed a relative political calm and effectively dealt with multiple domestic and foreign affairs. The recent decision by MK Idit Silman to resign from the coalition marks a change of direction. The coalition lost its majority in parliament. While the government is not toppled and Netanyahu does not have an alternative government to form, the countdown is on for early elections. Prospects for long-term political stability, including the implementation of the Lapid-Bennett rotation agreement, seem slim now. The resumption of terror attacks puts pressure on Bennett, especially from the right-wing, in both the coalition and opposition, to respond militarily and adopt more right-wing policies. However, such responses might lead to unwanted Israeli-Palestinian escalation and increased divides within the coalition. The government should respond in the same professional and sensitive manner that helped it effectively address major challenges in recent months. It should not opt for escalation but rather find smart security solutions and leverage the new regional diplomatic reality in which Arab and Muslim leaders (including in the Palestinian Authority) clearly condemn the recent attacks and are ready to engage with the Israeli leadership.”

The Bennett-Lapid Government: A clay-footed giant?

“The crisis of the government was a matter of time. The single bond of such a politically redundant coalition was to put an end to the too dangerously long premiership of Benjamin Netanyahu. Hardly, the Bennett-Lapid government will find a new majority at the Knesset; hardly, another snap election would solve the problem. The stability of the Jewish state is based on three existential pillars: the economy, the Palestinians, and the domestic political landscape. The first one, is a remarkable success. On the other two, Israel cannot find an exit: not to live side by side with the Palestinians; not to reform the domestic political system. This decisional inability is not only dangerous for the lives of both the Israelis and the Palestinians. It is hazardous for the democracy in Israel. ‘Another democratic country is not what is needed’, recently stated at the Knesset a former Netanyahu’s minister, Miri Regev. ‘What we want here is the world’s only Jewish state’.”

“The resignation of Idit Silman left the government of Naftali Bennett without a majority and Benjamin Netanyahu still with only fifty-four seats, not allowing him to flip the balance of the current Knesset in his favour. The two blocks appear solid in their positions, leaving no room for a substantial shift of balance. Also, in the more probable case of early elections, the prospects for Netanyahu to become Prime Minister again would not significantly change.

In this political scenario, the turmoil of the recent wave of terror attacks is likely to incite momentum in Netanyahu’s attempt to overturn the government it is increasingly desperate to obtain, also in light of his judicial straits. By holding Bennett responsible for the security situation, Netanyahu is reinforcing a well-known fact in Israel: a government which is not perceived as hard-core right-wing, will constantly be undermined in the public eye when facing a wave of terrorism.”