Israel and the Gulf: A Security Partnership Around the Corner?

The MED This Week newsletter provides expert analysis and informed insights on the most significant developments in the MENA region, bringing together unique opinions on the topic and reliable foresight on future scenarios. Today we focus on the broadening technological and military partnership between Israel and the Arab Gulf States. A year and a half after

The MED This Week newsletter provides expert analysis and informed insights on the most significant developments in the MENA region, bringing together unique opinions on the topic and reliable foresight on future scenarios. Today we focus on the broadening technological and military partnership between Israel and the Arab Gulf States.

A year and a half after signing the Abraham Accords, Israel, Bahrain and United Arab Emirates are now working to further develop their economic and military ties. Over the past eighteen months, Israel has significantly expanded its trade relations with the UAE and Bahrain, while also enhancing the cooperation in the military technology and cybersecurity sectors. Over the last weeks, this process has accelerated. At the beginning of February, Israeli Defence Minister Benny Gantz signed a security agreement with Bahrain. Being the first of its kind to be signed with a Gulf state, this agreement aims at strengthening cooperation between the two countries in the intelligence and defence sectors. In the very days of Gantz’s visit to Bahrain, Israel took part in a US-led naval exercise across the Red Sea, the North Indian Ocean, and the Gulf. For the first time, the Israeli Navy sailed along Saudi and Omani ships, despite the lack of official diplomatic ties. Overall, these events signal Israel’s intention to lay the groundwork for a new strategic alliance in the region. As the US redefines its engagement in the area, it is difficult to gauge if and to what extent a new security system in the Gulf is in sight. It remains to be seen if such a development may potentially lead to future tensions with Iran.

“The UAE and Bahrain are turning into Israel’s gate to enter the Gulf: a door placed just in front of Iran. Now that pro-Iranian armed actors are escalating asymmetric attacks against the GCC region, from Yemen, Iraq and in the Red Sea, Abu Dhabi, Manama, and Tel Aviv have all shown aligned security concerns. These are also shared by Saudi Arabia: threats to maritime security (namely water-borne improvised explosive devices and sea mines); the proliferation of ballistic missiles and armed drones; the fight against smuggling; terrorism; and piracy activities. Riyadh has a strong, although sometimes dialectic, partnership with the UAE, plus an informal geopolitical convergence with Israel. This means that the Saudis are formally out of the “Abraham Accords”, but that they are part of the “Abraham-based” security equation of the Mediterranean-Red Sea-Bab el Mandeb route since many of the “Vision 2030” related projects involve the Saudi Western coast.”

“The main drivers contributing to the cooperation between Israel and the United Arab Emirates (UAE) in the field of military technology stem from the shared threats the countries currently face from Iran and its proxies.

Both sides face a serious and immediate threat from the unprecedented regional proliferation of surface-to-surface missiles and drones. This shared threat provides both sides with a unique opportunity to deepen security relations.

The UAE can gain a greater access to Israeli missile defence technology, while Israel can gain operational knowledge on how its enemies operate. However, deepening this cooperation between Jerusalem and Abu-Dhabi might also bring Iran to increase its threats towards Abu-Dhabi in order to drive a wedge between Israel and the UAE.”

“Due to shared fears of Iran’s ongoing cyber warfare capabilities and mutual anxiety over the current US-China cold war, certain Gulf states are more inclined to partner with Israel on technology and cyber. For instance, the UAE and Israel have found synergies in these domains. With Israeli aid, the UAE will be able to successfully pivot to deep-tech in areas including cloud computing, blockchain, and artificial intelligence (AI). Abu Dhabi and Dubai are gateway markets for Israeli technologies and offer financing sources for capital-intensive industries. The Emirates thus act as launch pad for both Israeli exports and partnerships throughout the region. However, the deepening cyber cooperation between Israel and the UAE may further trigger Iran to respond in a hawkish fashion and increase tensions across the Arabian Gulf.”

“The increased coordination between Israel and the Arab Gulf states in the realm of maritime security reflects an overall realignment of these states in a partnership intended to counter Iran. Such efforts are encouraged by the United States, as evidenced by the instrumental role played by the US in enabling the Abraham Accords, which helped set in motion additional forms of cooperation between Israel and Gulf states that have not (yet) normalized relations. The recent naval exercise between Israel, the US, and Oman reflects this overall trend: Sultan Haitham of Oman is eager to reassert Oman’s importance to the US, which Gulf states increasingly do by partnering with Israel. This occurred despite Oman’s functional relationship with Iran.”

Sowing seeds of discord with Tehran

“The Arab-Israeli normalization bears mixed implications for the Persian Gulf’s security environment. Normalization is a critical requirement for regional economic integration and social stability. But on the security front, its implications are ambiguous. Increasing Israeli security ties with Bahrain and UAE, such as cooperation on missile defense, raise speculation that Israel aims to fill the vacuum of the US gradual disengagement and acts as the Gulf states’ security guarantor. For now, Tehran does not perceive an immediate threat from these developments. However, if the normalization evolves into a solid anti-Iranian security alliance, it will be counterproductive for regional security. It motivates Tehran to launch measures to balance the alliance, such as more offensive capabilities to penetrate missile shields and export them to regional clients. A dynamic that builds new fault lines can become the core of future frictions while minimizing hopes for the emergence of a cooperative security system in the region.”

When it comes to security, Washington is still the key partner for Gulf States

“Much has been done – and rightly so – regarding closer security cooperation between Israel and key Gulf countries, especially with Bahrain. Israeli Defense Minister Benny Gantz recently signed with Manama a bilateral security accord and there has also been credible reporting that the Emirates are likely to purchase Israeli air defense systems. Recent attacks from Houthi missiles against the UAE have given these reports greater urgency. First, there has been an ongoing intelligence and security cooperation between Israel and the Gulf in recent years, largely in response to common concerns about Iran. What is new is the overt nature of these new security ventures.

Second, concern about America’s retrenchment from the region – or at least deprioritizing the Middle East – has pushed Israel and these Arab countries closer together. Still, as the recent use of the THAAD missile system in UAE against Houthis strikes attests, the US will remain the key partner for Gulf States when it comes to arms sales and security commitments. Finally, given the Gulf states’ proximity and vulnerability to Iran, none can afford to become the tip of the American – let alone Israeli – spear against Iran. Some will be especially attentive to balancing their ties with Israel and Iran. This is especially the case with the Emirates, which has shared profound energy and commercial ties to Iran.” 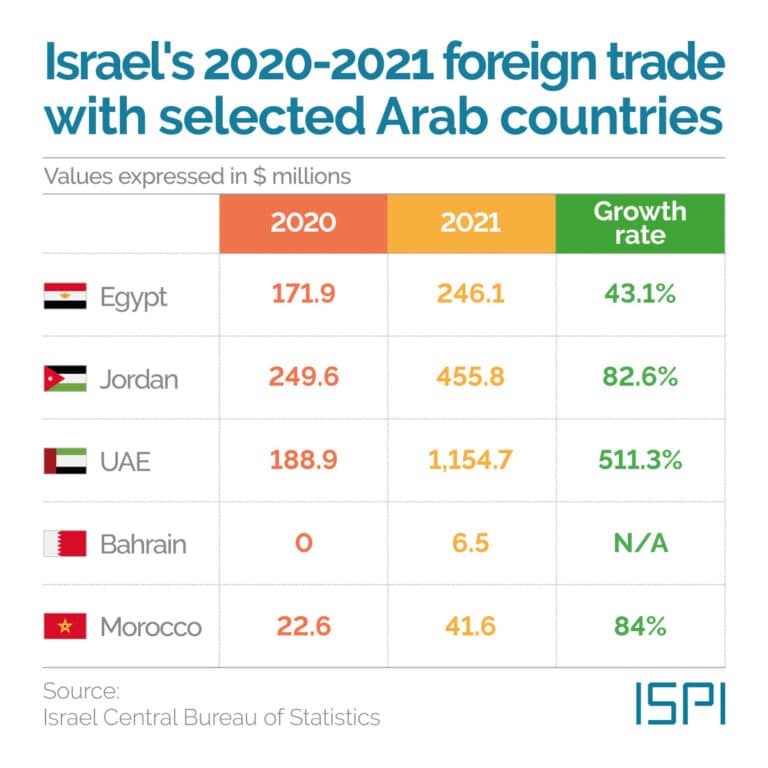