Iran, Russia and the JCPOA: Is a year of negotiations at risk?

The MED This Week newsletter provides expert analysis and informed insights on the most significant developments in the MENA region, bringing together unique opinions on the topic and reliable foresight on future scenarios. Today, we turn the spotlight on the Iran nuclear talks, focusing on the consequences of the last-minute requests raised by Russia in this

The MED This Week newsletter provides expert analysis and informed insights on the most significant developments in the MENA region, bringing together unique opinions on the topic and reliable foresight on future scenarios. Today, we turn the spotlight on the Iran nuclear talks, focusing on the consequences of the last-minute requests raised by Russia in this crucial moment of the negotiations.

The implications of the war in Ukraine go well beyond Europe. In the Middle East, the Iran nuclear talks may suffer from the confrontation between Russia and Ukraine. After eleven months, the talks to revive the 2015 nuclear deal were challenged by a last-minute Russian demand. In an unexpected move, the Kremlin requested sweeping guarantees that its trade with Iran would not be affected by the sanctions imposed in the aftermath of the Ukraine invasion. Although a few issues remained to be addressed, a new agreement seemed to be just around the corner. By connecting the Iran deal with the Ukraine war, the Russian government risked casting a shadow over the negotiations. The US and its European allies opposed Russian requests, and the talks were suspended until further notice. This development was met with caution by Tehran, and Iranian Foreign Minister, Hossein Amir-Abdollahian, visited Moscow to find a possible way out. The situation remains unclear, but Abdollahian’s visit seems to have brought some positive results, with the Russian Foreign Minister, Sergej Lavrov, declaring that the Kremlin has received “written guarantees” by Washington for its demands. At this stage, all actors involved seem to be interested in a swift resumption of the talks. The lifting of the sanctions on Iran would give momentum to its battered economy, and the resumption of Iranian oil exports could contribute to alleviating the dire consequences of the global energy crisis. 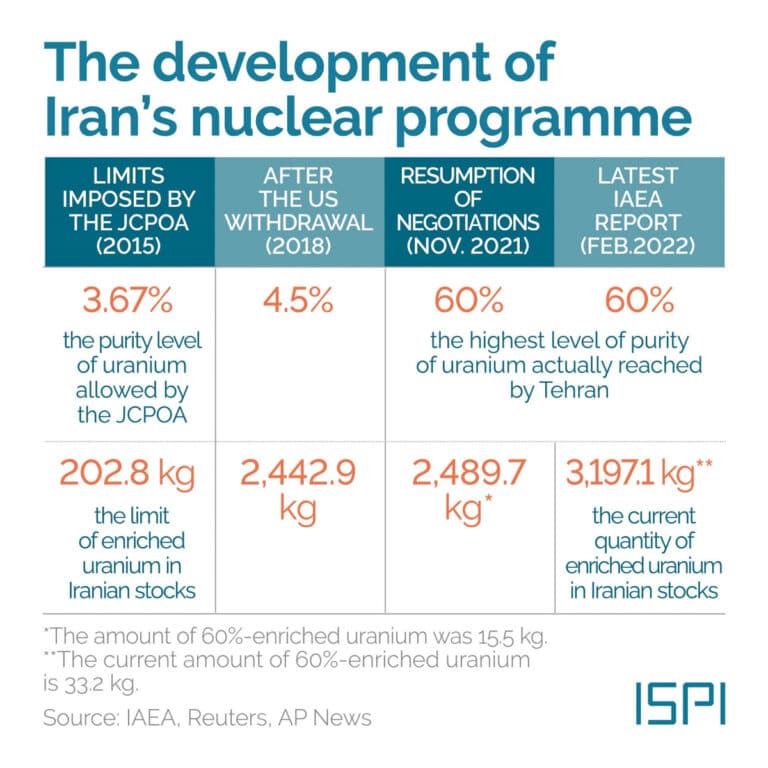 The experts of the ISPI MED network react to the latest developments in the Iran nuclear talks.

Moscow’s commitment on the JCPOA has not changed

“Despite the escalation of the Russian-Ukrainian conflict, Moscow’s position on restoring the JCPOA has not changed. Initially, the written guarantees requested by Russia were aimed at protecting trade, economic, investment and military ties with Iran from the sanctions strike. But faced with a wave of criticism, Moscow adjusted its claims. After a meeting with his Iranian counterpart, Russia’s Foreign Minister, Sergey Lavrov, confirmed that guarantees were included in the text of the future agreement, but now they have been narrowed down to cooperation on the Bushehr nuclear power plant. And this requirement is much easier to justify since there is a threat that the Russian state company Rosatom, which is building a second power unit and supplying fuel for nuclear power plants, will be included in the sanctions lists. If the demands made at the last moment were blackmail, then apparently this scenario was quickly replayed. It is much more important for Russia to save face and maintain constructive ties with Iran that may be useful in the future than to resort to a dubious way of circumventing economic pressures.”

Washington “reassures” Moscow, trying to save the day

“The latest news from Moscow suggests that the Russians have dropped an eleventh-hour attempt to load new conditions onto a revived Iran nuclear deal. According to Iranian Foreign Minister Hossein Amir-Abollahian, Russian Foreign Minister Sergei Lavrov “reassured” his Iranian counterpart on March 15 that Russia “remains on board for the final agreement in Vienna” that will bring the moribund 2015 agreement back to life. Russia had tried to squeeze trade concessions that go beyond the deal but appears to have settled for US waivers enabling it to take excess enriched uranium and provide other civilian technical cooperation necessary to get Iran back into compliance. With this wrinkle smoothed, the way appears clear for the US and Iran to resolve final differences over sanctions relief and sequencing. At a time when the world is convulsed with dismay over the ongoing Russian carnage in Ukraine, it is a relief that Moscow still is capable of constructive diplomacy with Iran.”

“A nuclear deal with Iran can increase Iran’s crude exports. Despite the sanctions, Iran has been exporting more than one million barrels per day (mb/d), mainly to China (via countries like Kuwait and Iraq to circumvent sanctions). Russia, the second-largest exporter of oil, exports around five mb/d. Russia, the second-largest exporter of oil, exports around five million barrels per day (mb/d). Russian oil comprises about 60% of European oil imports and around 8% of US imports. Iran, along with Venezuela, has the potential partly to offset the loss of Russian oil. The country has the potential to increase its production by half a million over the next six months, in order to reach an export level of 2.5 mb/d. The successful conclusion of the nuclear talks would therefore have a slow impact on global oil markets as it can, within 12 months, offset about 20% of Russian oil export. It is also important to note that Iranian crude is more likely to be destined to China than to the European refineries, due to the existing political ties between Tehran and Beijing.”

For E3 its a pause, not a stop

“The E3 are essential stakeholders and supporters of the JCPOA talks who are deeply invested in restoring the JCPOA and reversing Iran’s nuclear progress. Despite significant progress made in closing gaps between all sides – like Washington, the E3 was caught off guard by the spill over effects from the war in Ukraine and the Russian demand for written guarantees. The pause in negotiations is designed to give all parties time to strategize and develop solutions that could offset the collapse of negotiations. The bloc is deeply concerned that without new workarounds and a final push to save the deal, E3 security will be compromised by a nuclear crisis and a broader regional one that will draw in regional states from Israel to the GCC.”

Can Iran meet the IAEA deadline?

“Cooperation between Iran and the International Atomic Energy Agency (IAEA) is likely to progress — with no major breakthroughs — until all hope for the JCPOA’s revival is lost. Moscow’s last-second demand for guarantees exempting it from Ukraine-related sanctions that would constrain its trade with Iran has thrown a spanner in the gears of the JCPOA talks. Consequently, the United States has given Moscow a week to withdraw its sanctions demands before seeking an alternative arrangement that bypasses Russia. This timeline bumps with the March 20 deadline for Iran to provide written explanations to IAEA queries about undeclared nuclear material. Tehran is unlikely to sink the floundering talks by reneging on the Joint Statement. Still, the IAEA is also flying blind as it is unable to retrieve surveillance data being stored on its cameras at Iran’s nuclear facilities. Retrieving this data and resolving the outstanding safeguards disputes is likely contingent on reviving the nuclear deal.”