Iran: No End to Mounting Protests

The MED This Week newsletter provides expert analysis and informed comments on the MENA region’s most significant issues and trends. Today, we focus on Iran, where a month of public protests over a cut in government subsidies on essential goods poses a new challenge to the Raisi administration. Iran is experiencing a new wave of popular dissent.

The MED This Week newsletter provides expert analysis and informed comments on the MENA region’s most significant issues and trends. Today, we focus on Iran, where a month of public protests over a cut in government subsidies on essential goods poses a new challenge to the Raisi administration.

Iran is experiencing a new wave of popular dissent. Over the last few weeks, Iranians have taken to the streets to protest the government’s latest cut in subsidies on essential goods, as well as the subsided USD exchange rate of 42,000 rials per US dollar applied to ‘vital goods’ imports, such as medicines, meat, and wheat. Demonstrations have spread to several cities, mostly in the southwestern Khuzestan province (where a building collapse in Abadan in late May further angered the population) and faced severe repression from security forces. Hoping to minimize the political backlash over the subsidy reforms, President Ebrahim Raisi announced a new cash transfer programme (based on different income brackets) to compensate Iranian citizens. However, this provision may not be sufficient to offset goods and services’ increased prices. The latest wave of unrest is indeed symptomatic of growing public frustration with the woes of the Iranian economy, which is grappling with rampant inflation exacerbated by the national currency’s steady weakening. Despite recent economic policies by the Raisi administration, the Islamic Republic’s macroeconomic conditions are not likely to improve significantly if the US’ harsh sanctions are not loosened —an unlikely scenario for the time being. In addition, failures to mitigate the socio-economic consequences of environmental changes have far-reaching implications for the country. The Khuzestan region, increasingly affected by sandstorms and water shortages, epitomises such challenges. If Teheran fails to address these issues, there may be no end in sight to mounting protests. 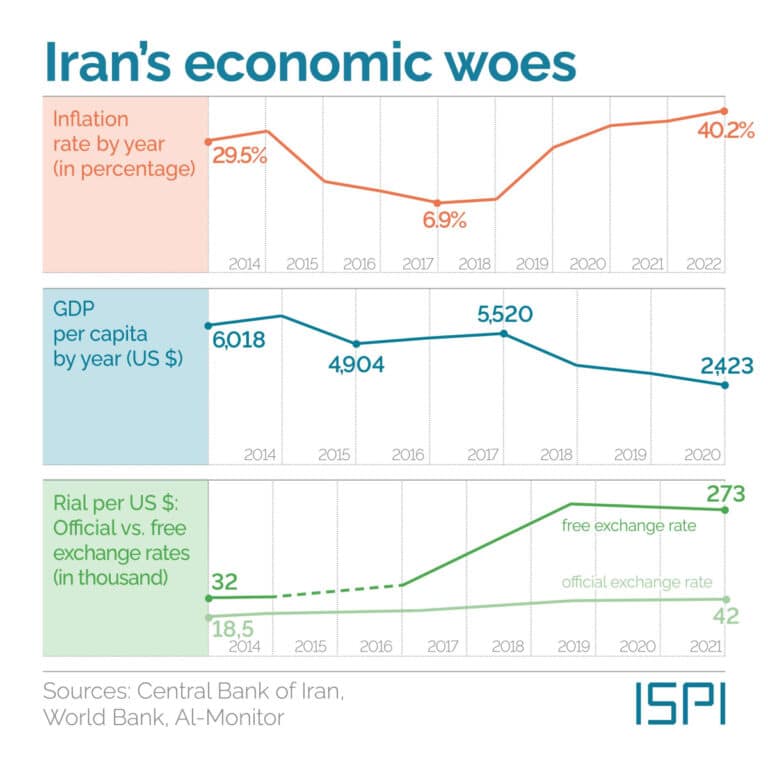 Experts from the ISPI MED network react to Iran’s cuts in subsidies and the ensuing wave of national dissent.

Tehran must not underestimate the psychological impact of the protests

“Various forms of protests have become a daily phenomenon in Iran, with the vast majority of sit-ins, strikes, and public gatherings remaining peaceful. However, given the constantly increasing socioeconomic hardship the Iranian population has to endure, one big trigger alone – such as the rise in food prices or a building’s collapse – has the potential to turn some of these protests into social unrest. Iran’s security forces are not well-trained in de-escalating angry protests but instead conduct harsh crackdowns with the aim of clearing the streets. Simultaneously, officials fail to address the people’s grievances in a meaningful and credible manner. This only exacerbates the level of anger and frustration among protesters, leading then to prolonged upheaval. While the scope of these protests remains limited and the state apparatus maintains uncontested control, the psychological and economic impact of small-scale protests should not be underestimated. Casualties, injuries, and arrests cause long-lasting strains among dozens of families. Internet shutdowns lead to massive harm to the significantly online-based economy of the country. This is a phenomenon hardly exclusive to Iran, and yet the political establishment has to develop conducive ways to be responsive to publicly voiced grievances if it wants these protests to stop.”

Adnan Tabatabai,Co- Founder and CEO, Center for Applied Research in Partnership with the Orient (CARPO)

The geography of protests: Why Khuzestan matters

“As someone growing up as a little kid in Khuzestan during the Iraq-Iran War, I’m fully aware of the province’s long-standing grievances rooted in massive socio-economic, political, and ecological neglect by the Islamic Republic. This existential “triple crisis” is nowhere more condensed, stark, and explosive than in Khuzestan, which has become the heart of Iran’s radical protest waves over the last few years. Because of the province’s oil wealth, any street protests can easily amount to a regime security issue for Tehran, hence the iron fist deployed there. This can lead to a dangerous vicious cycle in the future whereby growing public anger further fuels the regime’s reliance on repression.”

The many shades of an economic crisis

“The government has recently announced plans for new subsidy reforms aimed at cutting some food subsidies and substituting theme with targeted cash handouts meant to assist only Iranian citizens in need of the government’s financial assistance. Considering already high inflation figures that stood at about 40% in the month prior to this announcement, the public reaction to the government plan has been sporadic peaceful protests, which the government has unsurprisingly used violence to control. Despite his commitment to support the poor and underprivileged, President Raisi has decided to perform a “painful economic surgery” (as various officials refer to it) to cut down the government budget deficit. With the fading prospect of a nuclear deal, it seems that the government is preparing for lasting sanctions, continued low hydrocarbon export revenues, further currency depreciation, and higher inflation —a combination bound to spark more unrest across the country.”

Should protests persuade Teheran to come to terms with Washington?

“Iran is losing $4-5 billion a month in potential oil revenues as well as access to $100 billion in frozen funds by not finalizing an agreement with the United States on a mutual return to compliance with the JCPOA. That money could clearly help alleviate the current economic situation by strengthening the rial and dampening inflation. However, the Raisi government seems to have a tough time accepting a return to the deal without extracting some concessions not available to its predecessor. I worry that the current protests will make the government even less willing to compromise for fear of looking weak. The US, so far, is standing firm on its position to not lift the Foreign Terrorist Organization designation of the Islamic Revolutionary Guards Corps without a commensurate non-nuclear gesture from Iran. Rob Malley, the US Iran envoy, told the Senate on May the 25th that the prospects for an agreement are ‘tenuous.’ Perhaps there can be progress after the next meeting of the IAEA Board of Governors in early June, but I am not holding my breath.”

Do not forget the unrest-climate nexus

“Climate change has been a catalyst for Iran’s existing environmental challenges, including drought and extreme weather events such as sandstorms and floods. The socio-economic implications of climate change have been frequently called out through protests and social unrest events, including the latest wave of protests witnessed in the Khuzestan province amid severe water shortages and electricity blackouts. Despite ongoing challenges, the climate issue has been low on the agenda among Iran officials, who instead prioritize improving the country’s economic conditions amid US sanctions. In fact, although it submitted an Intended Nationally Determined Contributions to the United Nations Framework Convention on Climate Change (UNFCC), Iran is among the few countries that signed yet failed to ratify the Paris Agreement, freeing itself from all legal obligations to the global climate treaty. Ratifying the Paris Agreement along with identifying and addressing climate risks in the country’s various economic sectors are the first steps for Iranian officials to mitigate the socio-economic implications of climate change.”