Iran Deal: From “Close to Revive” to “Close to Stalling”?

The MED This Week newsletter provides expert analysis and informed comments on the MENA region’s most significant issues and trends. Today, we place the spotlight upon Iran and the negotiations to revive the nuclear deal.     During the last weeks, cautious optimism has emerged over the possibility that an agreement upon the restoration of the Joint

The MED This Week newsletter provides expert analysis and informed comments on the MENA region’s most significant issues and trends. Today, we place the spotlight upon Iran and the negotiations to revive the nuclear deal.

During the last weeks, cautious optimism has emerged over the possibility that an agreement upon the restoration of the Joint Comprehensive Plan of Action (JCPOA), commonly known as the Iranian nuclear deal, could indeed be reached. After Washington’s 2018 unilateral withdrawal and the following reintroduction of sanctions against Iran, nuclear talks over the restoration of the 2015 deal had begun again in April 2021. This is not the first time the deal appears close to a revival. And it may not be the last. On August 8, a “final” draft of an agreement was produced by the European Union, which coordinates the talks, around which Tehran and Washington have been negotiating. Hopes have been held high for a rapid conclusion to the deal since then, however such hope has now seemingly receded. In recent news reports, the US state department spokesman, labelled Tehran’s latest response to the negotiations as being “not constructive”. On its side, Iran declared it is still waiting to receive an official response from Washington to its requests for specific guarantees and possible adjustments. Whilst waiting for the resolution upon the negotiations last sticking points and the lifting of sanctions, structural economic challenges are looming over the country’s future, and the prospect of oil exports’ resumption opens significant new scenarios for the energy market. 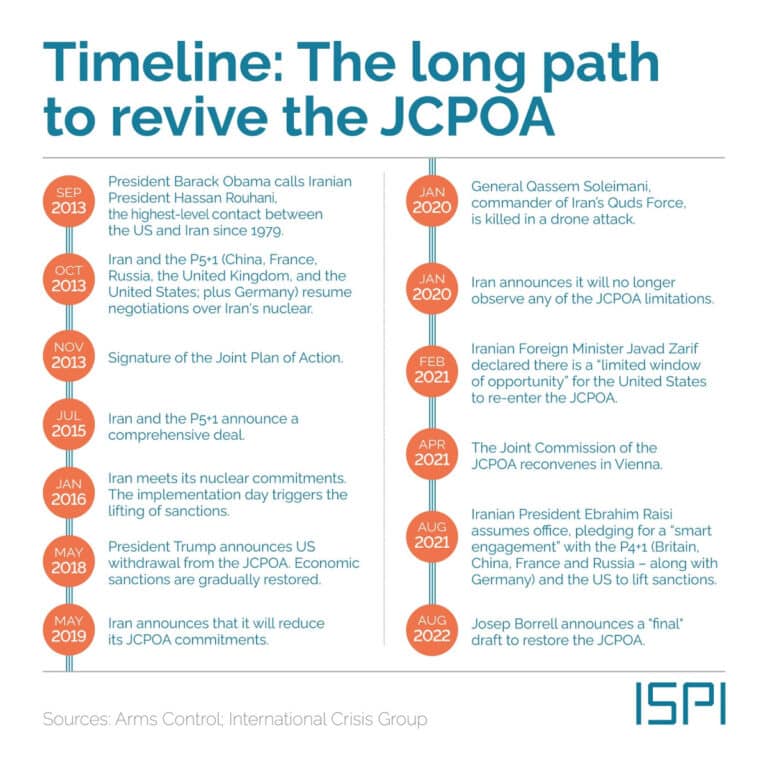 Experts from the ISPI MED network react to the latest developments at the negotiating table.

Negotiating between ups and downs

This has been a summer of ups and downs in the nuclear talks and unfortunately, the fate of the Joint Comprehensive Plan of Action remains uncertain as of this writing. Iran continues to make demands that are difficult if not impossible for Western countries to accept, such as requiring an end date for the IAEA investigation of unexplained traces of uranium found at three locations in Iran. Perhaps this is just a negotiating ploy; perhaps Iranian leaders are truly unwilling to return to compliance with the nuclear agreement and think the country can survive without it.  There remains no good alternative to diplomacy to try to contain the program. Meanwhile, the Iranian people, as usual, will bear the brunt of their government’s decisions.

Iran’s economic conditions have substantially deteriorated in recent years. This has prompted various episodes of demonstrations across the country. The government continuously blames nuclear related sanctions for the economic hardship, and responds to the popular dissent with extreme violence. Evidence indicates that years of structural economic problems have also contributed to the current difficulties. Moreover, frequent cases of fraud and embezzlement amongst senior government officials, that have been made public over the recent years, indicate a severe mismanagement of the economy, and raise public frustration. The income gap, low productivity, and economic uncertainty within Iran are far beyond the impact of the sanctions, and therefore, cannot be improved rapidly with the potential lift of such sanctions. Iran’s economic challenges will remain unresolved, regardless of a nuclear deal and the lifting of some sanctions, if the government fails to implement serious reform measures. Reforming the country’s banking and pension system, implementing transparency and good governance measures, promoting efficient economic competitiveness and productivity, are only a few examples of such reforms that are not linked to sanctions. Without such measures, should a nuclear deal be achieved, Iran’s economic hardship will not be eased.

Against the current geopolitical background, Iran remains a muted energy power which upon its return to the international markets could alter an existing volatile equilibrium. Indeed, the economic consequences of Iran’s return upon the global energy markets could have tremendous political implications amid the current Russia-Ukraine war and the West-Russia standoff. Notably, Iran’s foreign ministry’s spokesman has recently asserted that Iran’s vast gas reserves could “provide Europe’s energy needs if sanctions against it are lifted”. Whilst the arrival of its gas to the European thirsty markets could take years, Iran has both the willingness and the ability to cunningly play energy diplomacy. However, Teheran has limits too. On the ground, several infrastructural and technological limitations hamper its transformation into the EU gas lifeline. Upon the oil side, the OPEC-plus alliance has recently announced more cuts set from October to sustain prices closer to the $100 a barrel benchmark. Iran officials’ ambitions to refuse any set production quota, at least not until output reaches pre-sanctions levels, do nothing to grow the number of supporters for a nuclear deal among the OPEC-plus participants. In fact, the return of a free-rider Teheran would curb the oil producers’ structural power over the current market shape. Iran’s energy hand could be smartly played in supporting its return to the global energy markets. Instead, too smart of a hand would reduce any possibility for a widely supported deal.

Although a renewed nuclear deal will significantly impact Iran’s economy, in the short term, Tehran’s foreign policy would also likely adjust to the new scenario. The Raisi administration has centred much of its regional policy around the dialogue with the GCC countries, which have been remarkably responsive, signalling the desire to define a new modus vivendi in the Persian Gulf after the tensions between 2019-2021. It is plausible that the removal of US sanctions on Iran – especially those preventing Tehran’s oil exports – might further lubricate the regional dialogue. However, it is hard to expect that a return to the JCPOA will quickly result in substantial policy changes upon those issues and areas that have been at the core of Tehran’s foreign policy in past years (e.g., the missile programme, Syria, and Iraq). Similarly, the “Look East” policy will not lose priority, although the opportunity to attract European investments remains one of the primary rewards of the nuclear deal.

A proactive role for the European Union

The European Union, which has been officially in charge of coordinating negotiations to revive the Iran nuclear deal (JCPOA), has recently taken a more active role in mediating between Tehran and Washington. In this vein, the EU has proposed a “final text” for the agreement whilst increasing diplomatic pressure upon both Iran and the US to conclude the negotiations. The EU’s more active role has to do primarily with considerations pertaining to the war in Ukraine. On the one hand, Iran’s return to the global energy market could reduce the pressure upon Europe caused by Russia’s use of energy as a weapon. On the other hand, a revived JCPOA could prevent a new military conflict in Europe’s close neighbourhood – possibly between Iran and Israel. But beyond these considerations, if the European initiative leads to the revival of the deal, it can consolidate the EU’s role as a great diplomatic power capable of effectively resolving international crises.