From Washington to Tehran: Doha’s Diplomacy at Work

The MED This Week newsletter provides expert analysis and informed insights on the most significant developments in the MENA region, bringing together unique opinions on the topic and reliable foresight on future scenarios. Today, we focus on Qatar, whose recent vibrant diplomatic role has been emphasized by its involvement in a broad range of issues discussed

The MED This Week newsletter provides expert analysis and informed insights on the most significant developments in the MENA region, bringing together unique opinions on the topic and reliable foresight on future scenarios. Today, we focus on Qatar, whose recent vibrant diplomatic role has been emphasized by its involvement in a broad range of issues discussed during Sheikh Tamim’s visit to Washington, the first Gulf leader to meet Biden at the White House.

On January 31st, 2022, the Emir of Qatar, Sheikh Tamim bin Hamad Al Thani, visited Washington to meet with US President Joe Biden. In their first in-person meeting at the White House, the two leaders discussed a tight agenda of pressing global issues. In the short-term, the United States is seeking Doha’s support in supplying natural gas to its European allies that risk gas flow restrictions in the face of a potential Russian aggression against Ukraine. As the world’s second-largest exporter of liquefied natural gas (LNG), Qatar may prove essential in providing the EU – strongly dependent on Russian gas supplies – with new avenues for its energy needs. Topping the meeting’s agenda was also an attempt to find a way forward in Afghanistan, where the partnership with Doha has been central to many US vital interests. Finally, during the meeting in Washington, Biden announced his intention to designate Qatar as a Major Non-NATO Ally (MNNA), therefore recognising its important role in the Middle East and beyond for the US. This status, granted only to 17 other countries, will formally give Doha special economic and military privileges in its relationship with Washington and other Western allies. Officially, the Iranian nuclear deal was not amongst the issues discussed at the White House. Nonetheless, the recent visit the Qatari Foreign Minister paid to his Iranian counterpart in Tehran did raise speculations that Doha was playing an intermediary role between the two sides. Above all, these recent diplomatic efforts reflect Qatar’s new diplomatic activism and its attempts to defuse tensions in the Middle East. Regionally, Doha has further consolidated its ties with Turkey, while progressively restoring its relations with neighbouring Arab states (especially Saudi Arabia). With an eye on the FIFA World Cup it will host in November, Qatar is working on relaunching its image on the regional and international scene.

A “good friend and reliable partner” for Washington

“The bilateral relations between the United States and Qatar have reached new heights in the last couple of years. Qatar went from struggling to decipher where it stood with the Trump administration to being designated a Non-NATO Ally by President Biden. The Qatari leadership has managed to make itself resourceful as an integral international player, especially from the US perspective. Qatar has made itself indispensable in almost every Washington’s major foreign policy quest, from the withdrawal of Afghanistan to negotiations of the JCPOA and now the Ukraine crisis. Its brokering US-Taliban talks and facilitating evacuations of the US’s chaotic exit was its first redemption. Today, Qatar appears to foster shuttle diplomacy between Iran and the US, another sorely important agenda item for the Biden administration. And once again, as the world’s largest exporter of liquefied natural gas, Qatar has made itself vitally important in another critical juncture offering supplies to Europe in case of disruptions due to the tensions surrounding Ukraine.”

“Qatar’s unique position to serve the world’s largest LNG hungry markets – Asia and Europe – its formidable resources, export capacities and above-average carbon credentials make it a key point of attention in the current energy crisis. Yet, Qatar is not a philanthropist gas player: it hosts the gas exporting countries forum; it is a shareholder in Rosneft; and it has long term contracts to meet. However, it saved Asia once and can take five key steps to do it again: redirect excess volumes to Europe and produce at maximum; engage Russia on how its policies harm the role of gas in the energy transition; develop its new liquefaction and purification facilities (trains) on time; take leadership in cleaner gas with Carbon Capture and Storage (CCS) and large scale solar to power infrastructures; expand and deliver on the Global methane pledge. Overall, these achievements would potentially help Europe and the stability of global energy supplies.”

In Afghanistan, Qatar still acts as a messenger between the US and the Taliban

“Qatar managed to resume the first evacuation flight from Kabul after a break. It also continued its much-needed assistance to the Afghan people by creating an air bridge providing supplies, humanitarian aid and relief materials. Furthermore, Qatar is developing some sectors of the Afghan economy, supplying raw materials to the country and providing the needed skilled professionals. Qatar and Turkey have agreed to jointly operate five airports in Afghanistan.

Acting as a messenger between the US, its Western allies, and the Taliban, Qatar has become the US diplomatic representative in Afghanistan. The Qatari foreign minister concluded the first high-level visit to Kabul, and Doha will likely recognise the Taliban as Afghanistan’s interim government and help facilitate its recognition by some countries.”

Could Doha be the middleman between Iran and the US?

“Last week’s trip by the Qatari Foreign Minister to Iran is part of Doha’s persistent efforts to deescalate tensions between Tehran and Washington. Qatar has been adamantly trying to find a middle ground between Iran and the United States since President Joe Biden took office in January 2021. This week, Doha was engaged in shuttle diplomacy as the Emir travelled to Washington for his first visit with President Biden days after Al Thani visited Tehran. Undoubtedly, Iran was high on the agenda during the bilateral discussions, and it can be presumed that the Qatari delegation is relaying messages on behalf of both parties as a trusted intermediary.

One key difference between Qatar’s approach towards Iran from the Saudi and Emirati approaches, is that Doha never severed its relations with Tehran. The shared gas field in the Persian Gulf has inhibited a conflict, but the 2017 blockade that shifted the region’s geopolitics further pushed the two countries closer to one another. Today, Saudi Arabia and the United Arab Emirates have also chosen dialogue over conflict in perpetuity, and there have already been some positive developments from their diplomatic interactions with Tehran. Nevertheless, the Saudis and Emiratis are entangled in a regional rivalry for power with Iran, something that Qatar, Kuwait, and Oman, have all avoided based on the nature of their foreign policy and regional outlook.”

Lights and shadows of the Doha-GCC conundrum

“One year after Al-Ula, the promised reconciliation drive between Saudi Arabia and Qatar appears to be gathering pace. With a raft of proposed joint ventures, including green energy projects, investment funds, and railroads, their economies appear to be working towards a mutually beneficial union. Moreover, on the international stage, having settled their divisive World Trade Organization (WTO) broadcasting rights dispute and reined in their respective adversarial media campaigns against each other, they appear to be finally presenting the sort of united front the United States expects of two of its principal regional security partners. Questions linger, however, over the stance of other Al-Ula signatories. The UAE, most notably, has been cautious in its approach, seemingly less willing to bury the hatchet and remaining suspicious over Qatar’s alleged ties to the sorts of organizations it still sees as the principal threats to Gulf monarchical stability.”

The Ankara-Doha axis has never been more stable

“The alliance between Qatar and Turkey is among the most stable ones in the Middle East. Dating back to the early 2000s, it has strengthened over the years, especially after the 2011 Arab uprisings. Both ideology and pragmatism have brought the two countries closer. Indeed, their mutual support for political Islam in the region has gone hand in hand with common military and economic interests. While Doha counts on Ankara’s defence capabilities (a Turkish military base was built in Qatar in 2019), Ankara relies on Doha for economic and financial support. Qatar has invested billions of dollars in Turkey, and in 2020 it also signed a swap agreement worth $15 billion to support the country’s falling foreign reserves. Recently, their cooperation was expanded with the signature of 15 agreements in areas such as emergency response and civil defence, diplomacy, culture, healthcare, religious affairs, etc. These commitments have highlighted that the end of Qatar’s blockade and its renewed relations with Saudi Arabia, United Arab Emirates, Bahrain, and Egypt have not affected its relations with Turkey. They are likely to remain sound and stable, despite ongoing geopolitical transformations in the region.”

On re-engaging with Damascus, Qatar is waiting others to take the lead

“Qatar has to be extremely cautious regarding the re-integration of Syria under Assad into the Arab fold. Like other Arab states, Doha has strong interests related to Syria, which is a key Arab country. But given its strong ties to the Muslim Brotherhood movement and Sunni Islamists, and therefore a major supporter of the armed uprising against the regime — as well as its close alliance with Turkey, Qatar could anger close partners if it moves too quickly to restore ties or endorse the rehabilitation of the Assad regime. Expect Qatar to hold back if possible regarding Syria, therefore, letting other Gulf Arab countries like Oman and the UAE take the lead. Even Saudi Arabia is likely to re-engage with Damascus sooner. But eventually, Doha is likely to follow the lead of its partners, especially Turkey, on the status of Assad’s Syria, and restore ties.”

“The FIFA World Cup for Qatar has long represented a time to shine under the international spotlight. After a few years of embracing a more assertive and controversial regional geopolitics as the major patron of the Muslim Brotherhood, Doha has parted ways from its post-Arab Spring doctrine. Under the new Emir, Tamim bin Hamad Al Thani, and also as a reaction to the political boycott and economic embargo imposed upon it by its neighbours, Qatar has gone “back to the future”. Doha has reverted to a pragmatic and dynamic approach: relinquishing ideological banners, repairing ties regionally and serving as a mediator between problematic interlocutors, such as the Taliban or Iran, and global actors, such as the US or Europe. Still selling East but firmly looking West, Qatar remains eager to make itself a most useful ally to its Western partners and regional ally, Turkey. Amid this backdrop, Qatar’s FIFA World Cup is a perfect opportunity to re-launch its brand and lock down its new position, literally at the centre of international games.” 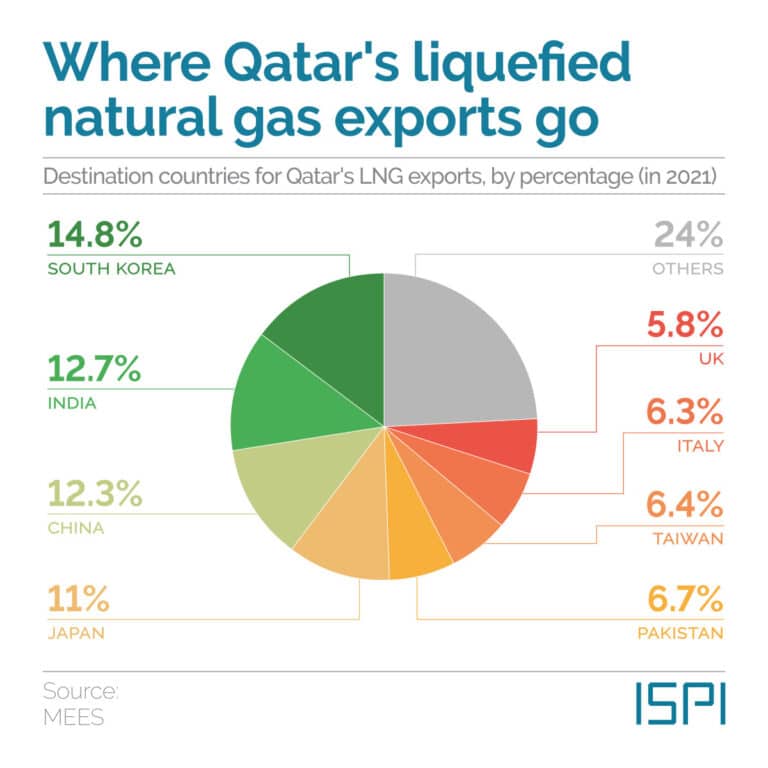