The MED This Week newsletter provides expert analysis and informed comments on the MENA region’s most significant issues and trends. Today we explore the potential emerging levels of energy interaction between European markets in search for non-Russian resources and countries of the Southern neighbourhood. Once again, looming energy shocks are threatening Europe. On August the 22nd, following

The MED This Week newsletter provides expert analysis and informed comments on the MENA region’s most significant issues and trends. Today we explore the potential emerging levels of energy interaction between European markets in search for non-Russian resources and countries of the Southern neighbourhood.

Once again, looming energy shocks are threatening Europe. On August the 22nd, following Gazprom’s announcement of a temporary shutdown of the North Stream 1 pipeline to Germany, the benchmark Dutch TTF gas price hit an intraday record of €295 per megawatt hour, a dramatic spike in natural gas prices. Two days later, Brent crude oil exceeded $100 per barrel after OPEC announced plans to reduce its production. A reflection of market volatility due to Russia’s invasion of Ukraine, the current energy situation complicates European efforts to bolster gas reserves for the incoming winter, crippling the EU’s industrial production and potentially pushing the region into recession. Europe’s urgent need to diversify its energy suppliers away from Russia could provide a golden opportunity for Middle Eastern and North African oil and gas producers to step in. Since the outbreak of the war, the region has become a natural destination for Europe in its growing quest for non-Russian energy resources, with leaders of the EU’s economic powers (Germany, France, Italy) repeatedly visiting producers such as Algeria, Saudi Arabia, the UAE and Qatar. In addition to energy cooperation, this search for diversification offers a valuable tool for enhancing bilateral partnerships and expanding EU-MENA relations in the long term. In return, these will be key preconditions for potential new levels of involvement, such as enhancing investment in renewables and hydrogen, creating low-carbon supply chains, and new infrastructure partnerships. At the same time, stronger ties tend to have consequences on many fronts beyond the economic field, including a greater European involvement in the complex geopolitics of the MENA region.

Experts from the ISPI MED network react to Europe’s latest energy challenges and the potential levels of cooperation with oil and gas producers in the MENA region. 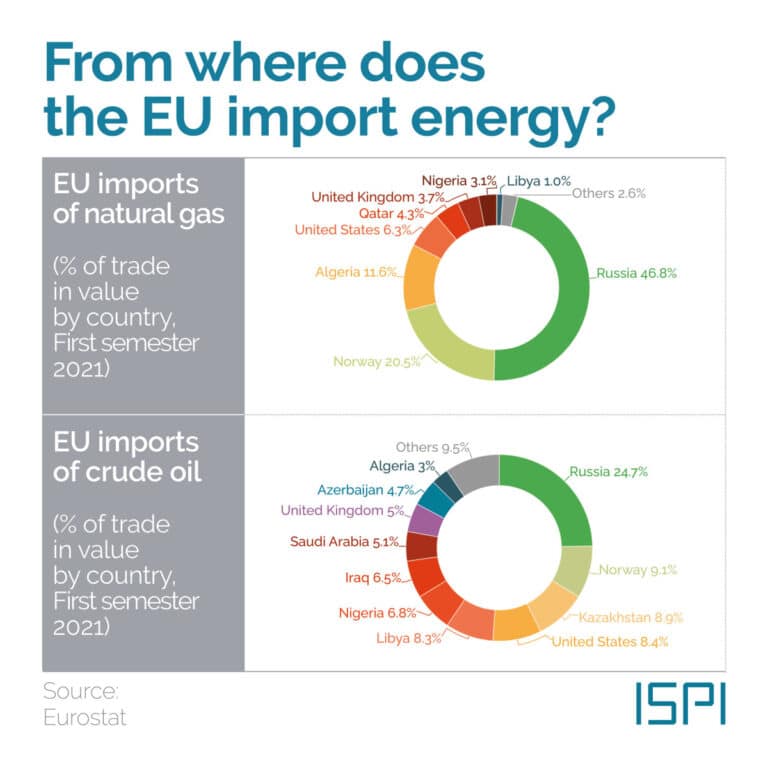 “This winter will be a difficult one for energy supply to Europe, though this is primarily concentrated in gas deliveries rather than oil. However, the anticipation of increased pressure and sanctions on Russian oil exports will continue to impact oil pricing. And while oil markets fluctuate based on considerations of Asian demand, Russian sanctions and the possible re-entry of Iranian exports, gas markets face a different set of variables. For Europe, more political risk is associated with disruptions of LNG deliveries and attacks on drilling infrastructure in the Eastern Mediterranean. The advent of more political risk to budding gas infrastructure in the East Mediterranean would signal a prolonged energy security threat to European supply sources, even before they have become firmly established as alternatives to Russian pipeline gas. On the other hand, new infrastructure partnerships in Europe with Gulf energy supplies are increasing, which could mean new trade and investment ties. The question is their longevity and different time horizons based on net zero targets in Europe.”

More gas wanted? There is little that Middle Eastern states can do about it

“The EU’s decision to end dependence upon Russian natural gas and curb imports of crude oil from Russia is an opportunity for the Middle Eastern and North African oil and gas producers to step in. While there is some spare oil production capacity, concentrated in Saudi Arabia and the United Arab Emirates, the same cannot be said for natural gas and LNG.

It will take time to build a new gas supply base and it will certainly not come in time to alleviate a potential shortage in Europe this winter should Russia continue to withhold pipeline gas deliveries. There is little the Middle Eastern producers can do now since most are currently producing at, or close to, maximum capacity. Top LNG exporter Qatar is locked into long-term contracts, mostly with Asia, and will not have surplus gas for export before 2025.

The revision in the EU’s energy policy is reshaping relations with the Gulf Arab states as energy security has become a priority for European leaders. It has also led to a reassessment of ties between the EU and the Gulf states as manifested by the ‘Strategic Partnership with the Gulf’ unveiled by the European Commission in May.”

In its drive for energy security, Gulf producers are natural destinations for Europe

“The higher oil and gas prices which we are seeing today (courtesy of the war in Ukraine) have generated record earnings for the Gulf’s national oil companies and subsequently massive windfalls to their governments. Saudi Aramco’s second-quarter earnings this year dwarf those recorded by its private Western peers. For the Gulf’s economies largely dependent on hydrocarbon revenues, the outlook for this year is easily among the brightest in the world.

The Gulf countries are sizeable oil and gas producers and exporters. It is therefore natural that energy-strapped Europe turns to the Middle East to replace dwindling Russian supplies. We are already seeing increasing oil (crude and products) exports from the region to Europe, especially from Saudi Arabia and Iraq. In terms of gas, Qatar, in particular, is seizing the opportunity to gain a more significant market share (and political weight) in an increasingly important market.

Stronger energy ties tend to have positive spillovers on many fronts, which are not limited to the economy, but can also include security and military cooperation as well as better aligned political agendas.”

“Over the last months, the urgent need to diversify natural gas suppliers and reduce energy dependence on Russia has become one of Italy’s top foreign policy priorities. Since the outbreak of the Ukraine conflict, Italian officials (often accompanied by the CEO of the energy group Eni) have multiplied their visits to major producing countries, such as Algeria, Qatar, Angola, and the Republic of the Congo. Additionally, Eni and the Egyptian group Egas signed an agreement to increase LNG exports to Europe. Even though additional supplies from the Southern neighbourhood could replace, at least in the short term, only a fraction of the energy production required by the country’s economy, the quest for diversification could prove a valuable tool to reinforce bilateral partnerships and economic relations in the long term. For instance, during the Fourth Algerian-Italian Intergovernmental Summit, held in July, the two countries signed upon 15 agreements and memorandums of understanding in different fields, such as energy transition, industrial and technological cooperation, infrastructures, pharmaceuticals, and startups.”

Renewable and Hydrogen: a gateway for EU-GCC cooperation

“The Gulf region has tremendous conditions for the production of blue and green hydrogen and its derivatives (e.g. ammonia). Although this will take several years, European companies are already important players in such emerging projects. Hydrogen will be key in replacing Europe’s current use of natural gas, but only from 2026. However, the Gulf countries don’t act on energy as a bloc. Momentum towards an EU-GCC free trade agreement has recently resumed after years of stasis. Still, green energy cooperation would largely have to be carried out on a country-by-country basis. The GCC states have differing strategies on hydrogen: Oman focuses upon green hydrogen; Saudi Arabia and the UAE on both green and blue; and Qatar has excellent potential for blue but has done very little with it. The EU should attempt to be technology-neutral in its approach to Gulf hydrogen and focus more upon cost, scale-up, technological improvement, and carbon neutrality via clear and logical rules. In renewables, GCC countries like Saudi Arabia, the UAE and Qatar are increasingly important investors outside their borders, including within Europe. There could be room for cooperation upon joint renewables projects, especially to alleviate the effects of high energy prices in developing countries. There is also potential to integrate the GCC into the EU’s emerging supply chains for critical materials and components, given its potential for low-carbon manufacturing of energy-intensive products.”

“If Europe should have learned anything from Russia’s war against Ukraine, it is undoubtedly that energy agreements are more than commercial transactions. Expanding energy-trading relations with Middle Eastern producers is essential as Europe seeks to wean itself off Russian hydrocarbons. Yet, in doing so, Europe also increases its stake in the highly complex geopolitics of the region – whether that is the fractious relations between the Gulf monarchies and Iran, the fragile security of maritime chokepoints like the Bab al-Mandeb, the competition for resources in the Eastern Mediterranean, or the longstanding conflict between Algeria and Morocco over Western Sahara. This should not deter Europe. But it requires policymakers – at EU headquarters and in member states’ capitals – to develop strategies and policies that are honest about the risks involved, and clearly define the role Europe wants to play, not just as a trading partner but as a geopolitical and security actor.”