Egypt-Qatar Relations: Melting of the Ice?

The MED This Week newsletter provides expert analysis and informed comments on the MENA region’s most significant issues and trends. Today, we turn the spotlight upon Egypt-Qatar relations, as we look at President Abdel Fattah Al-Sisi’s inaugural visit to Doha after a four-year rift between the two countries. On September 13 and 14, the Egyptian President,

The MED This Week newsletter provides expert analysis and informed comments on the MENA region’s most significant issues and trends. Today, we turn the spotlight upon Egypt-Qatar relations, as we look at President Abdel Fattah Al-Sisi’s inaugural visit to Doha after a four-year rift between the two countries.

On September 13 and 14, the Egyptian President, Abdel Fattah Al-Sisi, and the Emir of Qatar, Tamim bin Hamad Al-Thani, met in Doha in a bid to bolster diplomatic and economic ties following years of frayed relationships. In June 2017, Egypt had indeed joined Saudi Arabia and its Gulf allies, the United Arab Emirates (UAE) and Bahrain, in cutting links with Doha over its support for the Muslim Brotherhood and its alleged interference in Cairo’s domestic affairs. Al-Sisi’s trip reciprocates the Emir of Qatar’s visit to Cairo at the end of June 2022, when the two leaders took initial concrete steps to enhance cooperation upon a broad range of sectors. This week’s meeting is, hence, another signal that the “diplomatic ice” between Egypt and Qatar has begun to melt. Besides, mutual interests appear to drive this rapprochement. On the one hand, the North African country is attempting to lure Gulf financing to sustain an economy in disarray, which has been further struck by the global consequences of Russia’s invasion of Ukraine. On the other, Qatar fears the repercussions of (socioeconomic) instability within the Arab world’s most populous nation, whilst acknowledging Cairo’s centrality in MENA politics and also its inevitable role in some of the most troubled conflicts of the region. 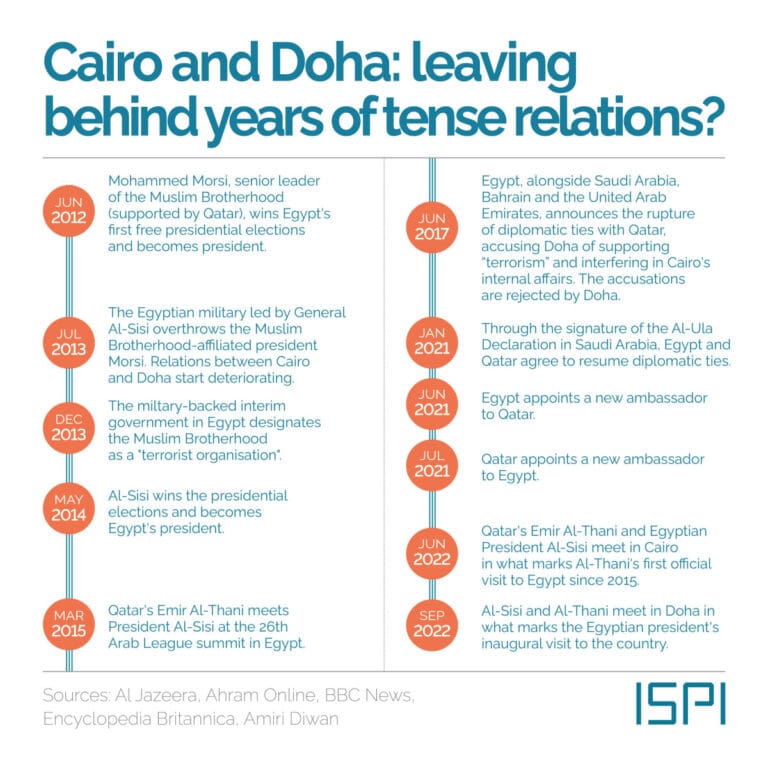 Experts from the ISPI MED network react to the latest political and economic developments in Egypt-Qatar relations.

The Middle East’s current Zeitgeist speaks to economy and pragmatism

“Al-Sisi’s visit to Doha is yet another illustration of the current Zeitgeist in the Middle East. After ten years of intense regional competition and conflict, following the COVID-19 pandemic, and as Russia’s war in Ukraine places the future of the global order into question, countries across the region are looking to put their differences aside and focus on economic development above all else. The equation is simple: Egypt needs Gulf money, including from Qatar; and the Gulf states – again, including Qatar – see opportunities in Egypt’s economic growth, whilst fearing the implications of economic instability in the Arab world’s most populous nation. That does not mean that all the problems in Qatari-Egyptian relations have been resolved, but for now the hatchet has been buried. Just how deep – only time will tell.”

“President Al-Sisi’s official two-day visit to Doha demonstrates a warming of relations between Egypt and Qatar following a three-and-half-year diplomatic, and economic boycott of Qatar that the 2021 Al-Ula Declaration ended. After restoring diplomatic ties, Qatar and Egypt have engaged in mutual delegation visits, and have signed several bilateral agreements. These include; economic, trade, energy, food and investment cooperation. Besides enhancing its investment opportunities and strengthening its economic ties with Egypt, Qatar clearly recognises Cairo’s importance and centrality within Middle Eastern politics. Doha is eagerly pursuing several regional initiatives involving mediation and conflict resolution in some of the most protracted regional conflicts. Against this backdrop, Cairo’s role will be extremely valuable in supporting such initiatives to bring peace and stability – a prelude to cooperation and development in a region that has for decades been plagued by war and conflicts.”

Struggling with the economy at home, Al-Sisi hopes to win Doha over granting new financial investments

“President Al-Sisi’s visit to Qatar, which the state’s flagship newspaper, Al-Ahram, referred to as a “brotherly” nation, reflects the ongoing abandonment by Egypt and its allies of their largely failed effort to isolate and pressure Qatar into submission. Over the past year, despite the vitriol both sides of this conflict sought to stir amongst their respective populations, so as to place them one against the other, Cairo and Doha have publicly embraced, seemingly as if nothing had ever happened. That said, Egypt was more circumscribed than Saudi Arabia or the UAE towards Qatar. Indeed, Cairo refrained from expelling Qataris from Egypt, as any reciprocation would have exceedingly harmed Egypt in these regards. Now, Egypt is facing a dramatic shortfall in financing and desperately needs help. In Doha, Al-Sisi is undoubtedly hoping to return home with promises of billions more in investments and, if he’s lucky enough, low-interest loans; the latter being something his friends in Riyadh and Abu Dhabi seem reluctant to offer as of late.”

The economic dividends of the normalisation

“On September 14, Egyptian President Abdel Fattah Al-Sisi wrapped up his inaugural visit to Qatar during his time in office, reciprocating Qatari Emir Sheikh Tamim bin Hamad Al-Thani’s visit to Cairo at the end of June. In the words of the Qatari news agency, the visit heralds “a new era of relations between the two countries.” Those relations have been rocky ever since the removal of former President Mohamed Morsi by the military, after massive demonstrations against him and the Muslim Brotherhood in 2013. In 2017, Egypt joined Saudi Arabia, the UAE and Bahrain in boycotting Qatar. The boycott was lifted in 2021, and ever since the countries have been racing to normalise relations. The most obvious signals of this rapprochement are economic – Egypt’s economy has been battered by the knock-on effects of the fallout from the pandemic, followed by the war in Ukraine. The meeting in Qatar resulted in the signing of three Memorandums Of Understanding, including one between the respective sovereign wealth funds. Economic ties are a vital and strategic component of international relations, and in the short term, Qatari investment is a lifeline to the Egyptian economy. In the longer term, it helps ensure stability.”

“Egypt is currently pursuing its own version of “zero problems with the neighbours” by re-establishing relationships with Turkey and Qatar. However, Cairo is not leading the way, but rather it is following in the footsteps of the Gulf states, which have already restored ties with Doha and Ankara. In other words, Cairo’s policy in the Middle East is still acting within the framework set by the Gulf countries, as it lacks broad autonomy. Cairo’s political move can be explained by Al-Sisi seeking to improve its regional relations in attempt to attract much-needed Gulf investments for overcoming economic challenges. However, the pre-condition for the current diplomatic rapprochement has been for Doha to distance itself from foreign Islamist organisations, which Cairo perceived as connected to the Muslim Brotherhood and, therefore, hostile to the current government. Such a change also indicates that Qatar does not consider it strategic to bet on Islamist movements or parties to advance its regional political goals.”