The MED This Week newsletter provides expert analysis and informed comments upon the MENA region’s most significant issues and trends. Today, we place the spotlight upon COP27, the 27th annual UN meeting, hosted this year in the Egyptian city of Sharm El-Sheikh.The Mediterranean region is currently warming 20% faster than the global average: devastating heatwaves, water shortages,

The MED This Week newsletter provides expert analysis and informed comments upon the MENA region’s most significant issues and trends. Today, we place the spotlight upon COP27, the 27th annual UN meeting, hosted this year in the Egyptian city of Sharm El-Sheikh.The Mediterranean region is currently warming 20% faster than the global average: devastating heatwaves, water shortages, loss of biodiversity, and risks to food production are already affecting this ‘climate change hotspot’. From 6 to 18 November 2022, Sharm El-Sheikh is hosting the 27th annual UN meeting (COP27): heads of state and climate leaders are gathering in the Egyptian resort city in an attempt to relaunch global action on climate mitigation and adaptation and find possible solutions to limit global warming. The implementation of existing climate agreements, and their respective financial commitments, is at the very centre of negotiations. Nevertheless, in a year characterized by the return of war in Europe and the consequent geopolitical and economic repercussions, furthering climate ambitions seems an extremely difficult mission. Along with COP28, to be held in November 2023 in the United Arab Emirates, this year’s edition marks the growing commitment of MENA countries to global climate action. However, balancing climate engagements with the over-dependence of the region upon fossil fuels presents several economic and political challenges. How will the countries of the region tackle the effects of global warming upon their environment, biodiversity, and natural resources? Will food security be impacted? What opportunities for economic diversification, regional and international cooperation could emerge from such climate action?

Experts from the ISPI MED network react on the latest developments from Sharm El-Sheik, the growing impact of climate change within the MENA region, and the economic and diplomatic opportunities stemming from direct climate action. 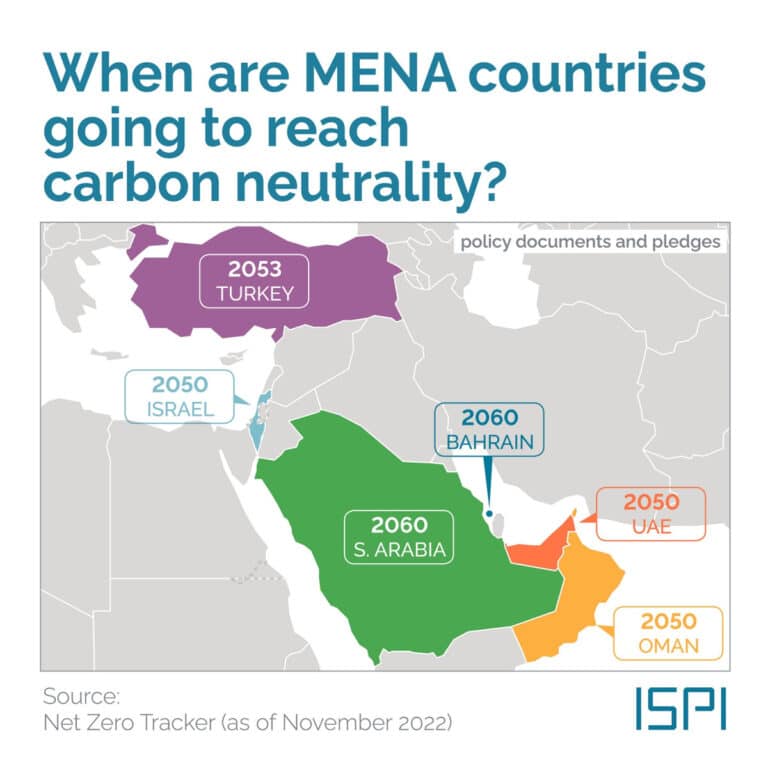 As the climate changes, food security across the MENA region is being compromised. Agricultural production is being hampered by severe water scarcity, rising temperatures, and intense/extensive pest infestations. Natural resources, especially biodiversity, are under relentless threat from the persistent impacts of climate change. Forest fires, though mostly of anthropogenic origin, are proliferating; wetlands and humid soils are drying out due to recurring droughts which are becoming increasingly intense and frequent. These impacts, amongst many others, are negatively affecting livelihoods, especially those of rural communities, forcing many to abandon their lands and move to cities and urban settlements. This displacement, whether internal or transboundary, is leading to increased demands upon social and economic services in host communities. With the world’s economy stalling, the provision of these additional services has increasingly become beyond the means of many governments which is causing heightened tension, and at times hostilities, between the hosts and the displaced, both of whom are competing for ever diminishing resources.

Climate change is a threat to food security

Climate change will negatively affect food production within the MENA region. It will also certainly cause significant damage to agricultural export economies of fruit and vegetables in countries such as Turkey, Tunisia, and Morocco. Droughts within export nations such as North America, Brazil, India, and Australia can be even more threatening to food security within the region than droughts experienced at home. The MENA region is already the world’s largest grain importer, and in the near future its food imports will yet again be required to increase. However, if other countries are capable of producing an exportable surplus, and the MENA countries can generate the foreign exchange to pay for such food imports, they still might be able to adapt. That is why economic diversification, inclusive growth, and social safety nets are so important for food security in the region.

By presiding the UN Climate Conference (COP27), Cairo is ideally taking a lead in global climate action. The conference is an opportunity for the Egyptian government to showcase achievements in pathways made towards energy transition, and also the overall ambition of its climate strategy: Egypt aims at reaching a 42% share of renewable energy in its electricity mix by 2035, and has approved a wide set of documents to support its green transition. In addition, the COP27 is an opportunity for the country to leverage its international standing, economic attractiveness, and diplomatic stance (particularly in regards to Africa), as the main topics of the talks will reflect the most urgent priorities for the continent. However, being under the spotlight of COP27 means openly airing the country’s many contradictions: from the difficult compresence between climate goals and the targets of becoming a regional energy hub, increasing natural gas exports, to the denounce of human rights abuse and the crackdown on climate activist.

Just weeks before COP27, Oman announced its ambition to achieve carbon neutrality by 2050, being the fourth GCC country to do so after the UAE, Saudi Arabia, and Bahrain. This week at COP27, Oman released its carbon neutrality strategy and was in fact the first GCC country to do so. This in itself can be seen as a turning point for the GCC countries, featured heavily by hydrocarbon wealth, to integrate economic decarbonisation into their future outlooks. Indeed, this is a move in the right direction, as these countries aim to diversify their sources of economic revenues and reduce dependence upon hydrocarbon export revenues as much as possible by adopting a carbon neutrality strategy spanning different economic sectors such as transportation, power, industry, logistics, finance, and tourism. In such cases, economic decarbonisation creates a wealth of new avenues for investments across different economic sectors along different value chains, hence creating new jobs and possible sources of income in different areas.

Transition will be challenging for MENA hydrocarbon producers

The over-dependence upon fossil fuels, for both exporters and importers, in the region suggests that the energy transition will be challenging at best, and have major implications for the economic and fiscal health in MENA countries. The region’s exporters must proactively diversify their energy sources, despite the cost competitiveness of their fossil fuels, and also whilst contending with an expected fall in their demand. Demand is likely to decline as a result of increasingly rigorous policies on carbon and climate, greater energy efficiencies (such as those derived from product improvements, or, switching to cleaner energy sources), and a growing decoupling of energy consumption from income in some advanced economies. These demand-side factors will cause the shift to be ever more costly for those undertaking “transition” investments. This is especially true for MENA’s export economies, many of which already face high fiscal breakeven prices and need to embark upon diversification drives, often spearheaded by the public sector, all whilst they simultaneously lose oil and gas revenue.

The COP27 in Egypt, has been tough for Europeans. The current scramble for hydrocarbons (especially from the Gulf) to replace Russian energy has paved the way for accusations of climate hypocrisy against the Europeans, undermining years-long policy work upon climate change. A much more active engagement would be key to demonstrate that Europe remains true to its climate commitments, despite the current unprecedented energy security crisis. Moreover, climate action could be the catalyst for regional diplomacy within the Gulf amongst the monarchies, Iraq and Iran. Amid the collapse of talks to revive the nuclear deal with Iran, the economic diplomacy that was leveraged by the Gulf monarchies to entice Iran away from military confrontation, might soon become impossible. “Softer” issues such as environmental security might become the only viable platform to at least keep dialogue open among Gulf players. Europeans should start working now, in Egypt, on a path of incremental engagement towards the UAE-based COP28 to promote the establishment of a sustainable and operational dialogue upon environmental security including the GCC countries, Iraq and Iran. Europeans can significantly strengthen existing regional initiatives with diplomacy, technical and scientific cooperation and strategic investments.