Bin Zayed in Russia: A Headache for Washington?

The MED This Week newsletter provides expert analysis and informed comments on the MENA region’s most significant issues and trends. Today, we focus upon the visit that the Emirati President Mohammed bin Zayed paid to Russian President Vladimir Putin in Saint Petersburg.

On Tuesday, October the 11th, the Emirati President Mohammed bin Zayed (MBZ) travelled to Russia to meet with President Vladimir Putin. Although the UAE have justified this visit as an attempt to facilitate a negotiation process between Moscow and Kyiv, the visit itself risks putting further strain on the relations with the US. Just a week ago, with global energy markets detrimentally suffering due to the consequences of the Ukraine invasion, the UAE and the other members of OPEC+ decided to cut oil production by 2 million barrels a day, in an attempt to stabilise oil prices in a moment of volatility. Pressures being placed from the Biden administration were ultimately useless in preventing such an outcome, which risks having dire consequences for both the US and European energy markets. In such a complex international environment, the visit paid by Mohammed bin Zayed signals the country’s interest in further diversifying its partnerships, regardless of how this might be perceived in Washington. Indeed, coupled with Abu Dhabi’s and Riyadh’s ambivalent stance upon the Ukraine war, MBZ’s meeting with Vladimir Putin is the most recent evidence of the shifting relations between the US and the Gulf monarchies. 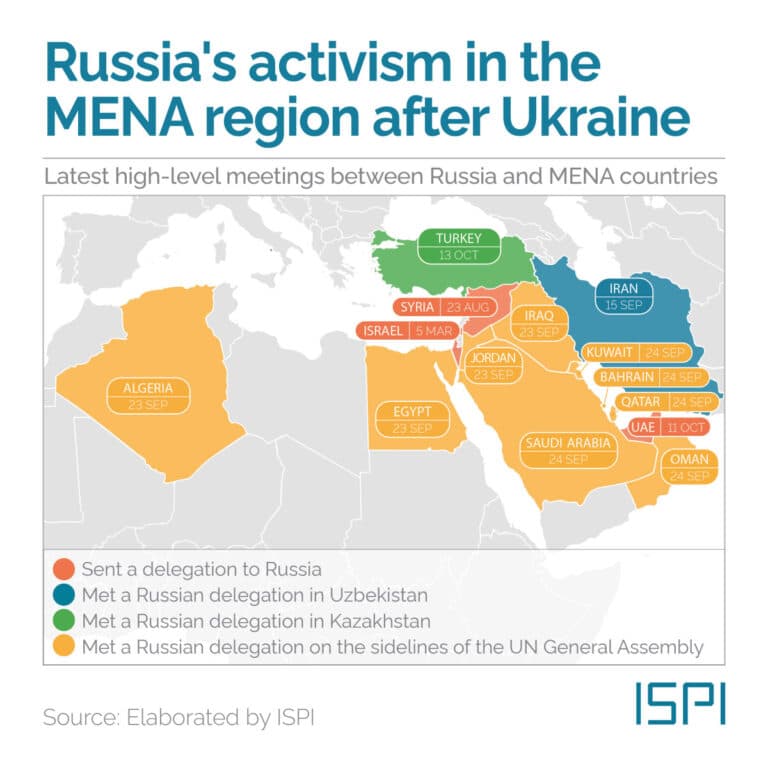 MBZ is taking a reputational risk with this visit

The UAE President is taking a huge reputational risk committing to a formal state visit to Saint Petersburg in times of heightened great power tension between the “West” and Russia. As Russia’s most important ally in the Middle East, that has been instrumental for the Kremlin in facilitating sanctions evasion, Abu Dhabi’s actions are currently under close scrutiny in Europe and the United States. Committing to this trip in the week following a controversial OPEC+ decision to cut oil production amid a western energy crisis, means that MBZ must have something concrete to show after the meeting with Putin that goes beyond simply being business as usual. The “West”, and the United States in particular, would want to see the UAE playing a constructive role in facilitating a political solution in Ukraine, and will be expecting the UAE to use their leverage and influence in Moscow to that means.

Mohammed bin Zayed’s state visit to Russia helps to explain the gradual, but continuing, recalibration of UAE foreign policy toward global powers. However, at this critical juncture in international politics, the visit shows that MBZ has overtly made peace with President Vladimir Putin’s aggressive policies and erratic behaviour toward Russia’s immediate neighbours. To be sure, the visit indicates that the UAE has become yet another component of a global authoritarian axis headed by Russia and China. It further cements the UAE’s place in OPEC+, which is emerging as not only an economic actor, but also a geopolitical actor within international politics. What is worrisome for the UAE’s future strategic considerations are two closely related and dangerous possibilities. The first being the clear likelihood that Russia will lose its war of choice in Ukraine, causing Putin’s political demise and Russia’s retrenchment as a global power. The second is the United States’ loss of interest in a strategic relationship with Abu Dhabi, weakening the UAE’s posture vis-à-vis Iran and other actors in the Gulf.

Russia remains a key partner for the UAE

Prior to Russia’s invasion of Ukraine, relations between Russia and the UAE were solid. In 2020 alone, the UAE increased its trade with Russia by 78% year-on-year. Arguably, Western sanctions and the insecurity created by the Ukraine war indirectly boosted such bilateral relations. For instance, Russian property purchases in Dubai surged by 67% in the first three months of 2022. At a multilateral level, the UAE attempted to balance its stance upon the crisis, using its position as an elected member of the UN Security Council to abstain on condemning Russia’s invasion. However, more recently, the UAE voted in favour of a US-backed resolution condemning Russia’s ‘illegal’ referendums. The UAE has also attempted to apply soft power by acting as a mediator in the conflict, with a recent state visit by President Mohamed Bin Zayed to Saint Petersburg. Russia remains the Emirates’ key OPEC+ partner, however the UAE President has also been keen on keeping dialogue open with Ukraine’s President Zelensky.

From the American perspective, Mohammed Bin Zayed’s meeting with Russian President Vladimir Putin landed as a one-two punch after the OPEC+ oil production cut. That decision provides Moscow with a financial windfall, increasing its leverage over Western adversaries as inflation continues to rise and Europe faces the risk of a cold winter. Meanwhile, the warm ties between MBZ and Putin were evident, with the latter at one point offering his coat to the Emirati leader to ward off the St. Petersburg chill.

The UAE public narrative of the visit as a peace mission will not dissuade the negative impression it left in Washington. With analysts reflecting that MBZ would be a more pro-Russian interlocutor than Turkey, the growing ties between the two states do not go unnoticed. Still, with US Congressional ire focused on Saudi Arabia, the UAE is likely to escape the worst. Instead, the Biden Administration is likely to maintain the pressure on Abu Dhabi to break Saudi’s oil leadership and OPEC + unity.