The MED This Week newsletter provides expert analysis and informed insights on the most significant developments in the MENA region, bringing together unique opinions on the topic and reliable foresight on future scenarios. Today, we turn the spotlight on the first year of the Biden administration, focusing on the evolution of the US’ approach to several

The MED This Week newsletter provides expert analysis and informed insights on the most significant developments in the MENA region, bringing together unique opinions on the topic and reliable foresight on future scenarios. Today, we turn the spotlight on the first year of the Biden administration, focusing on the evolution of the US’ approach to several key policy issues concerning the Middle East.
January 20th, 2022 marks the first anniversary of Joe Biden’s inauguration as the 46th President of the United States. One year into his presidency, Biden has only partially been able to give a new direction to US policy towards the Middle East. Like for previous administrations, the MENA region represents less of a priority for the current US president, and the “pivot to Asia” has compelled Biden to focus his foreign policy efforts on other scenarios. Nevertheless, Biden’s approach to the MENA region has departed on several issues from the one of the Trump administration. On the one hand, Biden has radically inverted his predecessor’s “maximum pressure” approach towards Iran. Talks for the revival of the Iranian nuclear deal are currently taking place in Vienna, and Biden has adopted a less confrontational approach vis-à-vis Tehran. This choice has contributed to the stabilization of Iraq and is in line with the normalization trends that are emerging in the region. Biden’s foreign and regional policy priorities have also contributed to a reduced US engagement in Syria, for which the new US administration seems to lack a clear strategy. On the other hand, the pillars of US policy in the Middle East are still in place. Biden has attempted to have a more balanced approach towards the Israeli-Palestinian conflict, relations with Israel and Egypt remain positive. At the same time, the US is still deeply committed to the security of Gulf monarchies. Still, Washington is increasingly concerned about the growing relations between its GCC partners and China, together with the lack of tangible achievements in Yemen. As for Turkey, relations remain uneasy due to the numerous frictions that have damaged their bilateral ties (namely Turkey’s acquisition of the Russian S-400 missile system). Nonetheless, both parties share a mutual interest in having suitable dialogue channels, in light of Ankara’s critical role as a NATO strategic partner in the Middle East and in the fight against terrorism.Experts from the ISPI MED network react to Joe Biden’s Middle policy, one year into his inauguration.With Iran, a deal is still “up in the air”

“The jury is very much still out on US-Iran policy one year into the Biden presidency. Unfortunately, the US and Iran failed to agree on a way to revive the 2015 Joint Comprehensive Plan of Action (JCPOA) before the Iranian presidential elections last year. The new Iranian negotiating team is taking a much tougher stance, demanding the sorts of guarantees not available from the US political system. At this juncture, it is unclear whether the deal can be salvaged. Even if it can, prospects for US-Iran relations are cloudy because of significant disagreements on a host of other security and regional issues. The only positive trend – Iranian reconciliation with its neighbours – appears threatened by new violence in Yemen that has spilled over into drone attacks on the United Arab Emirates. Iran relies heavily on China and Russia to survive sanctions, and neither country is in a mood to make life easier for the US or its European allies.”

Negotiations in Vienna are buying time for Iraq’s domestic issues

“The United States’ relationship with Iraq is shaped by its Iran policy. This has put a lot of pressure on Iraqi leadership to balance ties between its Eastern neighbour and its Western ally. The revival of the JCPOA talks under the Biden administration has taken some of the pressure off Iraq, which could not have come at a more convenient time domestically. As Iraq is undergoing the formation of a new government, a less active U.S. and a distracted Iran will mean that the next Iraqi government will likely be more beholden to domestic politics than foreign affairs. As international relations play out between the U.S. and Iran in other domains, unfortunately, this does not stop Iran-aligned actors in Iraq from acting unilaterally and maintaining a threatening level of violence. However, an American administration less interventionist has contributed to a less hostile battleground with Iran in Iraq.”

“US policy in Syria is built on several false calculations, the most important of which was that Assad would step aside. Biden’s current “hands-off” policy is a partial admission of Washington’s failures. Refusing to make costly changes, he decided to kick the ball down the road to the next administration, leaving the region in limbo.

Instead, Assad’s regime has survived; opposition forces cannot drive him from power, and Western sanctions cannot win significant policy changes. Utopian UN resolution 2254 has become an impediment to more realistic compromise. Iran will not be driven from Syria. US support for quasi-independent states in northern Syria will not force Damascus to make political concessions. The Kurds are reaching out for a compromise because they know the US will leave someday. Assad knows it too, which is why he refuses any independent Kurdish military element, offering only cultural autonomy. The Turks also know the US will eventually turn away from the Kurds, which is why they regularly destabilize the region and pick off Kurdish leaders.

Arab leaders, unlike Biden, are coming to grips with Assad’s staying power and are preparing to take Syria back into the Arab League. They know that the only way to limit Assad’s deep dependence on Iran is through investment and Arab unity. Once Arab capitals reverse their “hands-off” policy toward Syria, Washington will have to follow.”

“The Biden administration’s approach to Israel-Palestine is far more circumspect than its predecessor, prioritizing the avoidance of political risk over progress on an overarching political program. By contrast, the Trump administration attempted to revolutionize American policy by siding openly with Israel’s ultranationalist camp in its effort to deliver a decisive blow to the Palestinian national movement and the two-state solution. The Biden administration’s limited approach seeks only modest gains on the ground, while supporting, at least rhetorically, the agenda of two states.

As such, Biden has attempted to shore up the Palestinian Authority, which faces chronic financial instability and rapidly deteriorating legitimacy among its own public, as well as the new government in Israel. Unfortunately, this conservative approach is unlikely to achieve significant results or turn the conflict away from its disastrous trajectory. Moreover, Washington appears to be falling into a familiar pattern of supporting stability over democracy and human rights in the Middle East.”

Stabilizing the Gulf is a difficult business, as is preventing an eastward slide

“One year into the presidency, the Biden Administration is finding it hard to make progress on its most important objectives in the Gulf region – namely limiting Iran’s nuclear development and ending the war in Yemen.  As the renewed JCPOA talks stall and the fight in Yemen spills over into the UAE, the conditions for a less volatile and dependent Gulf, from an American perspective, seem far from being achieved. The administration’s commitment to openly consult with its Gulf partners doesn’t erase the reality that Gulf states are leaning more towards pursuing their security objectives and managing the fallout. Some rigid debates over the sale of American weapons to Saudi Arabia and the UAE have further underlined the level of complexity that comes when dealing with the region. That is also considering that the US looks warily toward its Chinese strategic competitor, and Gulf states read the trendlines, tracking East in their economic engagements and collecting a more diverse array of strategic partners.”

“Under the Biden administration, relations between the United States and Turkey continue to be strained. Over the years, the numerous frictions that have damaged their bilateral ties – from the US support to the Kurdish forces in Syria (the People’s Protection Units that Ankara considers linked to the PKK) to the controversial Turkish purchase of the Russian S-400 missile defence system that costed Turkey both its place in the F-35 development program and the imposition of American sanctions in December 2020 – remain unsolved. Furthermore, the emphasis of President Joe Biden on the respect of democracy and fundamental freedoms in US foreign policy, as well as his recognition of the 1915 Armenian massacre as a genocide, have all added further disagreement between the two countries. Nonetheless, channels of dialogue have been opened even at the highest level, as demonstrated by two meetings between the American President and his Turkish counterpart Recep Tayyip Erdogan. Indeed, both parties share a key mutual interest in continuing to have lines of communication. In fact, while Ankara cannot afford irreparable rifts with Washington in this particularly delicate phase of its economy, the US, on the other hand, intends to avoid the scenario of Turkey – a strategic partner in the Middle East as well as in the fight against terrorism – drifting into the Russian sphere of influence.”

“One year following Biden’s announcement about the end of the war in Yemen, we are now seeing more escalation and less chances for peace. The US, however, is not behind the fights underway across Yemen. But the US does not have enough leverage on all conflicting parties to fulfil its promise of resolving the conflict. The US envoy to Yemen, Tim Lenderking, tried to convince the Houthi movement to engage in peace negotiations, but the movement has been refusing this option because it accuses America of backing the Saudi-led coalition. Ironically, Biden’s Yemen policy was understood by the Houthis as a defeat announcement. It encouraged them to launch a massive offensive against Marib, the last stronghold of the internationally recognized government in the North. Another issue is that the US always looks at Yemen from the regional powers’ perspectives. Both Obama and the Trump administration enabled Saudi meddling in Yemen, while the Biden administration is linking Yemen to its negotiations with Iran. A successful resolution of the conflict requires adopting a Yemen-centric lens that has thus far been missing.” 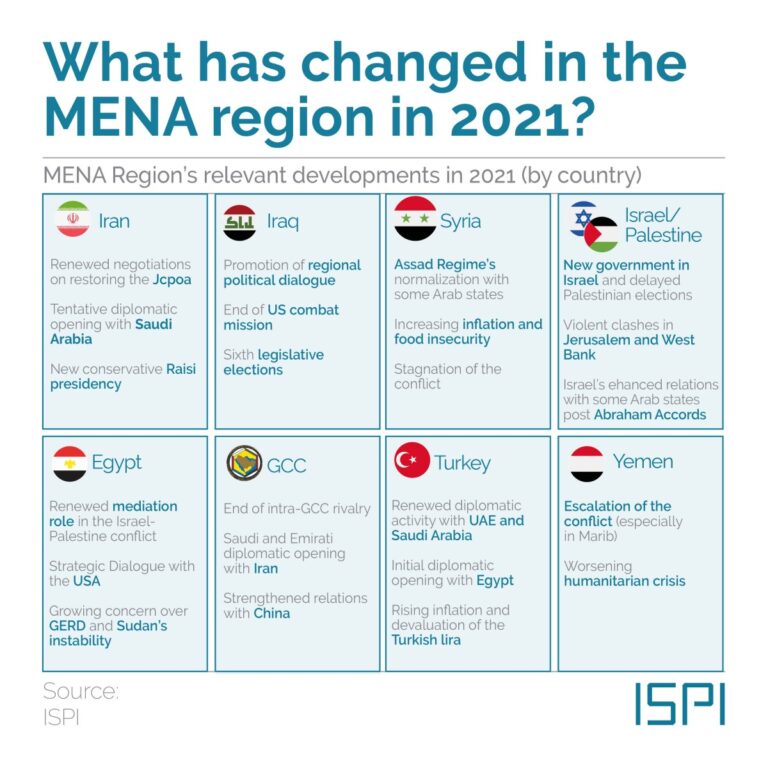