Assad in the UAE: A Watershed Moment for the Syrian thaw?

The MED This Week newsletter provides expert analysis and informed insights on the most significant developments in the MENA region, bringing together unique opinions on the topic and reliable foresight on future scenarios. Today, we turn the spotlight on Syrian President Bashar Al-Assad’s visit to the UAE, his first trip to an Arab country in over

The MED This Week newsletter provides expert analysis and informed insights on the most significant developments in the MENA region, bringing together unique opinions on the topic and reliable foresight on future scenarios. Today, we turn the spotlight on Syrian President Bashar Al-Assad’s visit to the UAE, his first trip to an Arab country in over a decade.

As Moscow becomes increasingly isolated in the aftermath of the Ukraine invasion, Russia’s key ally in the Middle East is enjoying a moment of renewed diplomatic activism. On March 18, Syrian President Bashar al-Assad travelled to the United Arab Emirates on his first trip to an Arab state since the outbreak of the civil war. Assad’s visit was but the culmination of a process that has been unfolding for years and has gained momentum in the past few months. Abu Dhabi is at the forefront of the attempt to rehabilitate Assad. After backing the Syrian opposition early in the conflict, the UAE was one of the first countries to reopen its embassy in Damascus in 2018. This position is backed also by Egypt, whose President has repeatedly expressed support for Assad in the past years. Both countries have been vocal about Syria’s readmission to the Arab League, but some member states – including Saudi Arabia – still refrain from embracing Damascus’ reintegration. If Assad was to attend the Algeria summit scheduled for November 2022, this rehabilitation process would reach a turning point. This issue is similarly contentious beyond the Arab world. As a key player in the Syrian civil war, Turkey fears that such regional support might embolden Assad. The European Union and the United States have been staunchly opposing the normalisation, but it is unclear how far they would go to prevent it. 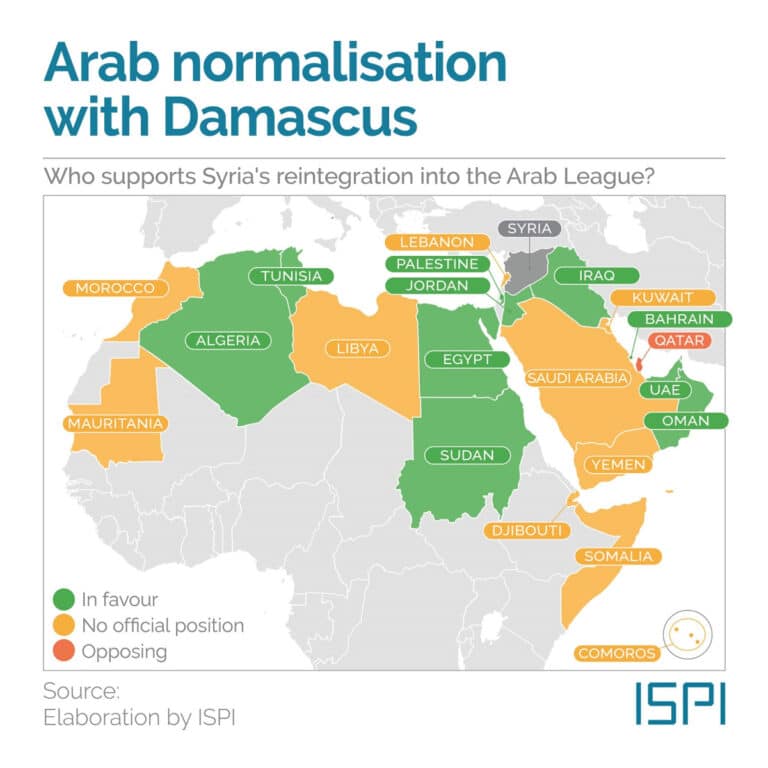 The experts of the ISPI MED network react to the recent developments in the Arab normalisation with Assad.

“There are three elements to keep in mind trying to frame today’s Emirati foreign policy: economy-first, network strategy, and long-term vision. These are also related to the UAE’s normalization with Syria. First, after a military-oriented decade, the UAE now considers its economy to be its top priority (ex. the “Abraham Accords”; the US-UAE-Israel-India Quad). Bashar al-Assad’s recent visit on Emirati soil was aimed at increasing economic cooperation and post-war reconstruction. Second, UAE’s regional and global affairs approach is increasingly about networks, not alliances, where the focus is placed on diversifying relations with other partners outside of the US, such as China, India, and Russia. Assad’s Syria further connects the Emirates to Russia, Iran and, to a lesser extent, Lebanon. This strategy is rooted in Dubai’s global hub experience and the DP World logistics model, which builds upon connectivity. Third, similarly to China, the Emirates have come to develop a greater sense of long-term vision – pushing them towards Eastern (ex. Asia) and Southern partners (ex. Africa) since the Western-centred world order is perceived as declining. This East-centred order is already a reality in Syria as Damascus has recently joined the Belt and Road Initiative. However, all these elements require regional and international stability to succeed. The UAE’s model, which intrinsically relies on trade, would suffer greatly in a highly-polarized, sanctions-driven, or conflictual world system.”

Sisi and Assad: united in “counterrevolutionarism”

“Egypt’s support for Assad’s regime is partly born of President Sisi’s personal outlook. Sisi has long made clear he supported the continuation of the Assad regime despite his backers in the Gulf initially disagreeing. Among Sisi’s primary concerns at home is the rejection of democratic uprisings, Islamists, and insurgents. He also sees Arab armies as his preferred caretakers of Arab states. He has no interest in popular uprisings succeeding, having executed a counterrevolutionary coup at home himself.

It’s also crucial to understand that, unlike the UAE or Saudi Arabia, Egypt perceives no strategic rivalry with Iran, nor does it see major conflicting interests with Iran. This helps explain why from Syria to Lebanon to Yemen, Saudi led efforts to check Iranian power have attracted little, if any, enthusiasm in Cairo. In that sense, Egypt is the most consistent counterrevolutionary actor among the reactionary coalition in the region. Egypt’s Gulf partners are unfortunately coming around to Egypt’s position on Assad.”

“Saudi Arabia views the question of Syria’s reintegration into the Arab fold with some ambivalence. It shares with the United Arab Emirates an interest in limiting the range of Iranian activity and influence. To that end, it supports an overall strengthening of Arab ties and Gulf outreach as an alternative to Iran, especially in Iraq. There are also signs of this reconsideration in the Kingdom’s approach toward Lebanon, with the Saudi Foreign Ministry welcoming the recent statement from the Lebanese Prime Minister Mikati and contemplating the return of its ambassador to that country. Nonetheless, the embrace of President Assad remains anathema to the Saudi public and investment in its rehabilitation is unappealing. I expect the Saudi leadership is to be happy to let its Emirati partners take the lead – and bear the heat – on this front.”

“It is important to point out that when Arab states appear reluctant to normalize relations with the Syrian regime, they are simply erecting a smokescreen behind which they hide from their people. Nonetheless, there are three important reasons for this reluctance. First, Arab regimes cannot forget the cruelty the Syrian regime inflicted on its own people. Arab masses will not forget those atrocities or forgive those who cover them up. Second, the regimes cannot normalize with Syria under Assad after he gave the Iranians a free hand to do what they want in the country. Third, most Arab states will not normalize with Bashar al-Assad so long as the United States stands against rehabilitating him. Much can happen between now and next November, but it is likely that Syria will attend the Arab summit in Algeria informally and at a lower level than the presidency.”

A regime return to Idlib: “detrimental” to Ankara’s interests

“Turkey’s interests in northern Syria, where it has positioned itself as an important player, remain diametrically opposed to the priorities of the Syrian regime. Since 2017, Ankara has deployed estimated 8,000-10,000 Turkish troops in three pockets of northern Syria and has supported rebel factions there. In the northwestern Idlib province, Turkey has a vested interest in sustaining the existing ceasefire it brokered with Moscow in March 2020 to prevent a new inflow of refugees (millions of civilians currently live there). Any steps enabling the Syrian regime to gain more regional legitimacy and support may embolden it to embark on new military advances – possibly with Russia’s backing – in the northwest. Ankara would see this as detrimental to Turkey’s national security interests and likely respond militarily. A new regime offensive in Idlib could upset the fragile status quo there and come with grave humanitarian consequences.”

Syria’s normalization is out of European sight

“For years, Americans and Europeans have tried to force Bashar al-Assad into a transition process through sanctions and isolation, without success. As always, though, there is no single European opinion. Some mostly southern and eastern EU members want to let Syria stabilize and recover, while mostly northern and western members insist on continued pressure. The former camp has some advantages. First, regional governments are already normalizing with Syria, and the EU cannot ignore that indefinitely. Second, Syria’s worsening economic crisis forces Syrians to emigrate and raises the risk of a relapse into major war. The EU wants neither of those things. Third, Syria is no longer a front-page issue, reducing the political cost of a policy shift. But there are powerful countervailing forces, too. Inertia is one—not changing is always the easier option. And with the war in Ukraine, some Europeans may want to punish Russia by piling on the pressure in Syria.”

America has harder nuts to crack (for now)

“While Assad’s visit to the UAE was striking, it was also the latest in a years-long regional trend towards normalizing Syria’s regime. When regional states accelerated engagements with Damascus in 2021, it precipitated a significant pushback from the Biden administration, a restructuring of the ‘Small Group,’ and a visible U.S. return to multilateral Syria diplomacy. This is well received, particularly in Europe. However, Assad’s visit to Dubai also took place within a broader dynamic, in which Russia’s invasion of Ukraine and an impending new Iran nuclear deal have combined to challenge long-standing U.S. relationships in the Middle East. It may be this, rather than Syria specifically, that forces the Biden administration to double-down, push back and to incentivize different behaviors. At the end of the day, actors seeking to normalize Assad should also be aware of the high likelihood that Republicans will win in the midterms in November and force a far more aggressive enforcement of Caesar Act sanctions.”