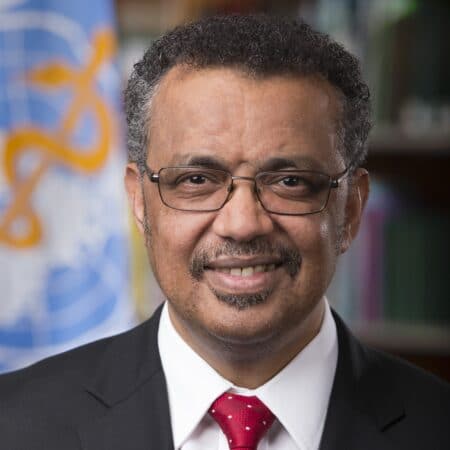 Dr Tedros Adhanom Ghebreyesus was elected WHO Director-General for a five-year term by WHO Member States at the Seventieth World Health Assembly in May 2017. In doing so, he was the first WHO Director-General elected from among multiple candidates, and was the first person from the WHO African Region to head the world’s leading public health agency.

Following his studies, Dr Tedros returned to Ethiopia to support the delivery of health services, first working as a field-level malariologist, before heading a regional health service and later serving in Ethiopia’s federal government for over a decade as Minister of Health and Minister of Foreign Affairs from 2005-2016.

Prior to his election as WHO Director-General, Dr Tedros held many leadership positions in global health, including as Chair of the Global Fund to Fight AIDS, Tuberculosis, and Malaria, Chair of the Roll Back Malaria Partnership, and Co-chair of the Partnership for Maternal, Newborn and Child Health Board.

After taking office as Director-General, Dr Tedros initiated the most significant transformation in the Organization’s history and focused WHO’s work on the mission to “Promote health, keep the world safe and serve the vulnerable.”