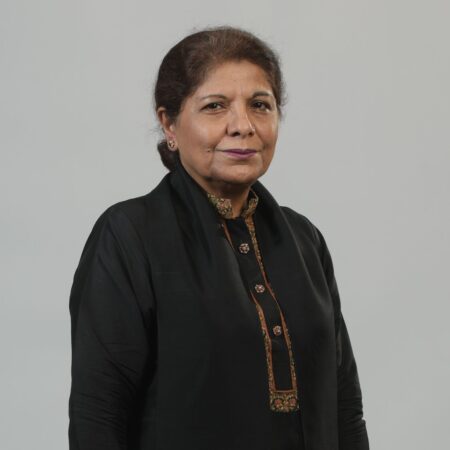 Dr. Shamshad Akhtar, an economist, has had broad based development experience and held a range of senior positions at the national and multilateral organizations.

She served as the Care-Taker Finance Minister of Pakistan holding multiple economic portfolios in the caretaker government and as the Governor, State Bank of Pakistan.

Dr. Akhtar served as the Vice President, Middle East and North Africa at the World Bank, and the Director General of Asian Development Bank (ADB). She also served as the Special Sr. Advisor to the President of ADB.

Dr. Akhtar has doctorate, and a post-doctorate degree in economics from University of Harvard.

Presently, she is member of the PM Economic Advisory Council, the Chairperson of the Boards of the Pakistan Stock Exchange Limited, the Pakistan Institute of Corporate Governance, Karandaaz (the DFID-Bill Melinda and Gates Foundation, a joint venture to promote financial and digital financial inclusion), the Sui Southern Gas Company Limited and the Engro Fertilizers Limited. She is member of advisory board of Sustainable Finance Center (SOAS) in UK. She remains engaged in both global and national policy dialogues and is the Global Advisor for the Belt and Road Initiative and Policy Sherpa for Boao Asia Forum and Advisor to Shanghai Forum.