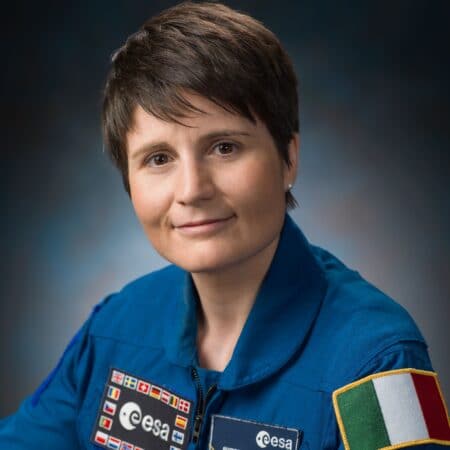 Samantha Cristoforetti is an Italian European Space Agency astronaut, Italian Air Force pilot and engineer. She is the first Italian woman in space. Born in Milan, Italy, in 1977, Samantha Cristoforetti graduated in 2001 from the Technische Universität Munich, Germany, with a master’s degree in aerospace engineering. In 2001 she was accepted in the Italian Air Force Academy where she earned a bachelor degree in aeronautical science. She then attended the Euro-NATO Joint Jet Pilot Training program at Sheppard Air Force Base in the United States, where she earned her fighter pilot wings in 2006. Samantha Cristoforetti was selected as an ESA astronaut in May 2009. She joined ESA in September 2009 and completed her basic astronaut training in November 2010. In March 2012 she was assigned to fly as flight engineer on the Soyuz TMA-15M, as part of the crew of Expedition 42/43 on the International Space Station, where she spent 200 days. Samantha has been assigned a second mission to the International Space Station. She is currently in training for this mission, which is scheduled for 2022.