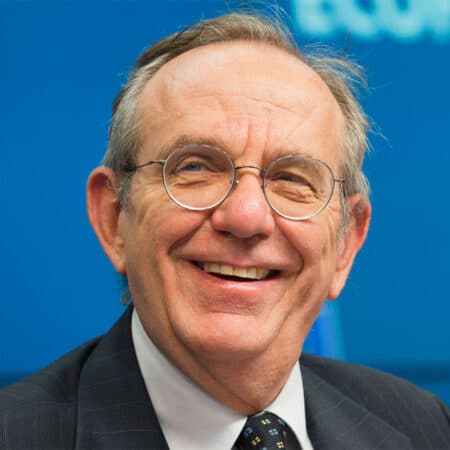 Mr. Pier Carlo Padoan was Minister of Economy and Finance from 21 February 2014 to 1 June 2018. Mr. Padoan was Professor of Economics at the University La Sapienza of Rome, and Director of the Fondazione Italianieuropei, a policy think-tank focusing on economic and social issues. On 1 June 2007 Mr. Pier Carlo Padoan was appointed Deputy Secretary-General of the OECD. As of 1 December 2009 he was also appointed Chief Economist while retaining his role as Deputy SecretaryGeneral. In addition to heading the Economics Department, Mr. Padoan was the G20 Finance Deputy for the OECD and has also lead the Strategic Response, the Green Growth and Innovation initiatives of the Organisation.From 2001 to 2005, Mr. Padoan was the Italian Executive Director at the International Monetary Fund, with responsibility for Greece, Portugal, San Marino, Albania and Timor Leste. He served as a member of the Board and chaired a number of Board Committees. During his mandate at the IMF he was also in charge of European Coordination. From 1998 to 2001, Mr. Padoan served as Economic Adviser to the Italian Prime Ministers, Massimo D’Alema and Giuliano Amato, in charge of international economic policies. He was responsible for coordinating the Italian position in the Agenda 2000 negotiations for the EU budget, Lisbon Agenda, European Council, bilateral meetings, and G8 Summits. He has been a consultant to the World Bank, European Commission, European Central Bank.