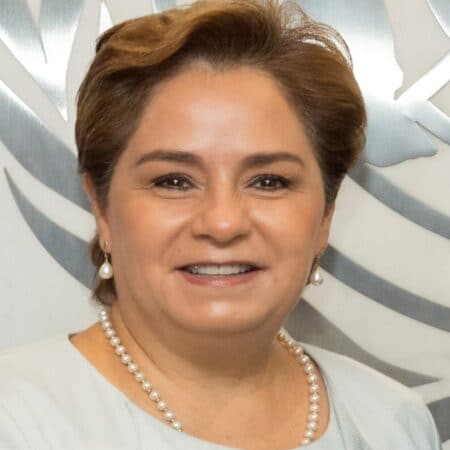 On 18 May 2016, United Nations Secretary-General Ban Ki-moon appointed Patricia Espinosa of Mexico as Executive Secretary of the United Nations Framework Convention on Climate Change (UNFCCC). Ms. Espinosa took office on 18 July 2016. Ambassador of Mexico to Germany since 2012 and from 2001 to 2002, Ms. Espinosa was Minister of Foreign Affairs of Mexico from 2006 to 2012. As Mexico’s representative on multilateral bodies and international organizations in Vienna, Geneva and New York, Ms. Espinosa has been engaged as leader in the global challenge to address climate change and its consequences, notably as President of the 16th Conference of the Parties to the UNFCCC leading to the adoption of the Cancun Agreements. Named by the UN Secretary-General to the High-Level Panel of Eminent Persons on the Post 2015 Development Agenda, she is a tireless supporter of multilateralism as a way to improve conditions for development in all regions of the world, understanding the inextricable link between the aims of the Paris Climate Agreement and the Sustainable Development Goals. Elected Chair of the Third Committee of the UN General Assembly (1996) she played a key role in the process leading to the adoption of the Beijing Platform for Action at the 4th World Conference on Women. Previous Ambassador of Mexico to Austria, Slovakia, Slovenia and UN Organisations in Vienna (2002-2006), she was Chief of Staff to the Undersecretary of Foreign Affairs, Ministry of Foreign Affairs (1989-1991) and responsible for economic issues at the Permanent Mission of Mexico to the UN in Geneva (1982-1988). Born in 1958, she has postgraduate studies in International Law from the Institut Universitaire de Hautes Etudes Internationales in Geneva and is holder of a Degree in International Relations from El Colegio de Mexico.