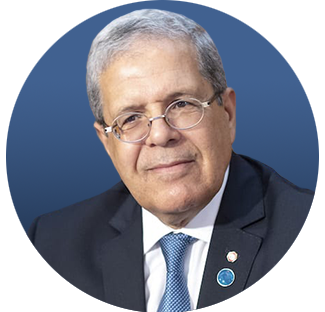 Othman Jerandi was appointed Minister of Foreign Affairs, Migration and Tunisians Abroad in 2020. He is a Tunisian politician and diplomat. He has held several duty stations in Jordan, Korea, Nigeria, Ghana, Sierra Leone and Liberia. He was the Minister of Foreign Affairs from March 2013 to January 2014. Between 2014 and 2019 he was Consultant in International Relations and Multilateral Diplomacy. He was also Deputy Permanent Representative for Tunisia to the United Nations between 2000 and 2002. With a degree in communications, he started his career in 1979 in the government of prime minister Hedi Amara Nouira.