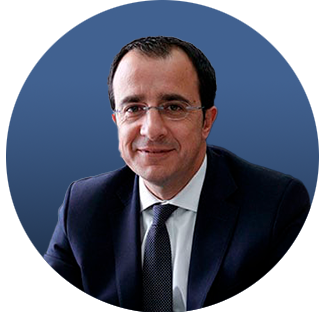 Nikos Christodoulides is an academic, politician and former diplomat serving as the Minister of Foreign Affairs in the Second Anastasiades government of Nicos Anastasiades since March 2018. He has also served as Director of the Office of the Minister of Foreign Affairs and as Director of the Office of the Permanent Secretary of the Ministry of Foreign Affairs. During the Cyprus Presidency of the Council of the European Union he was assigned the duties of the Presidency Spokesman in Brussels. He has been a member of the Diplomatic Service of the Republic of Cyprus since 1999 and has served as Consul General in London, as Deputy Chief of Mission at the Embassy of the Republic of Cyprus in Athens, and as Counsellor at the Permanent Mission of the Republic of Cyprus to the European Union. He studied Political Science, Economics, Byzantine, and Modern Greek Studies at Queens College of the City University of New York and subsequently pursued graduate studies in Political Science at New York University. In 2003 he was awarded a Ph.D. degree from the Department of Political Science and Public Administration of the University of Athens. He then taught at the Department of History and Archaeology of the University of Cyprus as a Specialist Scholar on the subject of “History of the Postwar World.” He is the author of the books “Plans for the solution of the Cyprus problem, 1948-1978” (Athens 2009), and “Relations between Athens and Nicosia and the Cyprus problem, 1977-1988” (Athens 2013).