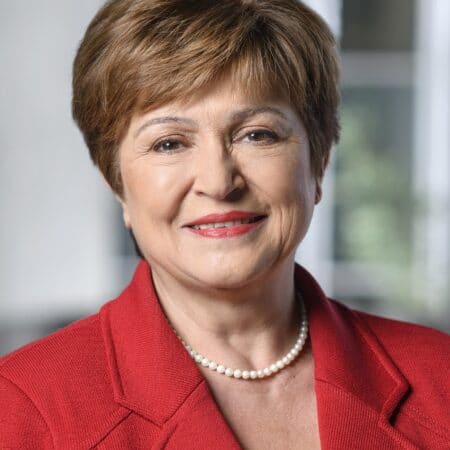 Kristalina Georgieva currently serves as Managing Director of the International Monetary Fund, a position she was selected for on September 25, 2019 and has served as since October 1, 2019. Before joining the Fund, Ms. Georgieva was CEO of the World Bank from January 2017 to September 2019, during which time she also served as Interim President of the World Bank Group for three months. Previously, Ms. Georgieva helped shape the agenda of the European Union while serving as European Commission Vice President for Budget and Human Resources. Before that, she was Commissioner for International Cooperation, Humanitarian Aid and Crisis Response, managing one of the world’s largest humanitarian aid budgets. Ms. Georgieva began her career in public service at the World Bank as an environmental economist in 1993. After serving for 17 years, and in many senior positions, including Director for Sustainable Development, Director for the Russian Federation, Director for Environment, and Director for Environment and Social Development for the East Asia and Pacific Region, her career culminated in her appointment as Vice President and Corporate Secretary in 2008. Ms. Georgieva serves on many international panels including as co-Chair of the Global Commission on Adaptation, and as co-chair of the United Nations Secretary-General’s High-Level Panel on Humanitarian Financing. Born in Sofia, Bulgaria, in 1953, Ms. Georgieva holds a Ph.D in Economic Science and a M.A. in Political Economy and Sociology from the University of National and World Economy, Sofia, where she was an Associate Professor between 1977 and 1993. In 2010, she was named “European of the Year” and “Commissioner of the Year” by European Voice in recognition for her leadership in the EU’s response to humanitarian crises. In October 2020, she received the Atlantic Council’s Distinguished International Leadership Award in acknowledgement of exceptional and distinctive contributions during her career of public service.