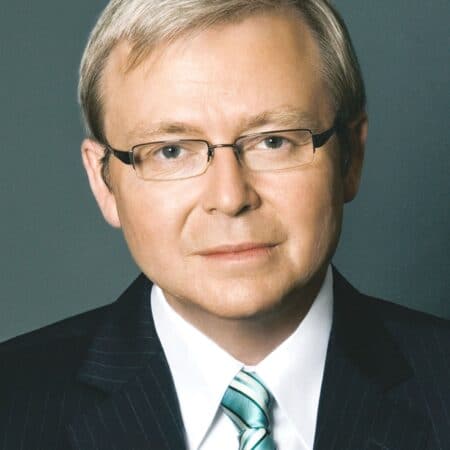 Mr. Rudd served as Australia’s 26th Prime Minister from 2007 to 2010, then as Foreign Minister from 2010 to 2012, before returning to the Prime Ministership in 2013. As Prime Minister, Mr. Rudd led Australia’s response during the Global Financial Crisis. Australia’s fiscal response to the crisis was reviewed by the IMF as the most effective stimulus strategy of all member states. Australia was the only major advanced economy not to go into recession. Mr. Rudd is also internationally recognized as one of the founders of the G20 which drove the global response to the crisis, and which in 2009 helped prevent the crisis from spiraling into a second global depression. As Prime Minister and Foreign Minister, Mr. Rudd was active in global and regional foreign policy leadership. He was a driving force in expanding the East Asia Summit to include both the US and Russia in 2010. Mr. Rudd remains engaged in a range of international challenges including global economic management, the rise of China, climate change and sustainable development. He is on the International Advisory Panel of Chatham House. He is a proficient speaker of Mandarin Chinese, a Visiting Professor at Tsinghua University and funded the establishment of the Australian Centre on China in the World at the Australian National University. He was a co-author of the recent report of the UN Secretary General’s High Level Panel on Global Sustainability – “Resilient People, Resilient Planet” and chairs the World Economic Forum’s Global Agenda Council on Fragile States. He also remains actively engaged in indigenous reconciliation.