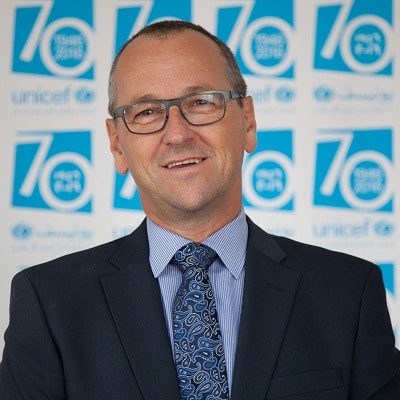 Geert Cappelaere took up the post of UNICEF’s Regional Director for the Middle East and North Africa in October 2016. He joined UNICEF in 1999 and was until August 2016, the UNICEF Representative in Sudan. Other positions held in UNICEF were Representative in Yemen (2009-2012), Representative in Sierra Leone (2005-2009), senior advisor child protection at New York Headquarters (1999-2000), senior advisor for the Central and Eastern European Regional Office (2000-2002) and UNICEF’s first Regional Child Protection Advisor for the Middle East and North Africa (2002-2005). Before joining UNICEF, he was Chair of the Belgian Royal Commission on Child Abuse and Exploitation and affiliated to the University of Gent. He actively contributed to the drafting of several international legal instruments in the area of child protection and children’s rights. He is still today a much-solicited advisor in these areas, for governments and civil society on all continents.