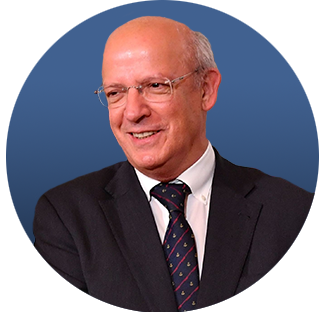 Augusto Santos Silva is a Portuguese sociologist, university professor, and politician. Since November 2015, he has been the Portuguese Minister of Foreign Affairs, in the XXI and XXII Constitutional Governments led by Prime Minister António Costa. Silva started his career as an economics professor in Porto beginning in 1981. Eventually, he worked his way up to Chair of the Scientific Council and served as Dean of the University of Porto from 1998 to 1999. Silva also served on the National Board of Education from 1996 to 1999, the Commission on Social Security from 1996 to 1998 and the Board of Directors of the José Fontana Foundation from 2002 to 2005, which is affiliated with the Socialist Party. He also represented Portugal in the Council of Europe’s Education for Democratic Citizenship project from 1997 to 1999. Silva joined the Socialist Party in 1990, and has served in a number of ministerial roles, namely Minister of Education (2000–2001), Minister of Culture (2001–2002), Minister of Parliamentary Affairs (2005–2009), and Minister of National Defence (2009–2011). He graduated from the University of Porto with a degree in history in 1978 and later obtained a doctorate in sociology from ISCTE – University Institute of Lisbon in 1992.