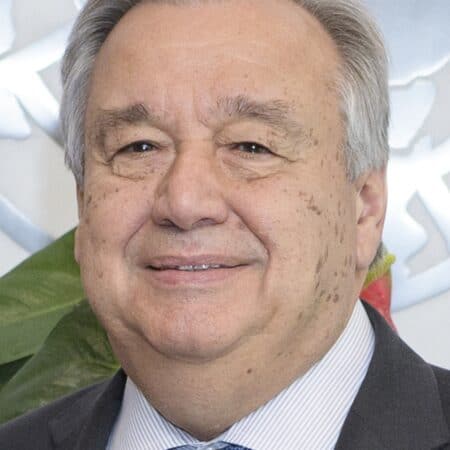 António Guterres, the ninth Secretary-General of the United Nations, took office on 1st January 2017. Having witnessed the suffering of the most vulnerable people on earth, from refugee camps to war zones, the Secretary-General has centered his efforts on ensuring human dignity for all. In a period of unprecedented global challenges, he has drawn on his commitment to the UN Charter to mobilize people and launch action to respond to the COVID-19 pandemic, address the climate emergency, advance gender equality, and achieve ambitious 21st century reforms to enhance the Organization’s vital efforts to secure peace, sustainable development, human rights and humanitarian aid. Prior to his appointment as Secretary-General, Mr. Guterres served as United Nations High Commissioner for Refugees from June 2005 to December 2015, heading one of the world’s foremost humanitarian organizations during some of the most serious displacement crises in decades and in a period in which the number of people displaced by conflict and persecution rose from 38 million in 2005 to over 60 million in 2015. Before joining UNHCR, Mr. Guterres spent more than 20 years in government and public service. He served as prime minister of Portugal from 1995 to 2002, during which time he was heavily involved in the international effort to resolve the crisis in East Timor. As president of the European Council in early 2000, he led the adoption of the Lisbon Agenda for growth and jobs, and co-chaired the first European Union-Africa summit. He was a member of the Portuguese Council of State from 1991 to 2002. Mr. Guterres was elected to the Portuguese Parliament in 1976 where he served as a member for 17 years. During that time, he chaired the Parliamentary Committee for Economy, Finance and Planning, and later the Parliamentary Committee for Territorial Administration, Municipalities and Environment. He was also leader of his party’s parliamentary group. From 1981 to 1983, Mr. Guterres was a member of the Parliamentary Assembly of the Council of Europe, where he chaired the Committee on Demography, Migration and Refugees. For many years Mr. Guterres was active in the Socialist International, a worldwide organization of social democratic political parties. He was the group’s vice-president from 1992 to 1999, co-chairing the African Committee and later the Development Committee. He served as President from 1999 until mid-2005. In addition, he founded the Portuguese Refugee Council as well as the Portuguese Consumers Association DECO, and served as president of the Centro de Acção Social Universitário, an association carrying out social development projects in poor neighbourhoods of Lisbon, in the early 1970s. Mr. Guterres is a member of the Club of Madrid, a leadership alliance of democratic former presidents and prime ministers from around the world. Mr. Guterres was born in Lisbon in 1949 and graduated from the Instituto Superior Técnico with a degree in engineering. He is fluent in Portuguese, English, French and Spanish. He is married to Catarina de Almeida Vaz Pinto, Deputy Mayor for Culture of Lisbon, and has two children, a stepson and three grandchildren.