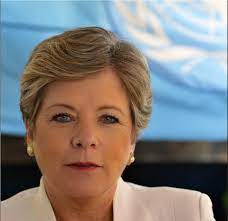 Alicia Bárcena assumed office as the Executive Secretary of the Economic Commission for Latin America and the Caribbean (ECLAC) in 2008. She had previously served as the Under-Secretary-General for Management at United Nations Headquarters in New York, Chef de Cabinet and Deputy Chef de Cabinet to the former Secretary-General, Mr. Kofi Annan. Alicia Bárcena was the Founding Director of the Earth Council in Costa Rica, a non-governmental organization in charge of follow-up to the agreements reached at the United Nations Conference on Environment and Development (UNCED) held in Rio de Janeiro, Brazil, in 1992. Alicia Bárcena holds a Bachelor of Science degree in Biology, and holds a Master degree in Public Administration from Harvard University. She has completed the courses for a degree of Master in Ecology, and has initiated studies for a PhD degree in Economics at the National Autonomous University of Mexico. She has published numerous articles on sustainable development, public policy, environmental issues, and public participation.